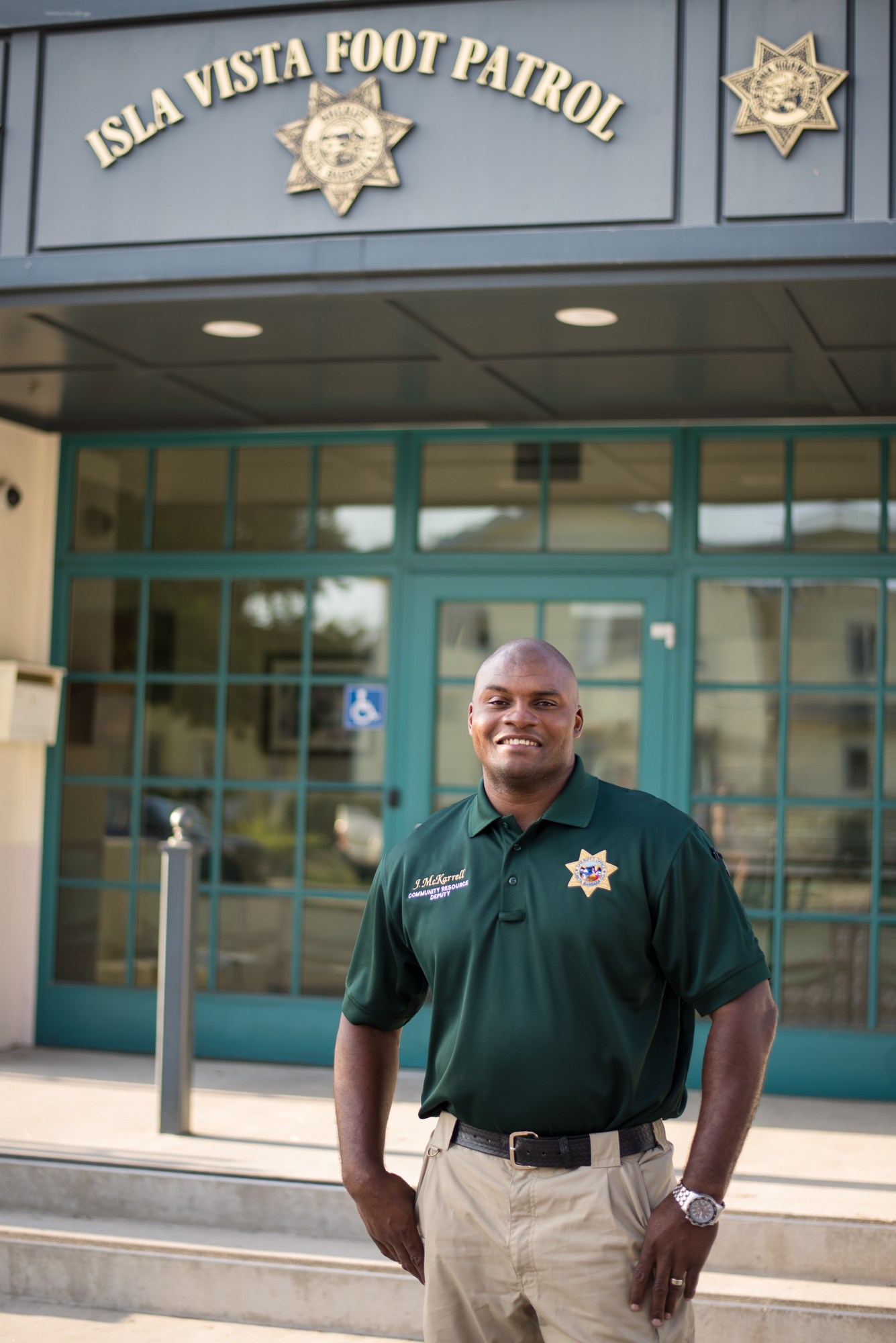 DN: Why did you choose to apply for the Community Resource Deputy position?

McKarrell: It’s not very often in this department that an opportunity is presented to work with such a diverse community … There is a lot going on here and I’ll have an opportunity to come in here and make friendships, build relationships and put a different, more positive light on law enforcement.

DN: What are some skills or characteristics you bring to the position?

McKarrell: I have dealt with community issues in the past. I’ve mentored. I just like people. I’m a Christian, so I’m an ordained deacon and part of my job as an ordained deacon is to serve … I feel at my best when I’m solving problems as a community member in serving others. So just my willingness to go above and beyond. To not put BAND-AIDs on things but to actually fix the problem is what probably sets me apart.

DN: What plans do you have to address alcohol overconsumption in I.V.?

McKarrell: Looking above and beyond law enforcement and the court system, I’m more concerned about these young adults coming out here, overconsuming alcohol, because they think it’s the thing to do, which leads to sexual assault, which leads to vandalism, which leads to everything under the sun that we’re facing out here … It’s not just penalties and enforcement; it’s a true education of what overconsumption of alcohol can do and how it can ruin lives.

DN: Sexual assault is a major topic of concern for the community. How do you plan to address this issue?

McKarrell: I am going to educate myself first and become familiar with the culture of Isla Vista and the true problems of what’s causing these sexual assaults … I want to educate people and let them know that there is so much more to the surface of what society has kind of thrown out there for us to believe about victims of sexual assault … No matter what happened up until the point when this survivor was assaulted, it’s not okay for them to be assaulted and it’s not okay for us to put them in a category or make them feel as though being assaulted was their fault in any way, shape or form.

DN: What is the biggest challenge you anticipate facing as CRD and how do you plan to overcome it?

McKarrell: I think the biggest challenge is going to be trust from both sides … Media can make cops seem as though we’re out to get everyone and sometimes the community they have negative interactions with law enforcement. Me getting with the community and showing them ‘Hey, we’re not what you think we are and we’re here to protect you’ and getting with the cops and saying, ‘I know you care about these people, but you have to understand where they’re coming from and at the end of the day your job is to protect them, and not only protect them, but find ways to help them through whatever problems they’re going through.’ The only way we are going to be able to successfully do that is be patient, listen and work together as a whole to solve whatever community issues are.

DN: How do you plan to effectively communicate with the various members of the I.V. community, including students, long-term residents and low-income Latino families?

McKarrell: I have to meet with them and I have to hear their concerns and then I can figure out where to go from there … I don’t speak Spanish, however I do have resources and if anybody wants to come forth and talk to me, whether it’s English, Spanish or any other language, I’ll use my resources so we can communicate … Something as small as a language barrier at this point, I will not allow it to stop me from helping a portion of this community that feel as though they have been left out.

DN: What are you most looking forward to as the CRD?

McKarrell: It has been a tough few years around here and I’m looking forward to the change … There are dedicated people around here. And they’re hungry. I can see it in their eyes, they’re hungry — they want a change. They want this community to thrive, they want the students to be safe, they want the residents to walk out their front doors and feel a sense of ownership … I think we can affect change in a positive manner. I have no doubt in my mind and I think we will because everybody is ready and we’re all moving in the same direction.

DN: Why did you choose a career in law enforcement?

McKarrell: When I was a kid I lived in the city of Los Angeles and LAPD would often be at my house. I didn’t grow up in an ideal situation … When they were there I felt like nothing in the world could hurt me. And because of the way they handled those situations with integrity and peace … I thought, ‘Man, how can I give back? I want to be just like these guys’ … And it wasn’t to become a cop to run, jump gates and wave my finger at people and tell them how wrong they are. I became a cop to do what I am doing now. To build bridges, strengthen communities and just shed a different light on what it is we do in law enforcement.

McKarrell: No, for two reasons. One is it’s really expensive, and two, my wife wouldn’t dare. She will not commute to work; we already talked about moving closer and she likes her little 10 minute drive. I defer to my wife, because she is the boss.

DN: What message would you like to communicate to the I.V. community?

McKarrell: We are doing our best at the sheriff’s department to bridge that gap. We hear them, we know their concerns and at the end of the day if you know anything about us, know that we care and we’re here to serve them. I know it doesn’t seem like it all the time, but we’re only trying to make sure that everyone in the community of Isla Vista gets home safely. We owe that to the community, we owe that to their parents and we owe that to the badge that we wear. 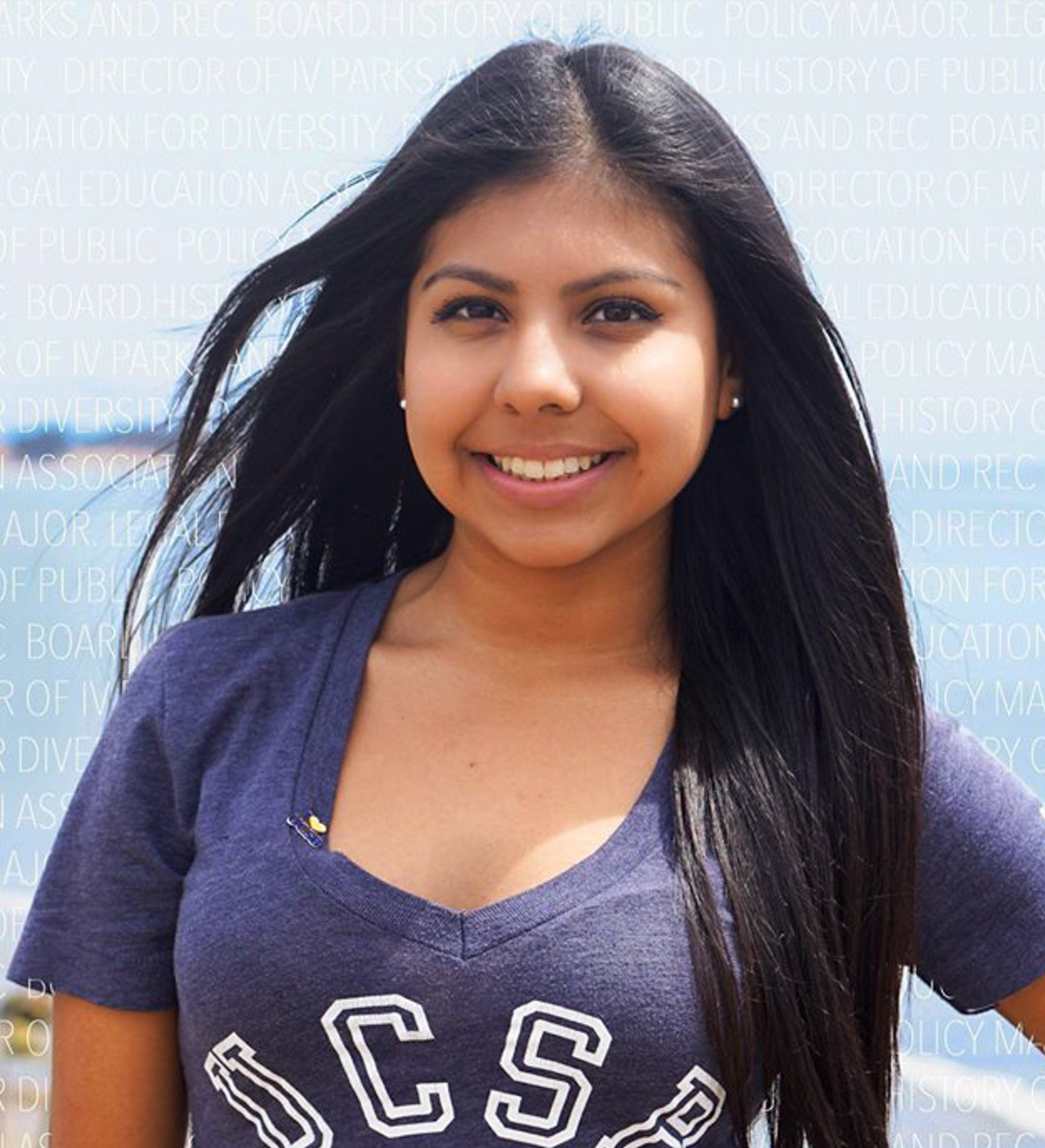 DN: What was your first impression of McKarrell?

Dela Cruz: My first impression of him really was, ‘what a friendly man’ … We really want someone who is the friendly face of the Foot Patrol because often times students don’t go to the officers when they need help because they fear that they will get in even more trouble … He’s such a great listener, really a great, great listener, and on the other side of that he is willing to learn and to accept any mistakes that he makes and is willing to have anyone come to him and share with him any articles or any trainings that he should take.

DN: What are some of the key issues facing Isla Vista that you plan to work with McKarrell on?

Dela Cruz: One is sexual assault. And this was brought up during the discussions and some tension did rise. But like I said, his ability to understand that he and the Foot Patrol can be wrong and to realize that changes need to be made to me really speaks positively on behalf of himself and the Foot Patrol … I hope to work with him and really bring out creative and innovative projects that address sexual assault and specifically working with survivors. 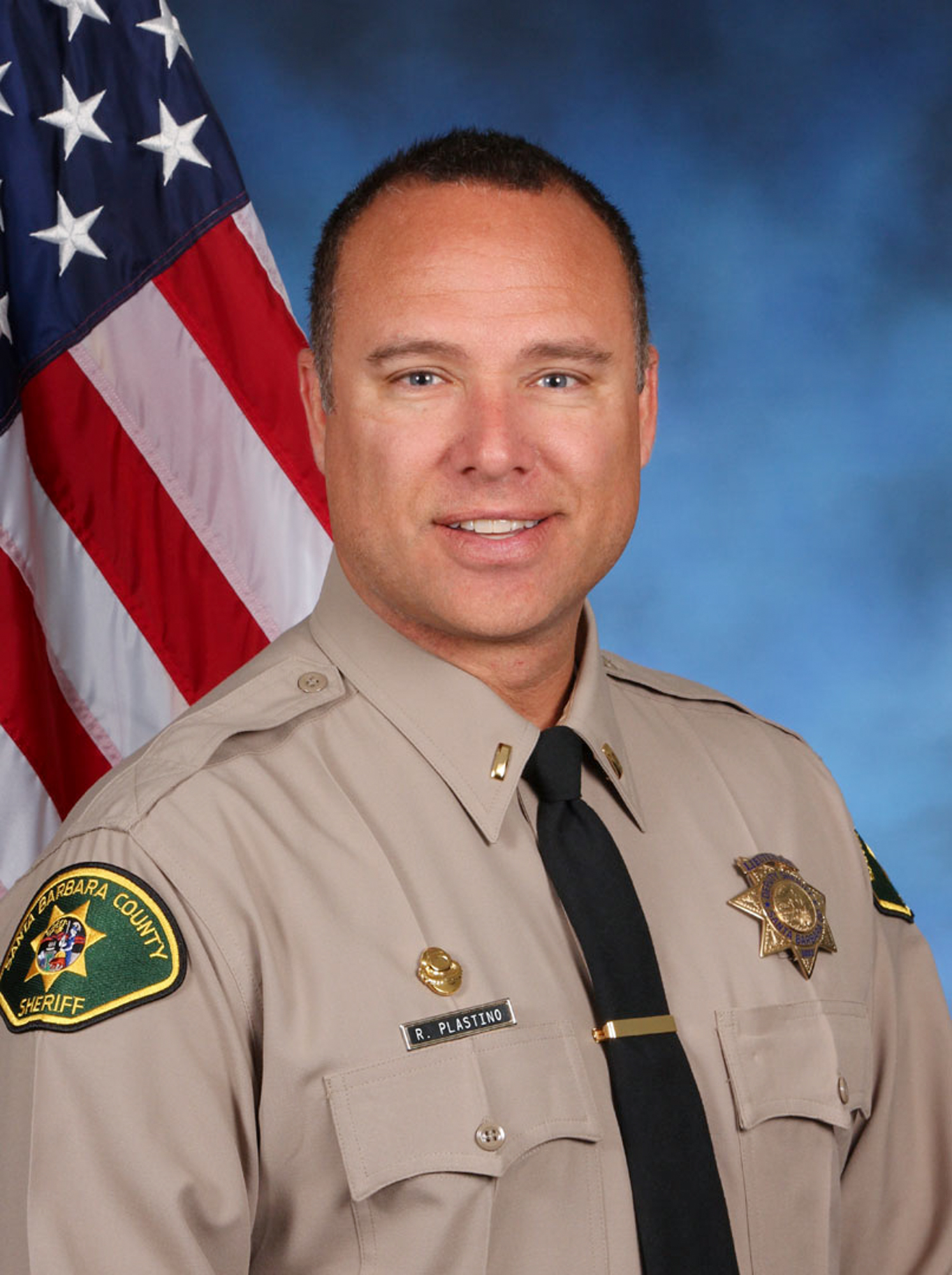 DN: What type of training will McKarrell undergo to prepare him for the position?

Plastino: James will be given whatever training he requests, with finances being the only potential obstacle.  He will also have flexibility with his schedule to attend trainings. As an example, last week UCSB offered to send James to Green Dot training on campus this week. We adjusted a few things so James could attend this incredible opportunity to learn sexual violence prevention strategy … We will rely heavily upon the community for input into what they think is needed.

DN: What skills or characteristics set McKarrell apart from the other CRD applicants?

Plastino: James and I have known each other for almost 10 years now … He is someone that can relate to people. He has this ability, I think, because he has a very unique background, has overcome incredible life challenges and genuinely likes people … Each of the four deputies that applied for the position were all great choices. Each brought their unique skills and abilities to the panel, and they all presented well. However, at the end of the testing, the panel chose James based on his creative solutions to the problems in Isla Vista, his willingness to be open to new ideas and his ability to communicate these things effectively. 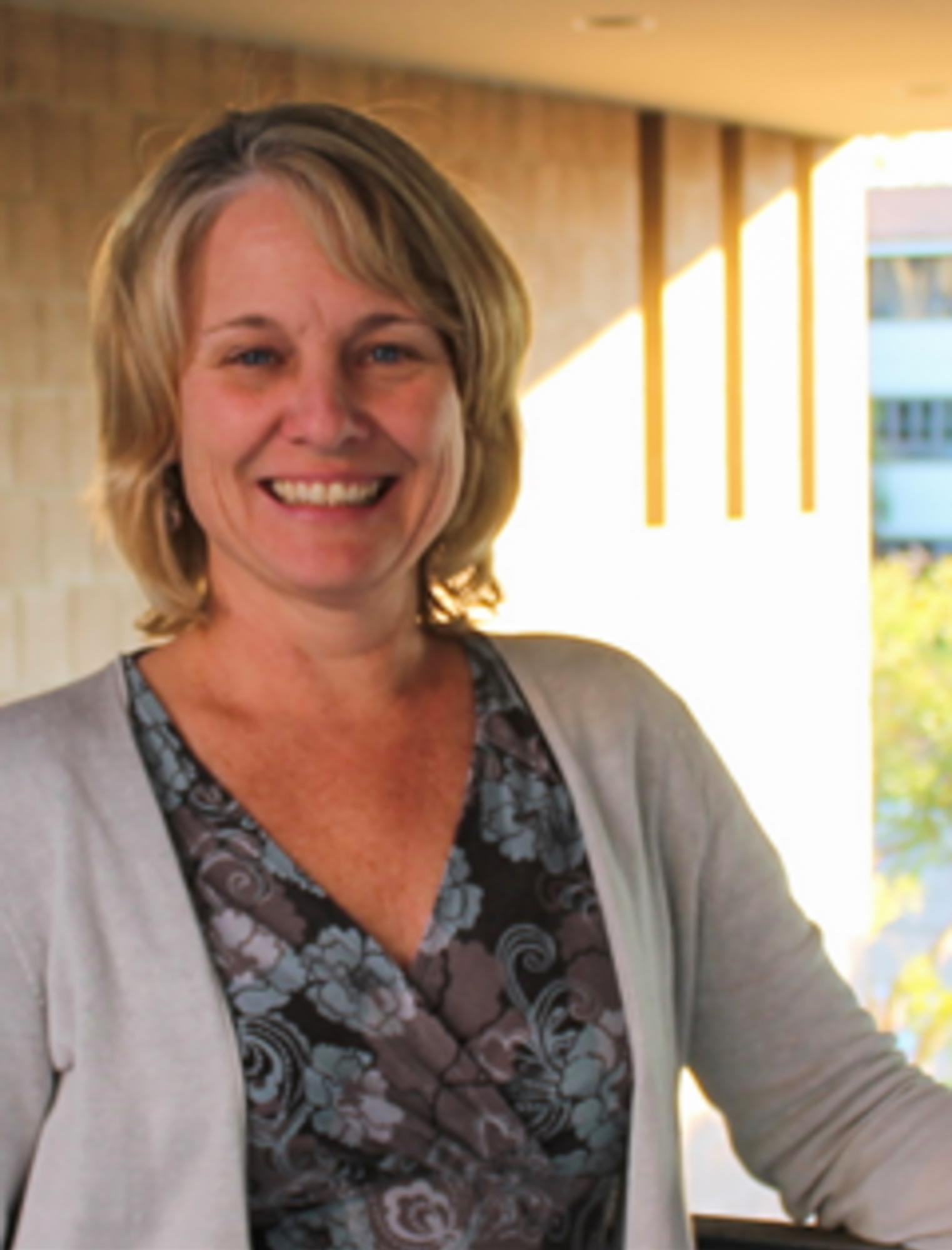 DN: How do you anticipate McKarrell will work with the university administration?

Fleming: They [IVFP] come to major events and meetings that Katya Armistead, who’s the Associate Dean for Student Life … He did say that his schedule is flexible, so that he can work nights. I mean a lot of those meetings in the community happen at night. Our meetings at UCSB will probably be more during the day … He’s not going to be able to be everywhere and stick to 40 hours a week. But it sounds like he is going to be included in many of the meetings that we already have so that we have not just the Lieutenant but also Deputy McKarrell.

DN: What should McKarrell keep in mind when working with the various groups in I.V.?

Fleming: There’s this perception of I.V. from the outside of not being diverse; it’s this sort of student community, when in reality, I think those of us that work with it all the time know that it is really diverse, and that makes it harder to go in one particular direction. He’s going to have to attend to a lot of different needs and sometimes they’re going to be in conflict with one another and I think that is going to be a challenge. But he seems like he’s up for it. I think he has the right kind of approach in terms of his communication skills.

A version of this story appeared on page 4 of the Thursday, August 27, 2015 print edition of the Daily Nexus.