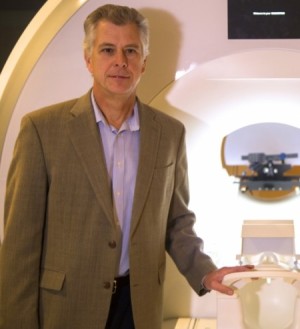 Scott Grafton stands in front of an MRI scanner, a device which may one day be able to diagnose traumatic brain injury with insights from his research. Photo credit: Spencer Bruttig

Imagine awaking in an emergency room. A doctor assures that you have suffered a mild concussion from an early morning bike crash, and that you’ll be back attending class in no time. But a week or two later, you discover you have trouble focusing, finding the right words, and it still seems like a black curtain was reeled over the morning of your crash. In these cases, tracing the effect of brain trauma to an impaired function within the brain is largely obscured, but remains at the heart of UCSB Professor Scott Grafton’s latest project.

“Mild concussions are not major traumatic events … most people are better within a week and back to themselves, but about one in 10 people are not. That’s who we’re interested in,” said Grafton, who was recently announced as one of the six final grant recipients of the Head Health Challenge.

The grant was born out of the Head Health Initiative: a partnership consisting of many parties, including the U.S Military, NCAA and Under Armor, but with leading sponsorships coming from General Electric and the NFL. The NFL’s role in the partnership is not surprising considering the history of lawsuits filed against this association for concussion injuries.

As part of their open innovation program, the Head Health Initiative is investing up to $20 million in supporting three categories of projects or challenges: those that improve the diagnosis of mild traumatic brain injury, those that advance measures of brain protection and those that develop impact mitigating materials and technologies in sports.

On July 23, Grafton and his team were named as one of the six final winners of the $10 million Head Health Challenge I, receiving an additional $500,000 grant to pursue their work in developing methods of diagnosis and prognosis of mild traumatic brain injury. Their initial award of $300,000 was announced in January of last year as one of the 16 first-round winners of the challenge.

Interest in this area of health science arises from the current limitations of diagnosing and detecting mild traumatic brain injury in patients, even with state-of-the-art clinical technologies.

“Conventional MRI … is not powerful enough, it’s not sensitive enough. Only about three percent of concussion patients will actually show anything at all … it’s just not very reliable,” Grafton said.

With aid from the first wave of funding in 2014, Grafton began work on his approach of constructing a network of standard brain interconnections, which sprawl through the region of white matter in the brain.

“You plop yourself in the white matter at a specific location and you ask yourself: what is going through my little volume? What are all the tracks that run through here? Where do they all go to? Make a list of all the pairs that get hooked up. Now do that everywhere in the entire brain,” Grafton said.

In collaboration with the Department of Computer Science at UCSB, Grafton and his team were able to build a unique software platform that generated a map of those intersections. The comparison of this standard brain network to that of a patient’s suffering from mild brain trauma would allow scientists — and ideally doctors — to identify any abnormalities and diagnose the injury.

“It’s this exhaustive list of no matter where you are, you know what ought to be going through there,” Grafton said. “If I’m at this intersection, I ought to have a road that goes from Milwaukee to Chicago. What if it’s not there?”

Grafton received his second grant from the Head Health Challenge after presenting on the progress of his sponsored research project during a site visit.

“GE was interested in new tools, so the next wave of funding from them is to really make that tool easier to use,” Grafton said. “The problem is that the data is so big it’s really slow. To ask it a question, it’s like 19 hours later so [we want to] make it fast and have it work on the cloud so anyone can get at it.”

Though the software was developed to look at brain trauma, the foundation of this work also has applications in diagnosing and understanding other neurological disorders.

“The beauty of this is even though the funding is really to build this tool for head trauma, it’ll also be useful to look at all kinds of neurological disease, looking at individual differences in people: men vs. women, old vs. young, as well as developmental disorders,” Grafton said.

I am an associate of Michael Ditmore/Novim, a diagnostic radiologist by training, teach at UCR medical school and am very interested/active in TBI. I am in Santa Barbara often and would like to be active in your research.