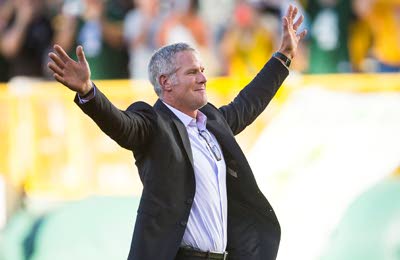 Brett Favre never thought this day would occur. After leaving the Packers in 2008 to play three more seasons with the New York Jets and Minnesota Vikings, the 45-year old feared he’d never step foot on Lambeau Field again. But the Green Bay legend was proved wrong last Saturday as more than 67,000 “Cheese Heads” celebrated their former quarterback’s induction to the Packer Hall of Fame.

Such a nostalgic feeling, this moment couldn’t have felt more suitable for the legendary Packer. After being drafted in the second round and spending just one season with the Atlanta Falcons, Favre found a home in the city of Green Bay after being He was traded from Atlanta to Green Bay in 1992.

It wasn’t long until the quarterback from Southern Mississippi made his mark on the Packer team and steered their struggling franchise back in the right direction.

Prior to the Favre era, the Packers had only two playoff appearances under their belt since their run with the great Vince Lombardi. A plague of losing seasons overtook the franchise and changes were made with the hiring of Head Coach Mike Holmgren. With a new coaching staff in place and a gun-slinging quarterback at the helm in Brett Favre, the Packers brought back a competitive spirit to their hometown.

Green Bay made its first postseason appearance since 1983 after the quarterback’s arrival. Favre led the Packers to a total of 11 playoff runs, finishing with the record for most passing yards, touchdowns, and pass completions in team history.

With this type of resume, not to mention a record of 160 wins as a Packer, Favre rightfully deserves a seat next to the yellow and green greats.

Brett Favre is one of six Packers ever to have a banner hanging in Lambeau Field. With a stadium that features some of the greatest football athletes to play the game like Bart Starr, Reggie White, and football mastermind Vince Lombardi, “It’s quite an honor”, Favre said. “When you look at the players that go into this [category] and to be a part of that it’s hard to put into words.”

Favre’s sixteen years of two minute drives, Super Bowl runs, and “Lambeau leaps” as a Packer outweigh his decision of exiting retirement and joining the rival Vikings. Sure some hearts were broken since his seven-year split with the team, but from this moment on that is water under the bridge. Favre’s return brings him back to his true home and his remembrance in Green Bay will forever be a grateful one.

While the fans pay tribute to his career in a green and yellow uniform, it is Favre himself who is really saying thank you. The three NFL MVP awards, Superbowl XXXI ring, and career in the NFL are accredited to the loyal fans of Wisconsin and their support throughout the years. Through triumph and adversity, they stuck with the Southern quarterback from Gulfport, Mississippi.

Brett Favre has accomplished many milestones since his start in the NFL. The 19-year veteran has surpassed greats in records, been at the highest pinnacle of football, and distinguished himself as one of the greatest quarterbacks to ever step foot on a field. But having his No. 4 jersey hung up in Lambeau has to be the sweetest victory of all. After facing boos and chants of “traitor” while being a Jet and Viking, Favre assumed that would be the end of his journey in Green Bay. But last Saturday surely put his fears to rest as his journey lives on as a Packer. From this day on he will never be forgotten as one. The induction ceremony was a day full of the cheers and chants that Favre had become accustomed to while in Green Bay. With that entrance and induction, the Packer legend explained, “it was like I never left.”