The Daily Nexus
Sports Blogs
Lakers and Kings: Old Rivals Looking to the Future
July 12, 2015 at 5:00 am by Elliot Thornton 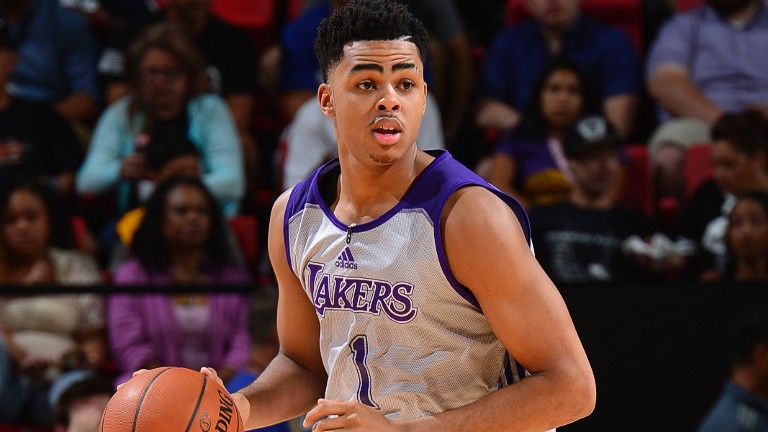 D’Angelo Russell of the Los Angeles Lakers / courtesy of nba.com

The 2015 NBA draft class is jam-packed with raw talent hungry for the big stage. Last year, the West was dominated by the reigning champion Warriors of Golden State, but now the records have been reset and a new chapter of NBA basketball is already upon us.

While taking down the versatile Warriors squad will be no easy task, the Pacific division’s rookies from Sacramento and Los Angeles will do their best to give Steve Kerr’s unit a run for its money. Let’s analyze these west coast picks as they look to prove themselves to the rest of the NBA.

Following one of the worst seasons in franchise history, the 21-61 Los Angeles Lakers were begging for a miracle entering this year’s draft. Their wish was granted as they received the second overall pick and one of the most talented premiere guards in D’Angelo Russell.

This 6’5” 190 lb point guard is everything general manager Mitch Kupchak could want and more at the guard position.

Russell excelled in his first year at Ohio State, starting all 35 games for Head Coach Thad Matta and averaging a conference best 20.3 points per game. Russell’s average stands as the most ever by a Big-Ten freshman.

When it comes to bright lights and big stages the Louisville native is your guy. Russell had one of the best NCAA Tournament opening performances in the country, dropping 32 points, including 28 straight big ones, to carry his Buckeyes to an overtime victory over VCU. Needless to say, Russell will offer vital shooting and ball handling for this stagnant Laker offense.

So he can put the ball in the hoop, big deal. But what makes this guy the 2nd overall pick in this year’s draft?

Critics are skeptical why a postman-lacking Laker team would pass up a big with great potential like Jahlil Okafor. Will Russell hold his ground against bigger veterans like D-Rose and John Wall?

Those point guards are proven playmakers that can handle the rock and make savvy decisions in crunch time. What critics fail to realize is Russell is the epitome of this breed of point guards in a combo guard package.

His exceptional passing can be attributed to his tall frame, seeing over defenders and making the tight pass. His craftiness with the ball dismantles backcourts as he makes his move to the basket. While Russell’s discipline asa defender needs a little more tightening, he has all the intangibles you could want for a young rookie.

Russell’s skills will be a great addition for 5-time champion Kobe Bryant and his staff. As the era of the Mamba comes to a close, the time is now for 19-year vet to take the rookie under his wing.

And with the return of Julius Randle as well as free agents Lou Williams and Roy Hibbert setting their sights for the city of L.A., the future looks very bright for the Lakers.

From So-Cal to Nor-Cal, we find another team that has had the shorter end of the stick the past couple of years in the Sacramento Kings, who have struggled to make a dent in the playoffs following their run with Mike Bibby, Chris Webber, and Vlade Divac in the early 2000s. But L.A. isn’t the only team cooking something under its sleeves.

The Kings took 7-footer Willie Cauley-Stein as the sixth overall pick this year and are excited to utilize this big center alongside team captain Demarcus Cousins.

The Kentucky Wildcat put himself on the map last year with his ball-hawking defense. Cauley-Stein racked up an impressive 1.9 blocks and 6.7 boards per game and earned himself the SEC Defensive Player of the Year award.

While the big man was mainly used for defensive purposes his junior year, Cauley-Stein has proved he can create his own shot if need be and become an excellent big man to feed down low.

Don’t believe me? I’ll let his career best 21 point, 12 board, 5 steal stat line over the 6th ranked Texas Longhorns do the talking. Cauley-Stein led the Wildcats to a 63-51 victory that night going 6-11 from the field including 9-11 from behind the line. This was a defining moment during his college career, turning the heads of NBA scouts and sending Longhorn fans back to Arlington with their first loss of the season.

Aside from his skillset, the Olathe, Kansas native has a motor similar to what we see from a big like Joakim Noah or Dennis Rodman. He lives for the fast break plays, the fights for loose balls, and anything that gets the crowd out of its seats. Whether it be a testament to the mastermind John Calipari or just his own demeanor, there is no doubt that the 21-year old will bring it every time he steps out on that floor.

Fitting a creative Calipari platoon system, Cauley-Stein can adapt to a strategic setting and prosper. This will probably be the game plan for coach George Karl as he builds around the pieces of Cauley-Stein, Cousins, Rudy Gay, and newcomer Rajon Rondo.

With the recent success of the Warriors and their first championship since 1975, the Pacific Division has been nothing but a stomping ground for Steve Kerr and his talented crew. This year’s draft looks to put an end to their run as a batch of skilled rookies emerge from these inner division rivals.

They have shown what it takes to play at the next level, dominating college play with their size, savviness, and ability. Now the ball is in their court to take this opportunity and turn their franchises back into the flourishing teams they once were.