The Daily Nexus
Sign of the Times
Boko Haram: Why We Should Care About the Islamic State in Africa
June 25, 2015 at 10:16 am by Nik Frey 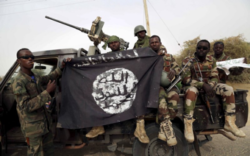 These days, American news coverage tends to follow a pattern. It tends to go like this: Follow a tragedy or international event for a select period of time, and then move on to “the next big thing” before viewers start changing the channel to another news station with more thrilling content. In terms of international news coverage, this seems to be especially true when it is American interests at stake. Perhaps this is why so much media attention has been centered around the Islamic State (of Syria and Iraq) as of late, and not their equally evil brethren in West Africa: Boko Haram. While we, of course, should care about the fact that much of the territory our soldiers have fought and died for to win over the fledgling Iraqi government is now falling into the hands of the utterly deplorable ISIL, the international community should also be sharing the same amount of concern regarding their equally sadistic new partners in northeastern Nigeria: Boko Haram. This self-proclaimed radical Islamic group is committed to fulfilling their new goal of installing an Islamic caliphate in the territories currently surrounding northern Nigeria. Like ISIL, they are committed to doing literally anything to accomplish their mission — even if it means slaughtering innocent Muslim women and selling little schoolgirls into sexual slavery. While they recently pledged allegiance to ISIL, I will still use the term “Boko Haram” to refer to these guys for the remainder of this article to differentiate the two.

If you’re not familiar with these monsters, you should be, because every day that the world looks away, the radical group formerly known as Boko Haram continues to murder innocent people and steal children from their families, using them as child soldiers in their own twisted struggle to carry out ISIL’s mission in Africa. So why isn’t the western world rallying to defend Africa’s most powerful economic nation (Nigeria) or sharing the same amount of concern about Boko Haram as they do for ISIL? The interesting thing is that these guys were already famous … and were promptly forgotten once the world figured out it would take real military action and political work to stop them.

Do you remember the “Bring Back Our Girls” hashtag campaign? This social media campaign brought Boko Haram into the international spotlight after Boko militants kidnapped hundreds of girls from their schoolhouse in Chibok, Nigeria. However, the world’s keyboard-warriors seemed much more interested in spreading awareness than actually doing anything about it. The campaign did very little to mobilize a necessary military advancement towards Boko Haram while the Nigerian president at the time seemed much more infatuated with the prospect of reelection than bringing Boko Haram to much-needed destruction. In fact, the campaign really just prompted more violence on Boko Haram’s part in northern Nigeria and neighboring Cameroon. My guess is that if you were to ask an average American today who Boko Haram is, where they operate or what they stand for, you would get nothing more than a blank stare. We can thank international news coverage quite a bit for this as well; once they realized it would take a long, bloody counterinsurgency against Boko strongholds in Nigeria’s Sambisa forest rather than just a few hashtags on Facebook to stop these guys, the media quickly turned its attention to “more exciting” news … like Tom Brady’s deflated balls. I find it interesting that most Americans are much more aware of this than the systematic slaughtering of thousands of innocent people.

My guess is that if you were to ask an average American today who Boko Haram is, where they operate or what they stand for, you would get nothing more than a blank stare.

Thankfully, there’s a new sheriff in town. Nigeria recently elected a president named Muhammadu Buhari who, despite a rather authoritarian track record as a military dictator of Nigeria in the 1970s, is hell-bent on uprooting Boko Haram from their holes in the ground and bringing lasting peace to war-torn northern Nigeria. Unlike the former president, Buhari isn’t waiting on the slacktivist international community to step in and help out — he’s taking matters into his own hands. In fact, Nigeria’s army has consistently been making military advances against Boko militants and pushed them almost completely out of northern Nigeria. Now that Nigeria has a leader with this kind of commitment to solving its own problems, I think it’s time the international community steps in and helps Nigeria defeat Boko Haram once and for all.

However, the battle is far from over. Now that Boko Haram has officially proclaimed itself as the African wing of ISIL, they will likely be gaining new recruits from North Africa and channel their efforts into slaughtering innocent women and children in neighboring Cameroon and Chad. As the new economic and political powerhouse of Africa, Nigeria must also continue to uproot Boko militants in neighboring regions and the international community must be willing to step in and provide both aid and soft military support (ammunition/Special Forces advisors) if necessary. As the war with ISIL rages on in the Middle East, this war will likely rage on in West Africa. America should not be expected to fight everyone else’s war, but the reality is that now, thanks to Boko Haram’s new partnership with ISIL, a fight against Boko militants is indeed part of our war “to destroy and degrade ISIS.” Furthermore, as American civilians living in an increasingly connected world, the very least we can do is educate ourselves on the issue. Innocent people are dying, and we should care … a lot.

I’ve got a novel idea. Let’s do nothing. Let the Muslims deal with their own problems for a change. Let’s let countries like Saudi Arabia, Qatar, Kuwait with their endless ocean of money and Western-bought armaments figure it out instead. Surely they – being practitioners of the religion of compassion and peace – will step right up to the plate in our stead. OK, you caught me there. You knew I was kidding! You knew what I know which is that there is no answer to these Islamic cesspools. Whatever we do will be discredited and if we do nothing… Read more »

Hey Arafat. While I agree with you that radical Islam provides enormous challenges to national growth, I don’t think we can discredit Nigeria as a “Saudi Arabia” or “Kuwait.” Nigeria is currently Africa’s largest economy and is a vital beneficiary to its neighboring countries in west Africa (as a trade partner and “good neighbor”). Furthermore, Boko Haram may be militantly Islamic but much of Nigeria’s northern frontier is religiously/ethnically heterogeneous, comprised of both Christians and Muslims living in peace together (as an example). Thus we cannot ignore the legitimacy and potential that Nigeria has as a nation, nor can we… Read more »