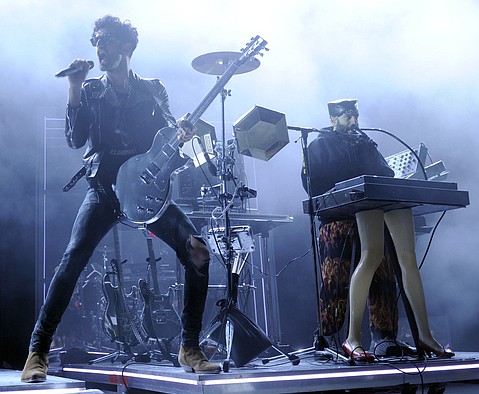 Chromeo and The Glitch Mob share a penchant for retro-futurism. Yet the manifestation of this is so vastly different between the groups it’s almost jarring to see them on the same bill. The Glitch Mob is all aggressive machinery — a visual aesthetic borrowed from the film Blade Runner and the Fallout series of games, a musical aesthetic borrowed from Metallica. In contrast, Chromeo’s ’80s nostalgia synth-pop is all danceable grooves and lover boy sentimentality — an aesthetic much more human than machine. Yet somehow they complimented each other well, and along with supporting act Com Truise, delivered a fun and funky evening this Saturday at the Bowl.

It was still sunny and warm for Com Truise’s opening set at 6:30. Dressed in black with his signature combination of tightly cropped hair and full beard, the producer deployed groovy computer pop confections for the still meager crowd. Though most of the audience early enough for his set seemed more interested in securing good spots for the following acts, Com Truise delivered a sonically delightful performance.

Bass-y rumbles began to emanate from the stage almost as soon as the New Jersey-based producer walked off it. The atmospheric sounds built and layered upon each other as Com Truise’s equipment was removed to reveal a large, mysterious structure covered in a black sheet. As the noise reached a crescendo, the sheet was dramatically thrown off to release a cloud of smoke and reveal “The Blade” — The Glitch Mob’s “interactive instrument and art installation.” The Blade features three stations outfitted with MIDI controls and iPads, as well as machine-like “drums” to the rear. These allow the Mob to actually play their music live and switch roles and instruments mid-song.

“I’ve seen The Glitch Mob five times, and every single time, they have a totally different set-up,” Don Lucas, a UCSB alumnus attending the show, said. “That’s one of the reasons I love seeing them. And what they’ve got now, with The Blade, it’s completely unique. No one else has something like that.”

Glitch Mob members edIT, Ooah and Boreta opened with their instantly recognizable “Mind of a Beast.” Behind them, a large screen displayed visuals choreographed to match each song. The Bowl’s extensive light set up was fully utilized from the get-go despite the fact that the sun was still up — the constant presence of theatrical smoke helped make the light show visible in spite of daylight.

The crowd, initially unprepared for the sudden blast of lights and sound, started to get into it by the second song (“Our Demons”). An Egyptian-inspired statue of a hooded woman in space with lasers coming out of her eyes rotated and morphed on the screen. “Alright everyone, get your hands up! Let’s touch the sky!” Ooah shouted just before the song dropped.

“Santa Barbara Bowl, you’re looking beautiful tonight,” Boreta proclaimed midway through the set. “This is my hometown, I grew up here. So this means a lot.” The crowd cheered appreciatively in reply.

It was surprising to see only about a third of the audience dancing during most of Glitch Mob’s set. Though everyone seemed entranced by the spectacle of the performance, most of the crowd wasn’t interested in raging their faces off. This goes against what one might expect at a Glitch Mob show, but was not at all disappointing.

A 30-minute intermission gave the crowd enough time to make it to the front of lines for drinks and food. After sunset, a sudden flurry of strobe lights, fog and sound announced the arrival of Chromeo. As the sound and strobes built, a three-syllable chant began: “Chrome-ee-oh, oh-oh” went the crowd, over and over. Then the duo broke into “Night By Night” for their first song.

Dressed in a leather jacket, black skinny jeans artfully ripped on one knee and tan suede shoes, singer/guitarist Dave 1 (aka David Macklovitch) is the attention-loving entertainer of the duo. He would come close to the crowd to solo for his adoring fans, jump all around the stage, feature pelvic gyrating prominently in his dance repertoire and talk frequently to the audience. P-Thugg, clad in flame print harem pants and a black sweatshirt, stayed mostly within the space between the five synths surrounding him. Occasionally he would leave it to play bass.

Chromeo’s stage set-up featured three synthesizers for Dave 1 (in addition to P-Thugg’s five) and for each member, a pole-like structure containing drum pads and symbols. The two synths facing the audience were perched on light-up stands in the shape of women’s legs. The raised floor beneath them light up around the edges in a variable color scheme to match the stage lights, which was a cool effect. For every song the stage technicians pulled out all the stops with regard to the light show. During “Momma’s Boy,” a light was aimed at Dave 1’s reflective guitar to allow him to point it dramatically (and euphemistically) at audience members while he soloed.

“I just want to give a shout out to the ladies on shoulders in the crowd right here” the guitarist said, smiling. “You know what guys, be courteous, find a girl nearby and pop her on your shoulders.” At Dave 1’s continued encouragement, most of the pit and a good portion of the seated sections were soon full of girls on shoulders.

The crowd grooved and danced through every one of Chromeo’s songs. Never more so than during “Jealous,” arguably the catchiest song they have written to date. The crowd protested in surprise when Dave 1 and P-Thugg abruptly stepped off after “Jealous,” demanding an encore that, frankly, seemed certain to come.

A few minutes of cheering at the empty stage and Chromeo returned to play “Fall Back 2U” for the delighted crowd. Dave 1 gave a shout-out to The Glitch Mob before closing with their first hit “Needy Girl,” accompanied by a rather overwhelming chaos of strobe lights.

UCSB alumna Christina Cobos mentioned after the show that she attended primarily to see Chromeo. She was impressed with what the duo could do considering they were only two people and thought the light show was awesome. “Jealous” was her favorite song.

Though the crowd seemed most enthusiastic toward Chromeo, all three acts gave excellent performances. Each transported the audience into their own unique retro-futuristic fantasy world, and as the best concerts do, allowed people to get lost in the experience.