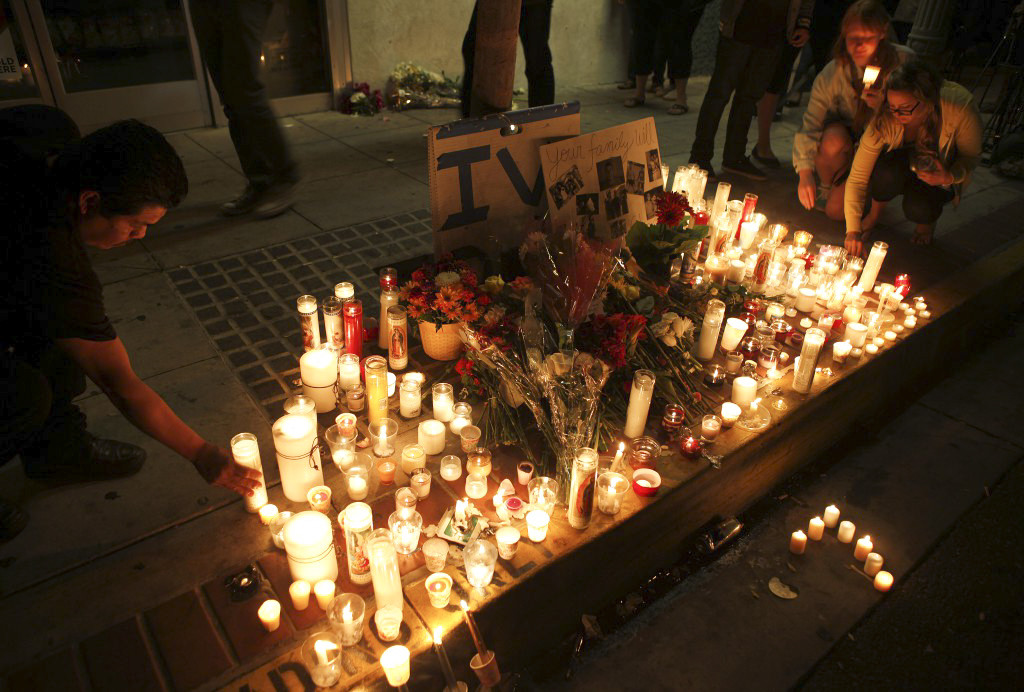 Two musicians performed silhouetted against the blank cyclorama at the back of Lotte Lehmann Concert Hall. Projected upon them as the music started were two halves of a rectangle, one side white and one side black. Following the music perfectly, images of a rose, leaves and other organic matter began to appear in each half. Though not identical, the two halves were complimentary, and a red accent began to appear in the design as the music turned more aggressive.

This was Federico Llach and Gary Goldberg’s This Time Around, with the video projection designed by Gary Goldberg. The two musicians were flautist Adriane Hill and Llach himself on the double bass. Llach and Goldberg write in the program that they were inspired by the idea of opposing cycles. The flute and the double bass are “instruments of extreme ranges and by exploring the brightest and darkest colors, the emptiest and most saturated textures, the lowest and highest registers.”

Llach was one of 11 graduate composers who presented Music in Memory Sunday night in remembrance of last May’s tragedy. Brandon J. Rolle introduced the show as a reflective response on the part of the composers, each demonstrating their own healing process.

“There is no right or wrong way to grieve, to remember or to pray.” As part of a trio with Rolle’s composition, prayer, Fernando Rincón Estrada presented de la ausencia, la esperanza, de la esperanza, la fortaleza; translated to English, the title reads ‘from absence hope, from hope strength.’ Estrada’s music had a breathy quality, though three of the four instruments were strings. Like many of the pieces performed, Estrada’s composition was accentuated by silences between phrases of music, serving to increase the significance of every note. A percussive twist was assigned to cellist Kathryn Carlson, who struck her cello with her fist between sections of music to create a hollow, resounding beat.

In addition to the classical instruments, certain works presented employed the use of electronics to enhance or create varying sounds. David Gordon set his composition Echo to a video of various bodies of moving water. Ripples, waves, and cascades of water contrasted with the tense, occasionally eerie music, though the work as a whole maintained a calm and collected feel.

The serenity of Gordon’s composition was a repeated theme in the performance, for the most part unbroken until composer Heena Yoon’s Fugue and Variations. Performed by four strings, a beehive-like frenzy diverged from the tranquility, charging the atmosphere with a tense, energetic mood. The difference brought to attention the more passionate and angry side of loss.

The composers drew inspiration for their pieces from many places, among them Buddhism, famous poets and original poems. Nick Norton, who composed a piece he named Elegy II, told the audience “I tend to ask musical questions [when I compose] … but this piece asked an emotional question. I attempted to ignore all the questions and just write.”

A solo composition, Jordan Warmath on the viola began as a lonely melody echoing throughout the concert hall. After a minute, however, the music asked her to play two strings at a time, which created the auditory illusion of someone else on stage with her. It seemed to be a musical showcase of the efforts we make to maintain the presence those who have passed.

Music in Memory is one step amongst many that the students and faculty of UCSB have been taking to heal from the events of last May through art and through community. Though the audience Sunday night was not large, it was an open-hearted gathering of people choosing music as a path forward.