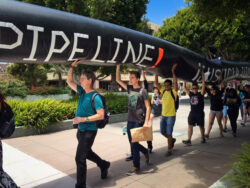 Members of various environmental organizations, including Fossil Free UCSB, gathered outside Cheadle Hall Thursday afternoon to protest for the UC Board of Regents to divest from the fossil fuel industry.

Protesters marched from Cheadle Hall through the Arbor to the patio behind the MultiCultural Center (MCC) carrying a plastic model of a pipeline and chanting, “We are unstoppable. Another world is possible.” The protest continued with presentations from event organizers demanding the UC divest from companies involved in oil spills and invest in students, followed by public comment from faculty, alumni and students on their frustration over the May 19 Refugio oil spill of over 100,000 gallons and the environmental damage caused by the fossil fuel industry.

Member of the California Students Sustainability Coalition and the Students Against Fracking campaign and UCSB alumnus Arlo Bender-Simon said he is frustrated the money he paid to the UC during his four years at UCSB is invested in the fossil fuel industry.

“The money that I have put into the UC system over the last four years is being invested into fossil fuel companies that continue to profit off of disastrous spills,” Bender-Simon said. “We really need to let our regents, our campus administration know it’s not ok for them to keep investing.”

“It’s a symptom; it’s just one piece of a much larger pattern that we see with the fossil-fuel-powered economy,” Williams said. “The root cause is this industry and, as it turns out, our university invests a lot of money in ExxonMobil, whose oil is being carried in Peabody [Energy] coal and a lot of these huge culprits. So we’re demanding that the university stop investing in these fuels and start investing in students, and start investing in our futures.”

The UCSB Academic Senate voted in favor of fossil fuel divestment in 2013 and Fossil Free UCSB is now working to gain Chancellor Henry T. Yang’s support of the movement, according to Williams.

“On campus, we are really focusing on getting Chancellor Yang to come out and support his students and faculty, because all these different bodies have already come out in support of it,” Williams said. “We know we have the finances behind us, we know we have the morals behind us, let’s go back into negotiations and get this thing to happen.”

Students Against Fracking Chair, Fossil Free UC and Environmental Affairs Board member and fourth-year global studies major Kiyomi De Zoysa said she views the recent spill as an opportunity for the community to change its opinion about investing in the fossil fuel industry.

“Especially at the UC, we’re complacent; we’re supporting Exxon, and Exxon’s product is what directly spilled into our environment,” De Zoysa said. “So we are directly invested in Exxon’s work. So, by that, we need to not be involved in it and make a political statement, social statement. It’s a moral imperative as the world’s greatest public institution.”

Bender-Simon said Students Against Fracking aims to use the oil spill to mobilize students to participate in the movement to divest.

“We’re trying to figure out how we can really educate people about what fracking is, what steam injection is, what acidizing is, why we really don’t need to be doing all these newer, dirtier, more energy-intensive extraction techniques and why we need to move towards renewable energy,” Bender-Simon said.

Williams said she believes discussions on whether the Paddle Out on Wednesday as part of the May 23 memorial events series should have been canceled because of the recent spill signify the importance of divesting from the fossil fuel industry.

“The Paddle Out that was earlier [last] week, I think the fact that that beautiful ceremony was threatened by this oil spill also made people really realize, when we’re trying to come together as a community, there is this industry that’s blocking our way,” Williams said.

De Zoysa said she was pleased with the turnout at the protest and hopes to see students continue to get involved in the campaign to divest.

“I was surprised at how many people came out. Not just students, but a lot of influential activists on campus: John Foran and others,” De Zoysa said. “I was really happy and inspired to see people come up and speak their hearts and share information and how we can all get involved. I feel this momentum is building.”

De Zoysa said she has seen an increase in the amount of student participation in environmental organizations on campus since the Refugio oil spill.

“This event would not have had such a turnout if it weren’t for the oil spill,” De Zoisa said. “This is a great opportunity to reel as many people in as possible because they understand … animals are dying and washing up on shore and it’s really sad and it’s our fault. So we have a responsibility to make it right.

First-year sociology major Pierce Abrahamson said he believes UCSB cannot claim to be one of the country’s top environmentally conscious universities when they are part of a system investing in the fossil fuel industry.

“We as a school can say, ‘Oh, we’re environmental, we’re the greenest campus in the United States,’ but it doesn’t really mean much if we keep supporting the industry that is undermining the whole entire environmental movement to begin with,” Abrahamson said.

Williams said any student who values the beach and ocean should think about participating with one of the many environmental groups on campus.