The Daily Nexus
Science & Tech
Supernova Collision May Reveal Its Origin
May 28, 2015 at 6:00 am by Stephanie Pernett 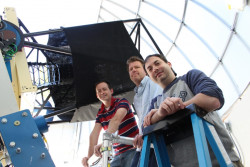 Decades ago, Type Ia Supernovae, or “standard candlelight’s,” as their known, have lent to significant advancements in cosmology, providing scientists with a marker with which to estimate the age and chart the expansion of the universe. However, despite aiding our understanding on the behavior of the cosmos, the origin of type1a supernovae themselves and how they are formed remain obscure.

Recently, Caltech astronomers from the intermediate Palomar Transient Factory (iPTF) and physics associates from UCSB and Las Cumbres Observatory Global Telescope Network have witnessed a supernova crashing into its companion star, a rare phenomenon that sheds light on how these brilliant vestiges of stars are formed.

As a star approaches the end of its life cycle, an exhaust of hydrogen fuel forces the star to begin consuming helium in order to power nuclear fusion, combining this element either to oxygen or carbon. This causes the star’s core to become increasingly dense and inert, the remains of which is known as a white dwarf. In cases where it is left alone, the initial hot and dense remnant will slowly cool down and fade away. However, should the white dwarf find itself in binary system, or a set of orbiting stars, a phenomenon called a Type Ia Supernova may occur. While astronomers know how the progenitors for these explosions are formed, the steps leading to the type Ia Supernovae are not as firmly established.

Iair Arcavi, a postdoctoral fellow in the department of Physics at UCSB, explains the general mechanism for these explosions.

“[If you] add mass to a white dwarf, eventually it will get too heavy to hold itself against its own gravity,” Arcavi said.

Adding more mass to a white dwarf, the pressure increases, eventually igniting the carbon that’s part of the composition of the white dwarf. The question is what is adding mass to the white dwarf?

Two competing models attempt to answer this question. According to the double-degenerate model, a Type 1a supernova occurs when two orbiting white dwarfs spiral into each other due to the mutual attraction of their gravitational forces. The second theory, called the single degenerate theory, stipulates cooperation from a second star. This mass of this companion star, a sun-like star, is slowly wisped away by the gravitational pull of the white dwarf, resulting in a thermonuclear runaway reaction that fuels the explosion. If this theory were correct, the explosion would leave behind a remnant of the larger companion star, leaving behind a detectable ultraviolet signature.

The study, appearing May 21 in the Journal Nature, argues that the observed Supernova type1a event is in agreement with the single degenerate model. LCOGT, employing a global network of robotic satellites, was able to obtain early data and determine this unusual type of supernova, belonging to a class known as SNe Ia. Different than normal Type Ia explosions- in which the white dwarf is obliterated entirely- this subclass is comparatively subluminous and leaves a piece behind, reminiscent of a companion star.

According to Arcavi, the heat signature from the supernova gives indirect information about the remnant star’s size. “Depending on the angle you view the star from, you’ll see the star heating up,” Arcavi said. “Depending on how much it’ll heat up, you can get an idea on how big the companion star was.” This initially was predicted by UC Berkeley astrophysist, Dan Kasen, and is the first time this phenomenon has been observed.

Despite this newly acquired evidence, the data does not dismiss other progenitors for type1a supernovae. In 2011, for example, the Hubble Space Telescope observed the nearest supernova explosion in the last 25 years that left behind no material, consistent with the double-degenerate model. By measuring a more extensive field of subluminous type1a events using a new high-cadence proposed space telescope, the ULTRASAT, the fraction of supernovae conforming to the single-degenerate channel may be determined.