The Daily Nexus
News
Open Forum To Discuss Sexual Assault Policy
May 28, 2015 at 5:00 am by Megan Mineiro 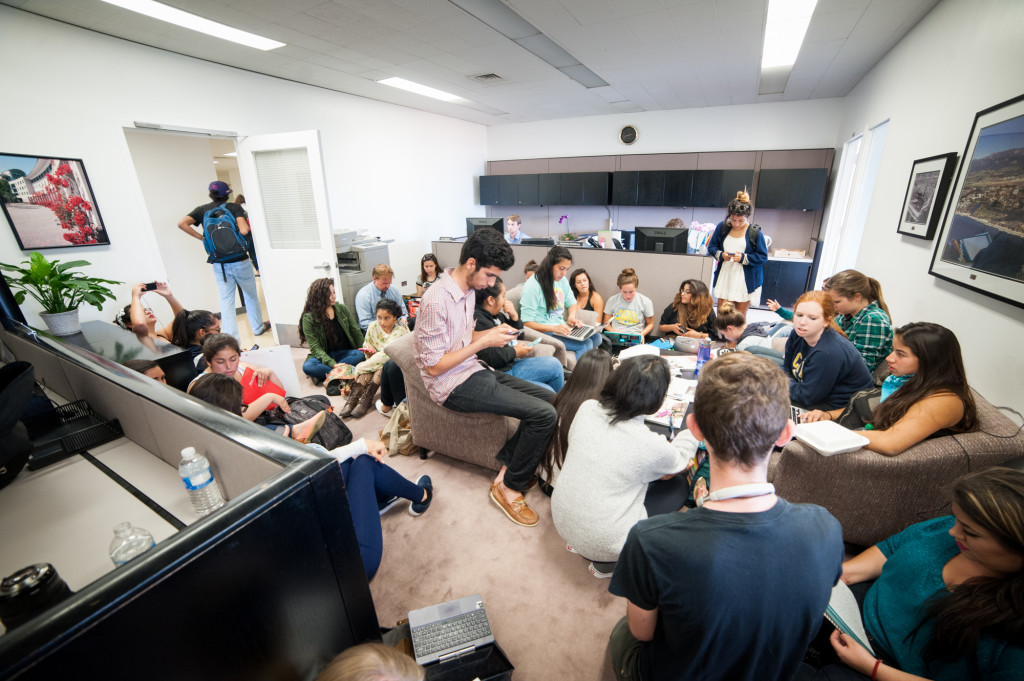 Students and administrators will come together on Friday to discuss demands made by students. Lorenzo Basilio/Daily Nexus

Students and administrators will come together on Friday to discuss demands made by students during the May 13 sit-in.

The “It’s Not On Us, It’s On You” campaign led by survivors of sexual assault Alejandra Melgoza, Lexi Weyrick and Melissa Vasquez will host an open forum discussion between students and university administrators on Friday in the State Street room of the University Center at 10 a.m.

Melgoza, Weyrick and Vasquez led a 13-hour sit-in at Chancellor Henry T. Yang’s office on May 13 to demand specific policies to improve the university’s handling of sexual assault cases. One of the stipulations made in the discussion that concluded the sit-in was an agreement to hold a public forum which Yang would attend. Interim Vice Chancellor of Student Affairs Mary Jacob, Senior Associate Dean of Student Life Debbie Fleming and additional administrators, including members of the Office of Judicial Affairs, have also committed to participate in the forum.

The forum will include clarification of the demands and further discussion of plans to meet the students’ requests. On the event Facebook page, organizers cautioned those who plan to attend that administrators are mandatory reporters, meaning students should not share details of their experiences of sexual violence or sexual assault if they do not wish to “inadvertently begin an investigation.”

Gaucho Consent Co-Chair, Take Back the Night Executive Board member and second-year sociology major Lexi Weyrick said the forum will provide students an opportunity to voice their concerns to administrators on issues related to sexual violence and sexual assault.

“It’s a good setup for students to be able to air their grievances, for administration to see that this isn’t just about the three of us, to make sure that people are aware of the implications of sexual assault and sexual violence on the campus as a whole,” Weyrick said.

Second-year Chican@ studies and history of public policy double major Alejandra Melgoza said the event aims to provide students the opportunity to present their concerns on sexual violence and sexual assault to Yang in person.

Fleming said while Yang is often limited in the amount of time he can speak with students in person about their concerns, other members-of the administration frequently work one-on-one with students.

“The Chancellor has a pretty full calendar, and so it is challenging sometimes for students,” Fleming said. “Certainly, a lot of us at Students Affairs spend a lot of time working with students directly.”

Fleming also said administrators have discussed plans to increase the amount of communication between students and administrators with It’s Not On Us, It’s On You leaders.

“What we probably need is some more regular opportunities to hear from students,” Fleming said. “We’ve talked about establishing more of a permanent group that students can be part of that would meet just on a regular basis, maybe quarterly, with those of us that work in these areas to share.”

First-year global studies major Catt Phan said she spent six hours at the sit-in and plans to attend the forum because she believes it is “crucial” for students to hold the university accountable for the ways they have handled sexual assault in past years.

“It seems like admin and judicial affairs care more about our student fees instead of our sanity and bodies,” Phan said in an email. “It’s up to us to have productive dialogue because if change doesn’t happen now, it’s not going to happen later.”

Phan said she believes sexual violence may be the biggest issue on campus and in Isla Vista and the university needs to better educate students on the importance of consent.

“With the reputation of a ‘party school,’ there is a higher risk of sexual assault and unfortunately not enough people are educated about the sexual violence issues,” Phan said in an email. “We need to educate people and de-stigmatize sexual assault … the idea of consent needs to be further emphasized and survivors need to feel safe enough to come forth with their stories.”

Associated Students External Vice President of Local Affairs office fellow and first year psychology major Alissa Gomez said she hopes to see a large number of students at the event because she believes sexual violence and sexual assault are issues affecting students both on campus and on a national level.

“I’m hoping that people will feel free to voice their opinions as needed and that they’ll get to say what they feel is needed to their administrators,” Gomez said. “We have the ability as college students to make this change not only on our campus, but on campuses across the nation.”

Weyrick said while she is uncertain how many students will turn out to participate in the discussion, the campaign as a whole has received positive feedback.

Last Thursday, Melgoza, Vasquez and Weyrick planned to speak in public forum at the UC Board of Regents meeting to present their demands to UC President Janet Napolitano and Governor Jerry Brown, but were unable to attend due to flight cancelations and delays, according to Weyrick.

“We got to the airport in plenty of time to catch our flight, but it was overbooked and so they wouldn’t let us on the plane even though we had reserved seats,” Weyrick said. “So that started just a snowball effect — we couldn’t get on the standby for the second, our third flight got cancelled, the fourth flight was delayed an hour.”

Weyrick said although she, Melgoza and Vasquez were unable to attend the meeting, they still plan to make their demands known at a system-wide level.

“We were unable to attend the Regents meeting, but we do still have a meeting with [UC Senior Vice President and Chief Compliance and Audit Officer] Sheryl Vacca in the works, so we’re still meeting with her, regardless,” Weyrick said. “We have a guarantee of a meeting, we are just scheduling it now. It will definitely be in the next couple of weeks.”

A version of this story appeared on page 1 of the Thursday, May 28, 2015 print issue of the Daily Nexus.