The Daily Nexus
Sports
Gauchos Lose Three, Gain Six With Latest Additions
May 28, 2015 at 5:00 am by Martin Cobos 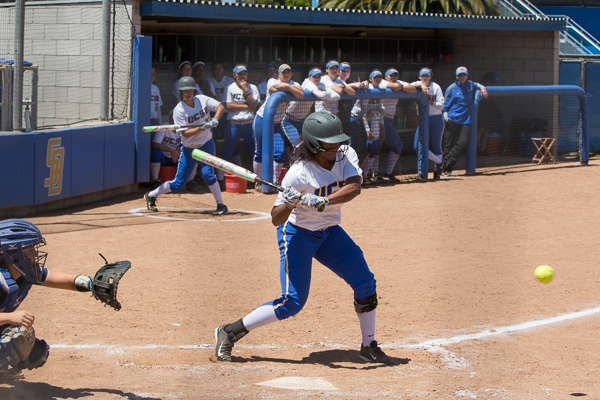 The Gauchos finished this past season with an overall record of 19-35 and a conference record of 6-15. The disappointing season landed the team with a seventh place finish in the Big West.

“We’ve been recruiting most of this class since their first years of high school,” Head Coach Brie Galicinao said. “We are excited that they’ll be here next year to make an immediate impact.”

With only three graduating seniors, the team should have a host of new talent to choose from in the upcoming season. Perhaps, the biggest impact will be the Gauchos’ addition of three new pitchers.

Pitching was a major weak spot for the Gauchos last season. After an injury derailed the career of star pitcher Shelby Wisdom, the staff simply didn’t have the firepower to compete. The team finished with a combined ERA of 5.45 and gave up 42 home runs over the course of the season.

Leading the new freshman pitching class is Veronika Gulvin. Gulvin is ranked 75th in the state, and during her senior season at Dos Pueblos High School she sported a 0.57 ERA with 10 shutouts in 16 games started. She also proved to be dangerous at the plate, hitting .390 for 18 RBIs and three home runs.

The other two incoming pitchers are Claudia Puente and Ashley Wright. Puente is ranked 103rd in the state and helped her team to a 22-10 overall record with a 9-1 league mark in her senior season at Bullard High School.

Wright pitched for the So-Cal Breakers club softball team and played four years of varsity softball at Mission Hills High School. In 2014, Wright was named Varsity Softball 1st Team All-League and was the team MVP for her high school.

Rounding out the incoming class are three infielders with a slew of offensive talent. Infielder Sierra Altmeyer is ranked 25th in the state and 52nd nationally. In her senior season at Patrick Henry High School, she hit at a .415 batting average earning seven home runs and an impressive 43 RBIs.

Infielder Whitney Pemberton is ranked 67th in the state and 165th nationally. During her senior season at Warren High School, she hit an incredible .528 for 31 RBIs and six home runs. She also scored 26 runs and had a .916 slugging percentage.

Infielder Melanie Menor will be the final incoming recruit. Menor attended Gregori High School and is ranked 151st in the state. During her senior season, she averaged a .341 hitting percentage for 18 RBIs and 21 runs scored.

“This group will give us more depth and options offensively and defensively,” Galicinao said. “Especially since we are adding three more arms to our bullpen.”

With a batting order that remains one of the best in the conference and a strengthened bullpen, the Gauchos could be top contenders to capture the Big West title next season.

A version of this article appeared on page 10 of May 28, 2015’s print edition of the Daily Nexus.