The Daily Nexus
News
State of Emergency Allows Joint Cleanup Effort
May 22, 2015 at 1:39 am by Juliet Bachtel and Beth Lebens 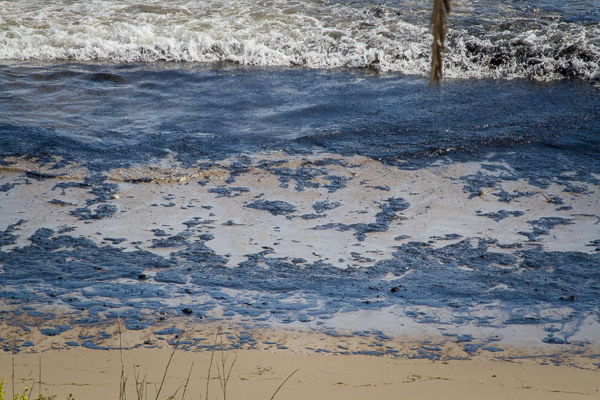 The City of Goleta, County of Santa Barbara and the State of California each declared a state of emergency Wednesday regarding the Refugio Beach oil spill, allowing local, state and federal entities to contribute resources to a joint cleanup effort called Unified Command.

The spill began with a pipe rupture on May 19 and has released an estimated 105,000 gallons of crude oil, approximately 21,000 of which may have reached the ocean. Approximately 6,090 gallons have been collected by vacuum trucks, skimmer boats and other equipment. The oil leaked from Plains All American Pipeline’s Line 901, a transport line that carries crude oil to refineries throughout Southern California, just west of Refugio State Beach. The cause remains undetermined.

According to a release by Unified Command, vapor from the spill does not represent an immediate health risk to humans despite the strong odor of petroleum in the area surrounding the beach, with air quality levels continuously monitored. Plains All American Pipeline shut down the line at 11:30 in the morning on the 19th but an exact time for the beginning of the rupture has not been determined. The pipeline was last inspected in 2012 according to United Command, industry standards require internal examination of the line every five years.

The Unified Command includes Plains All American Pipeline, the U.S. Coast Guard, the U.S. Environmental Protection Agency, the California Department of Fish and Wildlife, the Office of Spill Prevention and Response and other local, state and federal agencies.

According to a press release from Santa Barbara County, the proclamation of a State of Emergency allows the County director of emergency services to request resources from other County departments.

According to U.S. Coast Guard Incident Commander and Federal On-Scene Coordinator for response efforts Capt. Jennifer Williams, hundreds of responders have worked non-stop since the spill.

“We’re continuing to deploy the best assets available and working with our emergency response partners at the federal, state and local levels to improve conditions throughout the region,” Williams said. “Our main goal is to ensure public safety.”

Williams said she does not anticipate the oil reaching UCSB and I.V. shores.

“Right now we don’t expect it to land in the Santa Barbara area of the college beaches,” Williams said.

“If we can’t do enough, then certainly we need to be putting pressure on our state and federal representatives and those agencies to do so,” Farr said.

U.S. Environmental Protection Agency (EPA) Federal On-Scene Coordinator Michelle Rogow said EPA and other federal entities are working alongside Plains All American Pipeline to investigate the cause of the leak.

“We are coordinating with the Department of Transportation, Pipeline, and safety and administration with regards to their investigation and their work in getting into the pipeline area and addressing the leak source,” Rogow said.

California Department of Fish and Wildlife Office of Spill Prevention Response Capt. Mark Crossland said trained volunteers from the Oil Volunteer Network are assisting with wildlife capture, recovery, and rehabilitation in conjunction with other federal departments.

“We remain committed to working with Unified Command,” Crossland said. “The state continues to provide personnel and wildlife expertise to the cleanup effort.”

“The general public may want to help, but the fact is that trying to capture oiled animals without the training is dangerous both to the animal and the people,” Ziccardi said.

Plains All American Pipeline Senior Director Rick McMichael said the company has a plan to continue investigating the cause of the leak, but the process is still awaiting approval.

“Once the plan is approved, we will excavate the pipe, remove it, and send it on for examination under the guidance under the pipeline and safety administration,” McMichael said.

Farr said although Plains All American Pipeline is part of the Unified Command, it should have done more beforehand to prevent the spill.

“It’s very concerning to me that the oil company really had no knowledge that this much oil was leaking from the pipe,” Farr said. “It was not the pipeline company but our office of emergency services that happened to be out in that area that discovered it and reported it to the oil company.”

“Those lines, any inspections, take many months to go through that data and get that information back,” Hodgins said. “That’s all conducted by a third party.”
According to Hodgins, the Unified Command has not yet reached the pipe, and it could be “months” before the cause of the leak is determined.

“It’s a long process. Forensics has to be done outside,” Hodgins said. “It has to be witnessed by the federal officers as well as third party folks. They will take that piece of pipe and have it inspected by a third party … we have not even uncovered the pipe yet.”

According to a press release from the office of California Gov. Jerry Brown, the governor said declaring a state of emergency will allow government entities at different levels to work quickly to clean the leaked oil from the SB County coastline.

“This emergency proclamation cuts red tape and helps the state quickly mobilize all available resources,” Brown said in the statement. “We will do everything necessary to protect California’s coastline.

According to a press release from the Santa Barbara County Public Health Department, there have been no reports of individuals needing medical attention due to air toxicity from the leaked oil, but county residents are encouraged to avoid contact with areas near the spill.

Refugio State Beach and El Capitan State Beach remain closed as hazmat areas, and the Center for Toxicology and Environmental Health will continue to perform tests of the area during and after the cleanup process until it is declared safe.