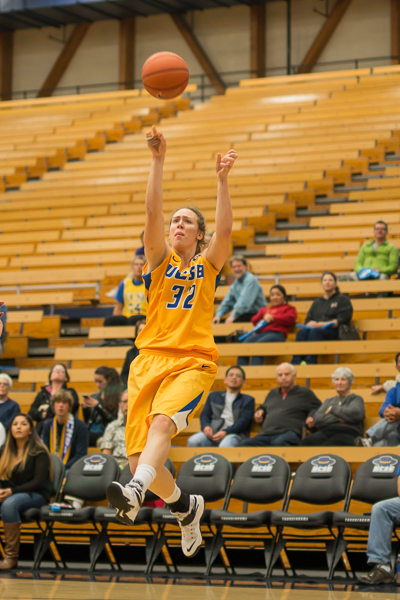 “The players have worked hard in workouts and have been welcoming as far as relationship building, and all of us have appreciated that,” Henrickson said. “Really excited about [the new staff] as well, the people that we’ve been able to bring here, their skill set and their energy.”

Henrickson was announced as the team’s new head coach less than a month ago, replacing Carlene Mitchell after a four-year stint in which the Gauchos went 43-82 overall. After winning the Big West Championship back in 2011 and earning a spot in the NCAA Tournament in Mitchell’s first season with UCSB, the Gauchos’ record worsened each year. They most recently finished in last place in the conference with a mark of 2-27 overall, leading to the change which brought Henrickson to the team.

“The last thing I want them doing is thinking about December and January and February,” Henrickson said. “I think right now they need to focus on being better on the 21st of May than they were yesterday. As soon as you start looking ahead it can be overwhelming. We’ve just got to saw the wood, grind it out every day and try to get a little better.”

Aiding Henrickson in bringing UCSB back to the top of the Big West will be the team’s only two additions on the court for next year in Miller and Jones.

Standing at 5’10”, Coco Miller will be a player that UCSB can look to offensively to help improve the team’s poor shooting percentages from last year. In her junior year at JSerra Catholic, Miller averaged a double-double with 23 points and 10 rebounds per game, resulting in her being named First Team All-State and First Team All-CIF. By the end of just her junior year, she had already become the school’s all-time leading scorer with 1871 points.

“There’s a need for us to be able to shoot the ball better from three,” Henrickson said. “That’s exactly what she does. The kid can shoot it. Tough kid, high basketball IQ and good energy.”

Helping to fill the void left by graduated senior Clair Watkins on the inside will be Kali Jones. The 6’1” power forward is a versatile weapon in the paint who averaged 16.5 points, 9.5 rebounds and nearly three blocks per game in her junior year at Chaparral High. Jones transferred to Vista Murrieta High for her senior year with the hopes of improving her game further against a higher level of competition.

“She’s played some really talented kids, that’s what she was looking for. I admire those reasons that she wanted to play there,” Henrickson said. “She’s long, she’s got some size, which we need. She’s a really driven, motivated kid.”

Every player on the team this past season, excluding graduated seniors Clair Watkins and Kristine Brance, is set to return to the roster in the fall. With new leadership and a fresh start, UCSB will be taking a step-by-step approach as it looks to improve heading into the 2015 season.

“When you just talk about winning, there’s a lot of things you’re not having conversations about. It’s all about a process. The win is the result,” Henrickson said. “If you’re result-focused, you’re probably going to screw up the process. We will coach these young ladies up and help them get better every day.”
The Gauchos will play their first game under Henrickson in early November.

A version of this article appeared on page 11 of May 21, 2015’s print edition of the Daily Nexus.