The Daily Nexus
Spoken Word and Poetry
‘Bloody Poetry:’ Punk, Poetry and Eccentricity
May 21, 2015 at 3:35 pm by Alex Wehrung and Jason Chun 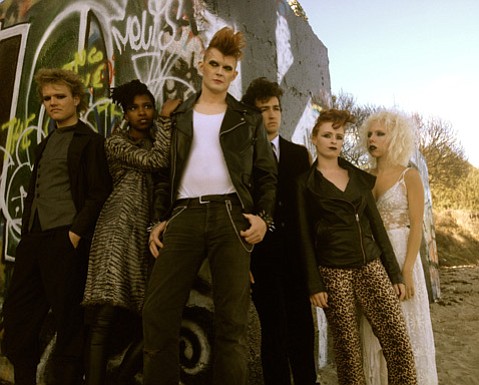 Not exactly the headline you were expecting, was it?  And we weren’t either; “Blood Poetry” takes an unexpected angle and turns its characters into anachronisms: Percy and Mary Shelley, Lord George Byron and Claire Clairmont are all dressed as late 70s English punks — mohawks, eyeshadow and all. This aesthetic doesn’t do anything for the plot, but it is an insightful reflection on how these people were the rock stars of their time: The Romantics were as innovative and free-loving as much as they were tortured.

From the first minute, “Bloody Poetry” announced its intent to shock. The play opened in darkness, until a crimson light revealed a tousle-haired Percy Shelley (Dillon Francis) suffering violent spasms. A thumping drumbeat soon gave way to hard punk rock as Shelley leapt up and was joined by the other characters in a wild dance. Things only got weirder when the characters started speaking; it was a jarring contrast between sight and sound to hear the elaborate Romantic prose uttered from the mouths of angst-ridden young punks.

Ignoring the leather jackets and black fingernails, the play narrated the drama of three of England’s most famous writers. Percy Shelley, typically addressed by his middle name, Bysshe, his wife Mary (Quinlan Fitzgerald) and their friend, Claire Clairmont (Chelsea Williams), meet and spend the summer with the maniacal Lord Byron (Ian Elliott). Byron arrives accompanied by Dr. William Polidori (Zach Macias), who both narrates and (somewhat reluctantly) participates in the other characters’ misadventures. Before the summer’s end, Bysshe has suffered a seizure (again), Mary has started writing Frankenstein and Claire is pregnant with Byron’s child.

Arguably, the highlight of the show was Lord Byron, whose mohawk was a story in itself. No other hairstyle could so perfectly match such a volatile personality: The untamable Byron would swear at the top of his lungs one moment and whisper solemnly the next. Even when he didn’t have a bottle of brandy at hand, Byron seemed out of control. In portraying the poet, Ian Elliott seemed possessed by purely manic energy.

One cannot go without mentioning the striking figure of Harriet Westbrook (Marley Frank), the ghost of Bysshe’s first wife, who drowned herself in a lake. The glowing, pale figure set a distinctly darker tone as she opened the second act with a monologue, lamenting her sorry state and cursing Bysshe. Weaving in and out of the action, sometimes inches from the audience, she was a truly haunting (heh) presence, embodying Bysshe’s agony and regret.

Unfortunately, during the May 9 performance, a part of the background collapsed mid-transition and the music cut out as if to emphasize this possible disaster. Taking immediate action, director Jeff Mills shot out of his seat and announced that the play would have an early intermission, which allowed for the stage-hands to repair the broken façade and for the audience to get over their surprise. The play then resumed without any further drama (ba-dum tiss).

It’s easy to think about the strangeness of mixing Romantic poets and punk-rockers, but hard to convey how the clash felt appropriate, even natural. Though separated by 160 years, these two generations of young geniuses share similar sympathy for an oppressed society. When Percy Bysshe Shelley calls on the masses to “Shake your chains to Earth like dew … Ye are many — they are few!” he invites a revolution; it is bold commentary even by today’s standards. “Bloody Poetry” goes to show that great art transcends time and expectations.