The Daily Nexus
Tennis
Big West Champs Restock With New Talent
May 21, 2015 at 5:01 am by Daniel Moebus-Bowles 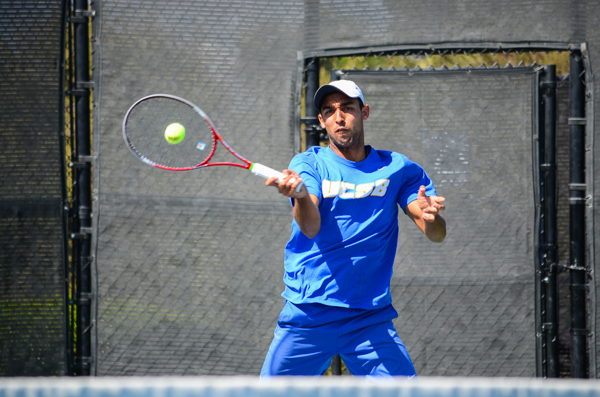 After a very successful season that ended in a Big West Tournament Championship and a run to the NCAA Tournament, the UCSB men’s tennis team is set to usher in four new Gauchos to the team next fall.

“This may be the best recruiting class that we have ever had,” Head Coach Marty Davis said. “They can really help us with our goal of going further into the NCAA Tournament.”

One freshman that will make his way to Santa Barbara next year is Anders Holm, an international player from Denmark. With the vast experience that this young player has, he will surely be fighting his way into the starting lineup next year.

In his junior career, Holm was well decorated and consistently stood towards the top of the rankings. In Denmark, he reached the finals in singles play three times and took home a title in the U16 Division. On the doubles platform, Holm has taken home an outstanding three Danish National titles. Recently, Holm has been competing on tour at the professional level and has even reached ATP rankings in both singles and doubles play at this time.

“[Holm] will be the oldest and most mature player that we have coming in,” Davis said. “He has great experience, and we look forward to him jumping on our team so we can help him improve here.”

Along with Holm, UCSB will add three American recruits as well in Oliver Sec, Nicolas Moreno de Alboran and Riley Scott.
Sec hails from New York and, in the state, he ranks as high as fourth, while coming in 54th nationally. His record of 38-23 in ITF singles play is enough to dub him a five-star recruit according to tennisrecruiting.net.

Moreno de Alboran is another native New Yorker that will join Sec in the fall, sitting just above him in the rankings. The two, in fact, met on the courts just this past month in a head-to-head competition in which Moreno de Alboran took the victory in straight sets 6-0, 6-2.

Moreno de Alboran currently is listed as high as second in their state of New York and holds down the 26th spot nationally. He holds an ITF singles record of 21-10, going undefeated against all four-star and five-star recruits that he has faced.

“Nicholas is one of the best American recruits out there,” Davis said. “He’s around 140th in the world, and he has great potential.”

Scott is the fourth and final recruit of the 2015 team. Scott will be playing closer to home than his freshman teammates as he comes from Salinas, California. In this state, he is ranked 20th and he sits at 99th in the nation. He boasts a 22-9 record in ITF singles and is most recently coming off of a singles tournament victory in mid March, where he lost just one set in four rounds.

“I think this recruiting class can help our teams overall goal of reaching the Sweet 16 in the NCAA tournament,” Davis said. “We are definitely making a huge improvement.”

The Gauchos will return to the courts this summer when tournament play starts.

A version of this article appeared on page 11 of May 21, 2015’s print edition of the Daily Nexus.