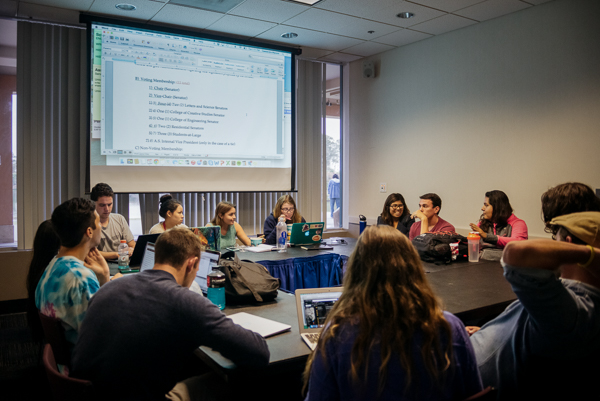 The Associated Students Senate Joint Committee on University Affairs and Constitution and By-Laws (CBL) met for the last time this quarter on Tuesday in the UCen’s Goleta Valley Room to discuss five Senate bills.

The joint committee voted to move three of the five bills to the consent calendar, designating them to eventually come to a vote in Senate. The other two bills moved to old business will not appear on the Senate floor until next school year.

The bill changes the current protocol which allows committees to elect chairs and vice chairs.

If the bill passes, A.S. Director of Alumni Affairs and A.S. Chief Financial Officer will assist in the stewardship of the A.S. Innovation Fund, and future expenditures from the fund will be recommended by the A.S. President in consultation with the Donor Oversight Committee, then approved by a two-thirds vote in Senate. The bill also establishes protocol for A.S. members to donate portions of honoraria gained through A.S. positions.

A Bill to Establish Mandatory Training on Understanding Unconscious Bias and the Roots of Anti-Semitism for Associated Students Senators and Executives, written by off-campus senator and third-year political science and psychology double major Michelle Moreh, would require the A.S. Internal Vice President to coordinate a training for all A.S. senators with the Anti-Defamation League by the sixth week of fall quarter.

The bill builds on the A.S. Resolution to Condemn Anti-Semitism.

If the bill passes, funding not rolled over to campus organizations accounts for the next fiscal year will move to the A.S. Finance and Business Committee, and distributed to any Office of Student Life (OSL) or A.S. entity “requesting funds for a project or program relevant to the specified language of the lock in.”

The bill also establishes exceptions to this code, allowing Educational Opportunity Program, KCSB, A.S. Program Board, Communications Personnel, A.S. Recycling, I.V. Improvements, I.V. Tenants Union, the Coastal Fund and the Community Affairs Board automatic rollovers of funds not spent by the end of a fiscal year.

College of Creative Studies (CCS) Collegiate Senator and second-year CCS physics major Liam Stanton said he was “not a yes” on the bill because he thought unused funds should remain at the discretion of Senate to supplement the A.S. budget.

“If you don’t appropriate it to OSL from the accounts and just leave it in the general fund, it can be used for whatever and whoever,” Stanton said. “We have to trim money every year off the budget, and if we didn’t allow so many rollovers and we allowed it to roll over into the discretionary funds, I guess we wouldn’t have to trim because the scale at which we trim is way less than the amount of money that is rolled over each year.”

But College of Letters and Science collegiate senator and fourth-year economics major Nikka Kurland said the bill could ensure students “get what they paid for” with lock-in fees.

“We’re not like any other business where you need to save money,” Kurland said. “It’s encouraged that a lock-in spends all the money they have within that year, because those students paid for those things for that one year.”

The joint committee voted to move the bill to old business.

Mancini said the bill should pass to create a larger committee, which could ensure quorum more often and foster discussion on the A.S. Legal Code.

“I feel like the fact that we are still having joint University Affairs and CBL meetings is indicative of why the bill should pass,” Mancini said. “You do need to have a large group of people to have good discussion on things.”

The joint committee voted to move the bill to old business.