The Daily Nexus
Volleyball
Women’s Volleyball Adds Five New Players
May 19, 2015 at 5:00 am by Sarah Stigers 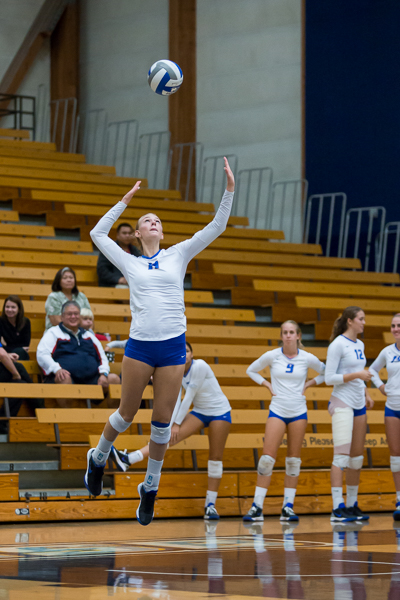 Each new season means saying goodbye to familiar Gaucho athletes while hoping that new blood will be able to replace them.

The same holds true for the UCSB women’s volleyball team who will lose a starting setter in Ali Santi come June. In her senior season, Santi recorded 501 assists and averaged 5.27 assists per set. She also recorded 197 total digs.

“We’re excited about the five players we are spelled bringing in,” Head Coach Nicole Lantagne Welch said. “We think we have a lot of great talent coming in from different but all strong experiences.”

“The recruiting process is ever-changing and always happening. Basically, for volleyball it is getting earlier and earlier,” Lantagne Welch said. “Lindsey was the first one to commit to us the summer before her junior year, and Annie committed later that summer.”

Coming in as a setter for the Gauchos, Hasselmann has already racked an impressive incoming résumé playing for La Jolla Country Day School out of San Diego. In her time on the court, Hasselmann has recorded 3,142 assists and has swung for a 4.26 hitting percentage while recording 1.3 kills per set.

Joos and Ruddins will be added to an already well-recognized outside hitting staff, which includes All-Big West outside hitter Chanel Hoffman returning for her sophomore season next year. Joos has recorded a single-game high of 39 kills in her high school career and dominated the court in the 2013 CIF Championship match.

“Ruddins is a very good outside hitter — a terminator type of player. She has a definite opportunity to make a big impact,” Lantagne Welch said. “Joos is also an outside hitter who came from a really strong club team and has some back-row skills.”

Ruddins has also had pre-college success as an outside hitter in her time at Aliso Niguel High School. In her senior season alone, she recorded 474 kills and swung for a .473 kill percentage.

Last year, usual outside hitter Ali Spindt transitioned into a defensive libero with much success as she placed high on conference leaderboards throughout her sophomore season. However, finding a defensive specialist in Rottman from Santa Barbara High School helps add depth to the position.

“People are making their decisions earlier and so you have to look for talent in younger players and project that more, and fill in your own blanks on how that will develop in the following years,” Lantagne Welch said.

With this season, the women’s volleyball program will add the first international player in 15 years to its roster. Petrachi will travel to Santa Barbara from Italy, where she played in a budding club that had early success — a club that mirrored Petrachi’s own accolades as she was named the best libero in her region in 2014.

“Emilia has great international experience as a libero, and that should really help the depth of our back row situation on the court,” Lantagne Welch said.

With these new additions, the Gauchos will hope to improve on their 13-14 overall record from the 2014 season this upcoming year.