The Daily Nexus
News
Vigil Honors Lives Lost to Suicide
May 14, 2015 at 5:00 am by Supriya Yelimeli 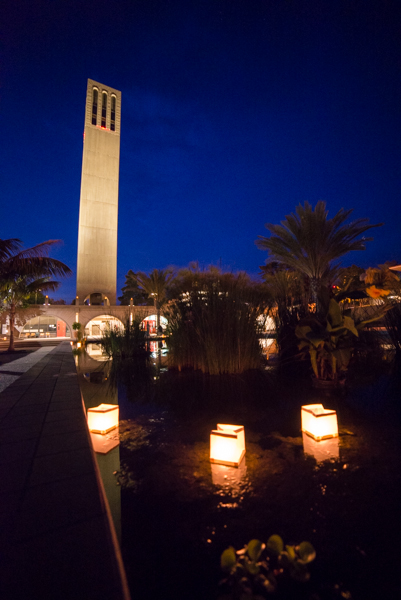 UCSB Counseling and Psychological Services (C.A.P.S.) hosted a candlelight vigil in Storke Plaza Wednesday evening to provide a space for students, staff and residents of Isla Vista to honor lives lost to suicide.

C.A.P.S. members placed over fifty white paper bags containing tea lights along the steps leading into Storke Plaza for the vigil, upon which volunteers and attendees wrote words of remembrance. Students and I.V. community members paid their respects at the event and released floating lanterns into the Storke Plaza pond.

C.A.P.S. psychology intern Shannon Hackett said she was inspired to host the event by students at UC Irvine who held a similar candlelight vigil to honor victims of suicide. According to Hackett, students need spaces to discuss their losses and to share tragedy preventative measures.

“I think that this is something that really just meets a need at UCSB,” Hackett said. “We lose students pretty much every year either to accidental death or to suicide and it’s a way to just give people a space to honor people.”

Hackett also said she hopes the vigil was a place for survivors to “leave feelings behind” and participate in healing interactions.

“A lot of the times we’re talking more about prevention or intervention and there’s not a lot of time to talk about those that we have lost,” Hackett said.

Fourth-year psychology major and C.A.P.S. student health peer Melina Mossberg said the candlelight vigil was meant to welcome a variety of students, not just those who have lost someone to suicide. Mossberg also said she hopes to continue hosting events that will adapt to meet the needs of the UCSB community in the future.

“This is the first time and we’re trying it out and, hopefully, this will be something that we’ll continue doing in the future,” Mossberg said. “People will always have this space and they’ll have an opportunity to come and even just be allies if they haven’t lost somebody.”

I think it’s important for survivors, for the people who are here, to be able to honor the person that they’ve lost and also to just raise awareness about suicide, just so they know people care. – C.A.P.S. Director Jeanne Stanford

C.A.P.S. Director Jeanne Stanford said C.A.P.S. hopes to host similar events during Suicide Prevention Month in the fall to continue providing an outlet for people to support each other and share their experiences.

“I think it’s important for survivors, for the people who are here, to be able to honor the person that they’ve lost and also to just raise awareness about suicide, just so they know people care,” Stanford said.

Third-year global studies and psychology double major Nelson Moreno said the vigil was another step towards the removal of the stigma surrounding mental health issues, and served to bring students together, especially given the May 11 Sabado Tarde incident.

“It’s been done in other UCs and I think having it here in Santa Barbara will promote an understanding and compassion toward people that have completed suicide,” Moreno said. “I think this month can be very triggering to students especially with the tragedy.”

“It helps students understand and gives them a safe space to talk,” Ong said. “I feel like suicide is not talked about a lot; it’s really sensitive and … this gives a safe and healing space for students who have maybe experienced any of that in their life.”

A version of this story appeared on page 3 of the Thursday, May 14, 2015 print edition of the Daily Nexus.