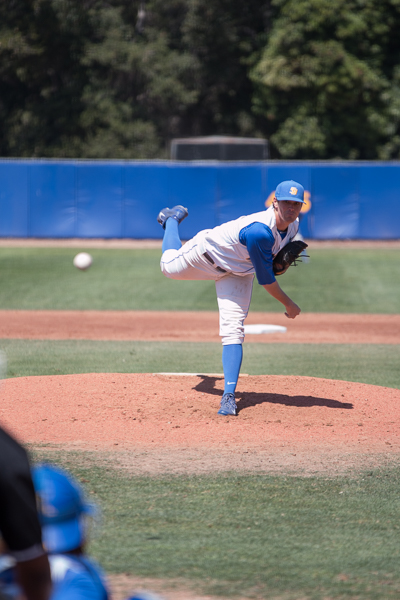 Some people say you cannot help being romantic about baseball. It’s a part of a greater American tradition, it fills memories from our childhood and can hold a community together. Baseball is the great equalizer, and the game is a part of many sports fans’ lives.

But for some, the game is not just a part, but a large part of life. Like those on the UCSB baseball team, players spend hours training, practicing and playing their entire lives to reach high school, college, minors, then pro ball.

Gaucho sophomore right-handed pitcher Shane Bieber is among these players. Bieber, the usual Sunday starter for the Gauchos squad, started playing baseball as a young boy, encouraged by his father. Bieber grew up as an Angels fan.

While he played basketball and football along with baseball in his youth and through high school, a sophomore year wrist injury he encountered while playing football was the turning point in his full focus on baseball at Laguna Hills High School.

“Football was always a secondary sport for me,” Bieber said. “When I broke my wrist and had to get surgery, I realized that once I rehabbed and got back to 100 percent health, it was time to focus on baseball, looking toward the future.”

In his first year playing for UCSB, Bieber started 11 times over the course of the season, earning a 3.76 earned run average with a 3-4 record.  His first win in Gaucho blue came in his second appearance after seven shutout innings against Princeton.

“I’ve always enjoyed pitching the most because you are able to control the game one pitch at a time,” Bieber said. “It feels like you have the biggest impact on the games that you pitched.”

This year, UCSB pitching staff’s success is a testament to its starters and the hard work they put in weekly to become ranked No. 3 for lowest collective ERA among all pitching staffs in the NCAA.

This season, Bieber has thrown 95 innings in his 13 appearances and currently holds a 7-2 record. Bieber is throwing for a 2.08 ERA in the season and 1.80 in conference.

“When people ask me what I was thinking during some of my better outings, I have a hard time coming up with an answer, because I guess when you’re in the zone, you don’t think that much,” Bieber said. “If I don’t remember what I was thinking, it was a good day. I just try to trust my stuff and throw to [senior catcher Campbell Wear] and let the guys get themselves out.”

Bieber currently falls in the top 10 of multiple conference leaderboards. His seven wins put him tied for fourth in overall wins this season with two other Gaucho starters. His 2.08 season ERA is sixth-best in the conference and his 79 strikeouts tie him at fourth-most strikeouts in the conference with UCSB’s junior lefty Justin Jacome.

“This year is awesome. The guys are great, the camaraderie is high and the morale is pretty high, too,” Bieber said. “As far as the success goes, we have so much talent and I think we can go a long way.”

With still another year left on the Gauchos, Bieber will be returning for another chance to play with a team just as successful as this year’s team.

“I’m not sure what’s next. I’d like to go pro, but it’s difficult, like everyone knows. I’m just trying to take it one step at a time,” Bieber said. “After this year, I’ll be playing summer ball in Cape Cod, Massachusetts. But I’m looking forward to next year and working on Gaucho baseball.”

A version of this article appeared on page 10 of May 14, 2015’s print edition of the Daily Nexus.