The Daily Nexus
Sports
Men’s Soccer Bolsters Roster With 11 New Recruits
May 14, 2015 at 5:04 am by Michael Jorgenson 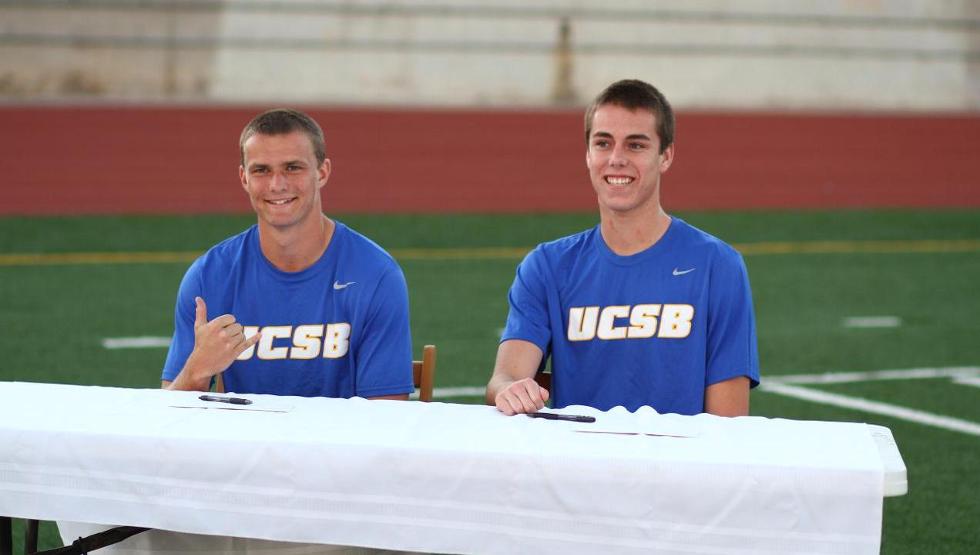 Sam Strong (left) and goalkeeper Justin Vom Steeg (right) have given early contributions, having already joined the team in the offseason. Photo courtesy of UCSB Athletics

With 11 incoming players set to make their mark on Harder Stadium and “soccer heaven,” the UCSB men’s soccer team will be reloaded heading into next season as it looks to keep its place atop the Big West standings.

“We’ve accomplished what we wanted to in terms of the quantity and quality of the recruiting class,” Head Coach Tim Vom Steeg said. “Now we just have to hope that we get each of the players here to UCSB.”

This past year, the Gauchos finished with a 10-7-3 overall, 6-2-2 conference record to claim the conference’s No. 1 seed before being defeated by UC Irvine in the Big West Tournament Semifinals.

A recruiting class which includes six freshmen earned UCSB a Top 5 ranking from Top Drawer Soccer, giving it the highest ranking of any program in the conference. The Gauchos also added five transfers, helping to bolster their depth heading into their 2015 campaign which begins in August.

“We feel good about the class.  It’s a highly rated class,” Vom Steeg said. “Unfortunately, we just don’t always know if a player is really coming until they actually show up on the first day of practice.”

Of the six freshmen, Vom Steeg has already named several players who are expected to make an instant impact on the pitch, including his son, goalkeeper Justin Vom Steeg, forward Geoffrey Acheampong and defender Sam Strong.

The younger Vom Steeg out of San Marcos High School has gotten a head start on the college game, having already enrolled at UCSB for the spring quarter and participating in the team’s offseason. While playing for his club, Real So Cal, Vom Steeg has already built an impressive résumé heading into his freshman year.

The Santa Barbara native has played for the U.S. Men’s National Team since the U-14 level, most recently protecting the net at the U-18 level in a 5-1 win over Urawa back in February. Vom Steeg has earned recognition not only locally, but nationally, being ranked a four-star recruit, the No. 2 goalkeeping prospect in the nation and the No. 23 player overall by Top Drawer Soccer.

Joining the goalkeeper with an early start at UCSB is his former teammate at both San Marcos High School and Real So Cal in defender Sam Strong. Another recent call-up to the USMNT U-23 squad, Strong was named a three-star recruit by Top Drawer Soccer.

A multi-talented defender, Strong has shown an ability to play any position in the back four and is a proven weapon on the offensive side as well. He put in a total of six goals for his U-18 club team in his final season, good for second-best on a team that made the playoffs.

“Any time you have a freshman that you think is going to start for you, then that’s going to be a pretty good freshman,” Vom Steeg said. “[Sam and Justin] are quality players that you expect to help the program and contribute right away.”

On the offensive side, Geoffrey Acheampong will be a creator to watch for coming down the wing. Vom Steeg has already named the left-footed forward out of Cate School in Carpinteria a likely starter for the upcoming season, thanks in part to his play for Santa Barbara Soccer Club. As SBSC’s captain, Acheampong helped lead his team to a US Youth Soccer Cup Championship. College Soccer news has ranked him as high as No. 23 nationally in his class.

Onto the transfers, sophomore Ahinga Selemani is another member of the USMNT  at the U-20 level that should provide an instant punch for the Gauchos on the offensive side. The 5’8”, 170-pound forward was named the “most high-profile transfer” of the offseason by Top Drawer Soccer, coming off a strong freshman season for Michigan that earned him a spot on the Big Ten All-Conference Freshman Team.

“What we’re looking for in transfers is their experience and their ability to contribute right away,” Vom Steeg said. “The transfer players who we’ve got committed are players who we feel could step in from both a maturity standpoint and a physical standpoint and not take nine or 10 games to get up to speed at the Division I level.”

Sophomore midfielder and forward Kevin Feucht, originally from Germany, will be making the move over from the University of Charleston where he was a key player in the Golden Eagles’ run to the Division II National Championship Game. The German-born Feucht put in seven goals to go along with three assists in his freshman season.

The final three additions to the team include sophomore defender Adedapo Adeniyi out of the University of Mobile, midfielder Seo-In Kim from Duke and redshirt sophomore Kevin Armstrong from New Mexico.

A notable departure from the team that will leave big shoes to fill at right back is graduated senior Kevin Garcia-Lopez.

Also leaving the team is sophomore forward Ludwig Ahl, a key offensive contributor last season who notched four goals and four assists to give him 12 total points, good for second on the team.

Despite finishing in first place, the Gauchos’ 2014 season was one that was plagued by injuries. UCSB will hope that its improved depth will allow it to make it through the 2015 season with as few bumps in the road as possible.

The Gauchos will begin their next season against national powerhouse Stanford in August.

A version of this article appeared on page 9 of May 14, 2015’s print edition of the Daily Nexus.

I want to be a part of this someday, as a hopeful College soccer player. Very interested in a school like UCSB. Plus, my cousin Ahinga Selemani goes here so…. #gogauchos