The Daily Nexus
Opinion
Life, Liberty and the Pursuit of Internet
May 14, 2015 at 5:00 am by Matthew Meyer 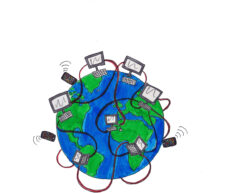 Amidst the tear gas and riot gear of 2010’s Arab uprisings, oppressive regimes resisted outraged citizens by any means necessary. Demonstrators from the revolting nations suffered a myriad of human rights violations, with reports of police brutality, sexual violence and torture pouring in from all corners of the rupturing regions.

In late 2011, a report by the United Nations added an unconventional violation to the growing list of accusations. Special Rapporteur Frank La Rue submitted a document to the UN Human Rights Council condemning any state that restricted citizens from accessing the Internet. The charge directly targeted governments that knocked out WiFi in order to disrupt protester communication during the Arab Spring.

La Rue’s report went on to declare access to the Internet a basic human right, marking the first time an official UN document defended online access in such exacting terms. While the international community already largely condemned the governments’ actions, the severity of La Rue’s claim represented a fundamentally modernized interpretation of human rights. The rapporteur’s assertion reflects a striking reality of the contemporary world: access to the Internet now constitutes a prerequisite for full societal participation.

In countries like Libya and Egypt, online forums gave rise to highly organized revolutions that successfully toppled entrenched regimes. In parts of the world where the government actively silences dissent, the anonymity of online interactions provides one of the only mechanisms for resisting oppression and rallying protestors.

Holding other nations accountable for disallowing online interaction represents a global priority. Powerful governments and international organizations should punish states for restricting Internet use, using diplomatic influence to enforce the right to Internet in the same way they impose other international norms. For oppressed citizens, the right to online access is the right to popular uprising.

In the United States, any threat of the government eliminating Internet access remains a faint and foreign concept. Americans can and regularly do express their political discontent online at the same time as politicians sign bills that protect net neutrality and declare the Internet a public utility. Despite this basic freedom, underprivileged U.S. citizens face a different kind of barrier to the right to go online — Internet is damn expensive.

In 2013, the New America Foundation conducted a study comparing the cost of hundreds of basic broadband packages around the world. Across many levels of download speed and service, America consistently provided the highest prices. In New York, for example, it costs $70 a month for low to mid-range download speeds. Comparable services in London go for as little as $38. Mid-range service runs $99 per month in San Francisco, compared to $35 in Paris.

A report from the Organization for Economic Cooperation and Development echoes New America’s findings, ranking the U.S. 30th out of 33 countries in online affordability. Getting online isn’t only more expensive in major cities; U.S. citizens pay a premium all over the nation.
Americans can thank the country’s highly concentrated broadband market for their exorbitant Internet bills. Nearly all high-speed service in the U.S. is provided by one of seven major companies, with one or two of these providers generally dominating a local market. When consumers have little to no choice in who provides their broadband, they’re forced to accept the poor service and high prices that characterize the American Internet industry.

For many users, costly Internet bills represent an inconvenient but manageable expense. For Americans who can barely afford to keep food on the table, however, the cost of online access serves as yet another feature of poverty’s cyclical nature.

Unemployed Americans face a daunting task if they hunt for jobs without access to the Internet. Online job listings provide searchable and concise results within minutes, allowing users to canvas large areas for available work. Without access to these online databases, qualified workers struggle to locate potential employers, missing out on opportunities because they simply weren’t aware the openings existed. If they do find an open position, entry-level jobs will expect applicants to submit a resume online and provide an email for additional correspondence. With today’s path to employment so heavily structured around the Internet, workers who can’t go online struggle to find the jobs that would ultimately allow them to afford it.

Beyond the search for employment, limited access to the Internet means limited access to a wealth of information that the nation’s poorest citizens desperately need. Important health material for aging seniors, study resources for students in underfunded schools, voting information for politically underrepresented minorities; empowering knowledge is locked away online, withheld from the impoverished classes whose lives would improve the most if they could only reach it.

Existing public services that provide Internet access, like local libraries, help increase online availability but can only go so far with limited funding. Internet access on a first-come, first-serve basis, during specific hours of the day and potentially miles from home still leaves offline citizens at a severe disadvantage.

Recognizing the benefits of a technologically empowerment, some cities are introducing promising new programs that facilitate the right to go online. In New York City, public libraries now loan out mobile hotspots, allowing members unlimited Internet access from home for a designated period of time. Other cities go to more radical lengths, creating “municipal broadband services” to compete with private providers. In Chattanooga, Tennessee and Bristol, Virginia, government sponsored broadband provides a slow, but reliable and affordable alternative to the private services that dominate the local market.

Whether it’s as simple as extending library hours and services, or as radical as implementing a public broadband network, American cities need to continue the movement toward reducing the absurd cost of getting online. Access to the Internet is key to empowering the lower class, vastly improving lives in a way that ultimately benefits the entire community.
From protestors resisting oppressive regimes to American workers combating joblessness, it’s clear that people who struggle to access the Internet often have the greatest need for its services. In a world where nearly all aspects of life contain an online component, Internet access now represents part of what it means to be human. Affordable and unfettered Internet constitutes more than a privilege — it’s a universal right deserving universal protection.
Matthew Meyer does, however, support disciplinary bans for repeat selfie offenders.