The Daily Nexus
News
Goleta State of the City Addresses Town Development, Finances
May 14, 2015 at 11:00 am by Emile Nelson 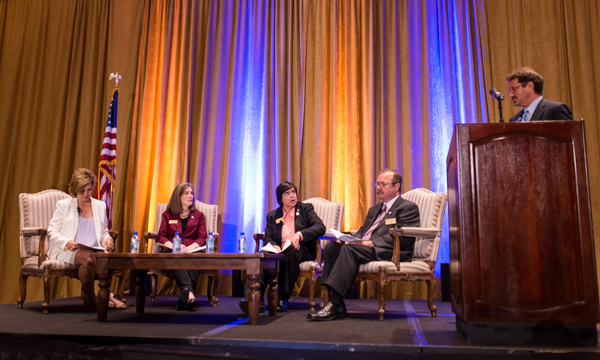 The Goleta Valley Chamber of Commerce held the eighth annual Goleta State of the City on Thursday at Bacara Resort & Spa.

At the event, speakers including Goleta Mayor Paula Perotte, City Manager Michelle Greene and Goleta Valley Chamber of Commerce President and CEO Kristen Miller spoke on topics such as the city’s financial progress and the development of Old Town Goleta. The crowd at this year’s event was the largest yet, with almost 450 representatives from local businesses, media and government in attendance.

Perotte said Goleta’s recent achievements — which include ranking 79th in Livability.com’s Top 100 Best Places to Live in the U.S., achieving 3.9 percent unemployment and placing in the top 50 safest places in California — show the 13-year-old city’s future is secure.

“The state of our city is bright and our future looks lustrous, luminous and radiant like the California sun,” Perotte said. “We have much to celebrate.” 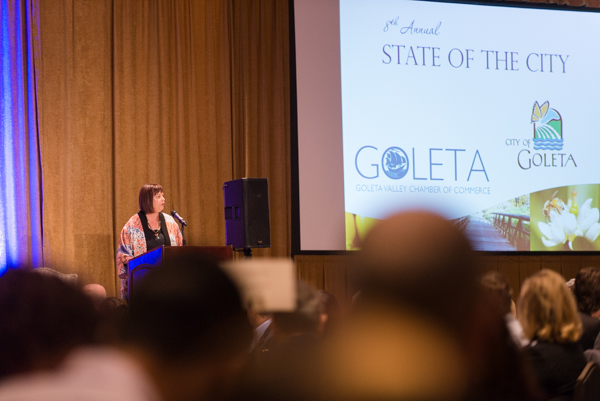 According to Perotte, the ice skating rink near Camino Real Marketplace is opening to the public this fall, and the city will be hosting special Olympians to prepare for this year’s Summer Special Olympics in Los Angeles.

Perotte also said the city plans to begin construction on the Hollister Class 1 bikeway, among several other public works projects.

Miller said the work being done in Goleta will benefit a wide range of residents including small business owners and those in need of medical care.

“Goleta Valley Cottage Hospital Foundation has worked tirelessly for many years to fundraise and bring our community a state-of-the-art hospital that supports the growing needs of our area,” Miller said. “The new facility is opening in July.”

Greene said the city was recognized on many fronts during the year, having received an Award of Merit from the California Association for Local Economic Development for the Goleta Entrepreneurial Magnet, a Green Business Certification from the SB county Green Business Program and a Certification from the State Housing and Community Development (SHCD) for its Housing Element. The highly selective SHCD certificate allows the city access to state funds for planned affordable housing developments, according to Greene.

According to Greene, retail and industrial vacancies are both low at less than three percent vacancy, and hotel occupancy increased 13.8 percent over the last year.

Greene also said an increase in revenue from taxes such as the Transient Occupancy Tax and Sales Tax indicate Goleta’s financial future is bright.

“Goleta is an excellent place to start and run a business,” Greene said. “Goleta’s overall position is solid and our future is promising.”

Miller also said there are plans to revamp Goleta’s Old Town and capitalize on the uniquely authentic quality that it offers Goleta residents.

“We have so many great neighborhoods in Goleta that are already flourishing,” Miller said. “But there’s something that feels like our soul and our purpose when we visit Old Town.”

President and CEO of Montecito Bank and Trust Janet Garufis said the Goleta business community has played a crucial role in the immense progress the city has made over the past years.

“The businesses in Goleta are so connected to each other, it is just extraordinary,” Garufis said. “There are so many great things happening in this community and that could not happen without the support of local businesses.”

According to Bacara Resort & Spa General Manager Kathleen Cochran, supporting local business in Goleta is crucial to the development of the city.

“I live here, I do all of my business here,” Cochran said. “Community partnership and hospitality go hand in hand.”