The Daily Nexus
News
A.S. Senate Talks COSWB Funds, Monday Night
May 14, 2015 at 5:00 am by Noah Brennan-Greenbaum and Alyssa Schmidt 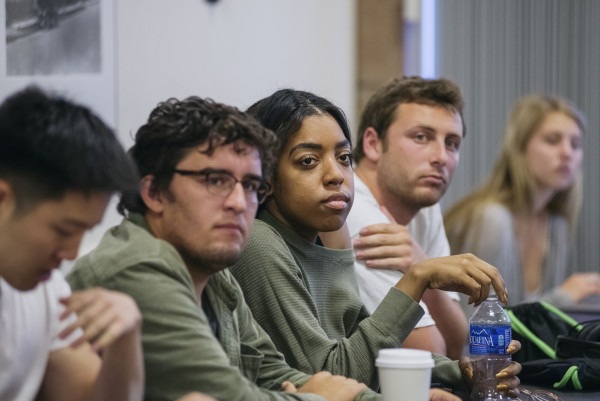 The Associated Students (A.S.) Senate met Wednesday night in the UCen’s Flying “A” Room for their weekly senate meeting.

A.S. Chief Financial Officer Andre Theus said due to lack of time left this quarter, he would like to override the legal code and pass a bill that would allow the transfer of $10,000 earmarked for “Professional Development” from the A.S. budget to senate unallocated funds.

“The process is usually [as follows:] I would have to present the idea two weeks out from the time it needs to be done, and that would have to be ratified by Business and Finance by 50 percent plus one,” Theus said. “Because it’s Week Seven that’s not really going to work so I will need you all to essentially override the legal code and approve that.”

Theus said Professional Development money went untouched by A.S. this year because it was not needed and could be put to better use by the senate to fund events and groups.

“I think if there was a need for it, it would have been used, but I don’t think there is a need for it in Associated Students,” Theus said. “I know groups that it could help out a lot internally at the end of the year.”

A.S. Senate passed the bill authorizing the transfer of the funds that Senate allocated.

“We had a remarkably fast and thorough response because your executive officers were actually meeting at the time of the incident, so we were able to pull together a very quick response,” Guthy said. “I’m very proud of how we handled it. I actually got a lot of administrators and community members thanking students for their involvement, not just executive officers.”

“We have two finalist candidates for the Vice Chancellor of Student Affairs position,” Guthy said. “As you all know, this is a very important position because, obviously, they interact the most with students and deal with student life and a lot of the issues that are pertinent to us.”

According to Guthy, Vice Chancellor of Student Affairs candidate Monroe Gordon will meet with student representatives on Thursday.

“One of the candidates will be on campus tomorrow and he will be having a conversation with students starting at 2:30 in the Mosher Alumni House,” Guthy said. “I think a select group of students were invited to that, but, to my knowledge, it’s not a closed meeting.”

According to Theus, students are not well enough informed about the Vice Chancellor of Student Affairs search committee.

“Students were not consulted ahead of time in designing the interaction that the candidate will have with students,” Theus said. “The current student meeting is private and invite-only.”

Theus said students should have the opportunity to interact with candidates because the Vice Chancellor of Student Affairs is meant to represent students.

“There should be an open space where students can meet this person or persons,” Theus said. “This is a very important position for students and we’re sidelined. At least the students on the search committee should be able to observe the candidate while they meet with deans and admin to see how they are as an ally behind closed doors.”

“Essentially there is a history of inappropriate spending with student fees,” Hill said. “I think there’s some serious misuse of funds. They may not be intentional, but it’s occurring, and you can see it started in 2013.”

Hill said, despite a $2,500 allocation to advertising, the money is not being used efficiently and COSWB has not been responsive to his inquires about inefficient funding. According to a document Hill shared with the senate, COSWB paid $6,000 for T-shirts and $295 for a tablecloth in the past year.

“They’re essentially spending vast amounts of money on advertising without any actual function,” Hill said. “They are not providing the services they should be in comparison to the funds they have.”

A.S. Senate then moved on to debate the legitimacy of the Bill to Outline a Procedure for the Review of the Executive Branch Expenditures, and whether the bill overstepped certain powers.

Senator and second-year history of public policy major Cassie Mancini said she supports the bill because it requires the executive branch to follow the same rules as other A.S. organizations.

“This isn’t overstep [of authority] because we’re not actually approving or disapproving … we’re just having [expenditures] reviewed,” Mancini said. “They would have to submit their minutes to us and their expenditures before they spend the money, like any other A.S. agency.”

A.S. Senator and third-year student Michelle Moreh said the bill is problematic because excessive control of the executive office would result in inefficient financial delegations.

“From what I understand, I still see it as an overstep. They would have to wait for a whole week for us to approve their spending,” Moreh said. “As we know, things move really fast within the association. If the executive officer needs to move those funds in the time frame of that week and he can’t do it within decent time, that causes problems.”

A.S. Senate ultimately passed the Bill to Outline a Procedure for the Review of the Executive Branch Expenditures by a 17-2-0 vote.

A version of this story appeared on page 4 of the Thursday, May 14, 2015 print edition of the Daily Nexus.