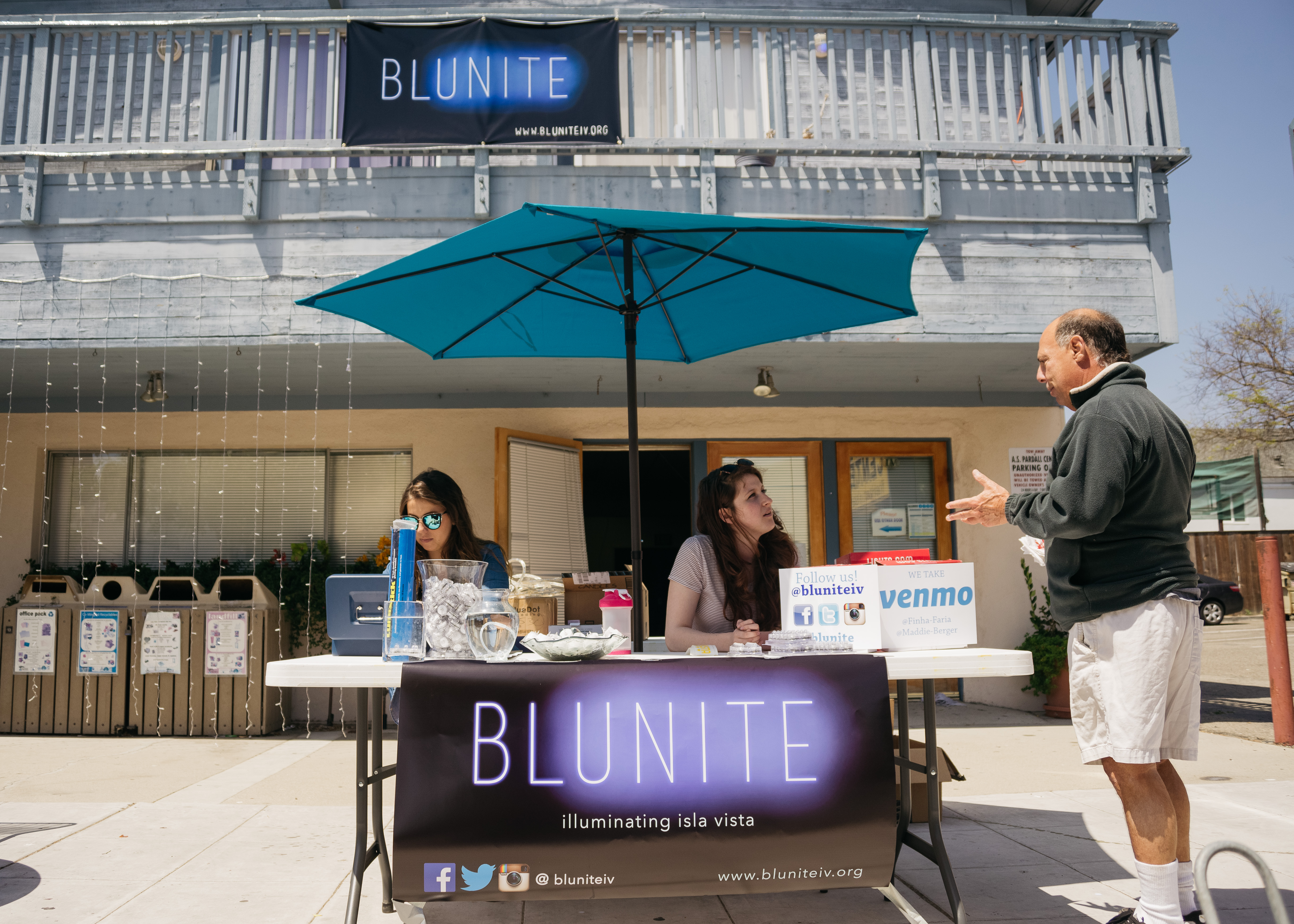 Blunite seeks to unite I.V. through the sale of blue LEDs, commemorating the one-year memorial of the May 23 Isla Vista Mass Murder. Hari Patel/Daily Nexus

Students from Art Professor Kim Yasuda’s class “I.V. Open Lab” began selling blue LED tea lights and ropes on May 9 to be placed throughout UCSB’s campus and Isla Vista as part of “Blunite,” one part of the series of May 23 memorial events.

I.V. Open Lab students have asked individuals to place the tea lights at their residences and have worked with local business owners to plan light installments in I.V. restaurants. The Blunite project was inspired by the Media Arts and Technology graduate program’s idea to line Pardall Tunnel with blue LED lights to signify the connection between I.V. and UCSB. The Blunite lights use LED technology invented by Nobel Prize-winning UCSB Professor Shuji Nakamura.

“Blunite is a way to unify us together in solidarity and bring light and hope to our community even though there was so much darkness last year,” Berger said. “We are really trying to focus not so much on the memorial or the tragedy but more on how to show that we are just as unified as we were last year as a community, we really want to make this an annual tradition.”

“Every single business we’ve talked to has been like ‘That’s an awesome idea,’” Berger said. “We just installed Sorriso’s and Buddha Bowls’ yesterday.”

Berger said Blunite hopes to distribute the same LED lights at the memorial candlelight vigil planned for the evening of May 23 and that Blunite provides an opportunity for individuals to support I.V. even if they no longer live in the community.

“This could be something that people could do in New York City if they went to school here and are in grad school now and want to show their support, they can put a tea light in their window and take a picture and send it to us,” Berger said. “Businesses can get involved and students can get involved … it’s a different way of getting people to join together in something.”

I.V. Open Lab student and third-year communication and art major Raphaella Faria said the project organizers hope every I.V. resident will get involved with Blunite so the community can “glow blue” by the end of May.

“People are cooperating really well but we are just trying to get the word out faster,” Faria said, “We are hoping that, with people starting to show their support, others will be inspired by them.”

“It’s supposed to be an all month thing,” Berger said. “It’s kind of turned into something where at the vigil you can carry them, so we are trying to get funding so we can pass them out at the vigil. It’s a good way to not have flame and wax dripping on everything.”

According to fourth-year economics and accounting major Brian Attard, who purchased a light Saturday at the Pardall Center, Blunite’s message of unity will benefit I.V. during the anniversary of the events of May 23 last year.

“It’s very important to preserve the memories of the people we lost and to look at their families and how they moved on and just draw strength from that as a community,” Attard said. “It’s a nice gesture to have these lights, it’s very UCSB because the guy who invented them is a professor here so it all kind of works out.”

Blunite will use profits from the light sales throughout May to provide free tea lights for those who can’t purchase them for the vigil, according to Berger.

“The tea lights are getting sold for a dollar, but they cost us 70 cents,” Berger said. “So the extra 30 cents is coming back to us so that we can buy lights that we can just give out to people that can’t afford them, or at the vigil.”

Students can purchase tea lights and ropes at the Pardall Center, participating restaurants such as Buddha Bowls and Sorriso Italiano or by messaging the Blunite Facebook page.