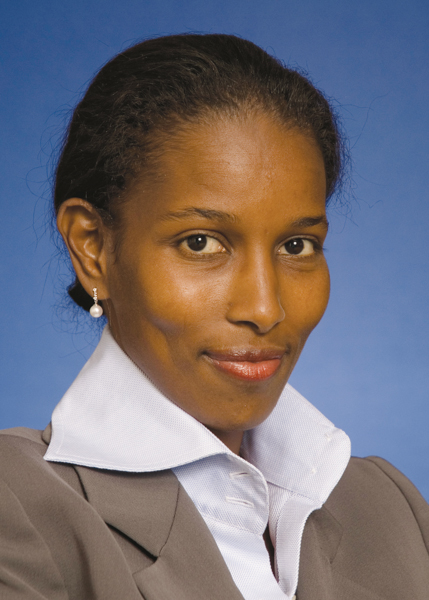 Somali-born human rights activist, author and politician Ayaan Hirsi Ali will speak on human rights abuses concentrated in the Middle East and West Africa at the Granada Theater on May 23.

Ali has written multiple best-sellers and has been named a Harvard University fellow and one of Time Magazine’s “100 Most Influential People.” She is also set to receive the Bradley Prize at the John F. Kennedy Center for Performing Arts.

Growing up in Somalia, Ali experienced and witnessed various human rights abuses. Facing an arranged marriage, she fled to the Netherlands where she completed a graduate degree and became a Member of Parliament.

The event is being organized by a small group of Santa Barbara community members, including Santa Barbara resident Sheridan Rosenberg and UCSB physics professor Philip Lubin.

There are issues going on in the world that are really worthy of a discussion. I think she speaks to that with more eloquence than anyone. – Santa Barbara community member Sheridan Rosenberg

Lubin said Ali will offer students an important message on how women are treated in other parts of the world.

“She represents a voice that is particularly important for me that speaks to the subjugation and oppression of women,” Lubin said.

Rosenberg said Ali will use her personal experience to shed light on important human rights issues.

“There are issues going on in the world that are really worthy of a discussion,” Rosenberg said. “I think she speaks to that with more eloquence than anyone.”

“Hearing Ayaan Hirsi Ali speak is a really valuable opportunity because a lot of the conversation surrounding honor killings and female genital mutilation are coming from a western, often skewed perspective,” Breen said.

Lubin said students should recognize the significance of the opportunity to hear Ali lecture.

“This is an opportunity to expand your horizons significantly near a person that literally puts her life on the line to express her views,” Lubin said.

Lubin said Ali‘s being on Al Queda’s “Most Wanted” list indicates the significance of her activism.

This is not a religious issue. This is a discussion of human rights. And women are humans, and therefore they have rights. – UCSB physics professor Philip Lubin

According to Lubin, Ali will offer insight on the relationship between religion and human rights abuses because she was raised Muslim, but now identifies as atheist.

Lubin also said Ali’s talk will focus primarily on issues of human rights, rather than religion.

“This is not a religious issue,” Lubin said. “This is a discussion of human rights. And women are humans, and therefore they have rights.”

Ali’s story can inform students about the frequency of female genital mutilation, which has affected more than 100 million girls and women alive today, according to Lubin.

“The prevalence of this is so high in certain countries” Lubin said. “Women should be horrified by this, and they’re not, because most have no idea what’s going on.”

According to Rosenberg, Ali’s personal story and character will add depth to the greater issues she will discuss.
“I think she is a very interesting person,” Rosenberg said. “She is poised, and she’s dignified and she’s brilliant.”

Further information and tickets are available on the Granada Theater website. Students can purchase discounted tickets for $14 using the promotional code “student.”

Ayaan is an inspiration for Muslims who live in fear of Islam’s threats of violence against Muslims who dream of a better life outside of Islam.

We ex-Muslims live in constant fear due to Islam’s intimidation against those of us who choose to live Islam and its Qur’an inspired sadism against both infidels and against Muslims too.

Islam thrives through intimidation and violence.

Arafat,
Thank you so much for your brave comment. We hope to see you at the event. You deserve credit and support for your courage to speak up.

b
Reply to  Sheridan

Yeah our resident compulsive racist sure is courageous.

Arafat
Reply to  b

I am color blind. Many of my heroes are black including Ayaan Ali Hirsi. I also greatly admiore Herman Cain, Allen West, Ben Carson among others.

The fact that I write honestly about Islam does not make me a racist it makes me honest.

You are absolutely right, Arafat. Hurling totally unfounded epithets like “racist” in response to your honesty is what bullies do. Islam is not a race, and like any other religion, its philosophy and beliefs should be subject to the scrutiny of reason. Nobody is arguing that the human rights of its followers should be curtailed, which is pretty generous given that common Islamic beliefs deny the human rights of non-Muslims, and Muslims themselves: The Pew Trusts found in a 2010 survey of Muslim attitudes that: “At least three-quarters of Muslims in Egypt and Pakistan say they would favor making each… Read more »

Thank you, Sheridan. I appreciate it and appreciate your support for this great woman.

Ayaan Hirsi Ali’s critics ought to know that she herself was forced as a girl to undergo female genital mutilation, and that she is an ex-Muslim, now an atheist. That exit is a very brave choice for anyone – many atheists lose the “love” of their families in the process – a sure sign their families belonged to a cult in the first place, because a defining feature of a cult is to place loyalty to the group over one’s natural bonds to one’s children. Reza Aslan has lied on national TV that FGM is an African phenomenon and not… Read more »

Genital mutilation is as American as apple pie! Here is what Ayaan Hirsi Ali has said about male genital mutilation, aka circumcision: “I think male circumcision is worse than an incision of the girl. With boys, a lot of skin is removed…With girls, a sharp object is pricked into the clitoris. It bleeds a little. And the whole family is satisfied and she is declared ‘pure’. Strictly speaking, that procedure is less dramatic than male circumcision.” Related quotes: “The same universal human right to an intact body that I have fought for on behalf of women and girls must apply… Read more »

Hans, we could base our opinions on selected quotes like Germaine Greer’s, who is a proud pedophile with her photobook on the “erotic charge” and “sensuality” of prepubescent and pubescent boys: http://www.amazon.com/Germaine-Greer-The-Beautiful-Boy/dp/0847825868 I prefer the World Health Organisation. The WHO strongly recommends voluntary male circumcision for its dramatic (up to 70%) reduction of HIV transmission risk: http://www.who.int/hiv/topics/malecircumcision/fact_sheet/en/ Other medical benefits of male circumcision are well documented in the scientific literature. Many adult men who have undertaken circumcision have reported no change in their health or sexual experience, and in many cases their sexual response has improved due to increased sensitivity.… Read more »

You seem to be ignoring the quotes I presented from Hirsi Ali and Soraya Mire, both FGM survivors. They both appear to have no problem condemning all forms of child genital mutilation, male and female alike. There are actually a wide variety of cutting practices that fall under the rubric of female genital mutilation, as defined by the World Health Organization. Some are quite extreme, as you indicate. However, there are a range of common less extreme practices that are no more damaging than male circumcision. The excision of the clitoral hood (prepuce), widely practiced in Malaysia and elsewhere, is… Read more »