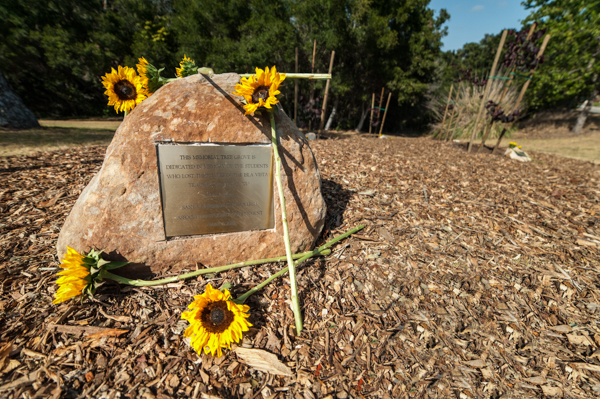 The plaque reads, “This memorial tree grove is dedicated in memory of the students who lost their lives in the Isla Vista tragedy on May 23, 2014.” The six trees can be seen in the background. Lorenzo Basilio/Daily Nexus

Santa Barbara City College (SBCC) held a memorial tree planting Wednesday to honor the six victims of the events of May 23 last year at the school’s West Campus.

“It is to honor and remember the victims through tree planting in order to have a permanent symbol of what happened last year,” Gaskin said. “It is for future generations to see so that it can live on in perpetuity and remembrance of those six victims.”

Gaskin said college is a time of “joy, celebration and discovery,” and the victims should not have lost that time.

“For those opportunities to be shattered is devastating, as it happened to the six young lives,” Gaskin said. “It causes reflection and calls to action for things to change.”

“I think it is necessary for us to use this space not only for something beautiful, but for those individuals who were killed last year in Isla Vista,” Brown said. 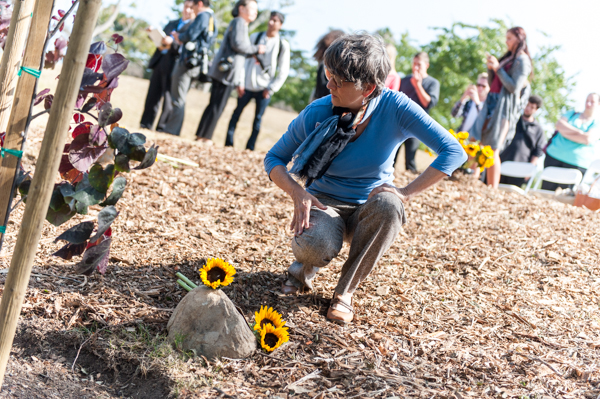 SBCC Associated Student Government Vice President of External Affairs and second-year business and administration major Caleb Ransom said the memorial grove will foster unity in support of those who were close to the victims.

“I think this is crucial for the families and friends of those who have passed away,” Ransom said. “We all mourn and I think this is ultimately important for the community and the colleges because it brings everyone together. It goes to show that we are human and here for a purpose.”

Second-year biology major Laura Guzman said the dedication event was “positive,” because it brought people together to heal.

“Victims died, however, people still express their concerns and support by remembering and honoring the victims,” Guzman said. “There is still light at the end of the tunnel and I think it is getting brighter because this beautification will remind us of the strength in unity.”

Guzman said the strong demonstration of community support is an effective step towards healing the wounds left by last year’s tragedy.

“Even though people are feeling pretty sad right now because we remember the tragedy, I am still thankful for being a part of this,” Guzman said. “I think it is important to remain thankful and give gratitude for the people who care to make a difference in sorrowful times.”

Rest in Eternal Peace George, James, David, Katherine, Christopher and Veronika. May your families find justice and closure for their enormous loss.
…and where is the memorial in Perfect Park for Diane Winkelman? Was she any less human or victimized?
http://www.edhat.com/site/tidbit.cfm?nid=79293