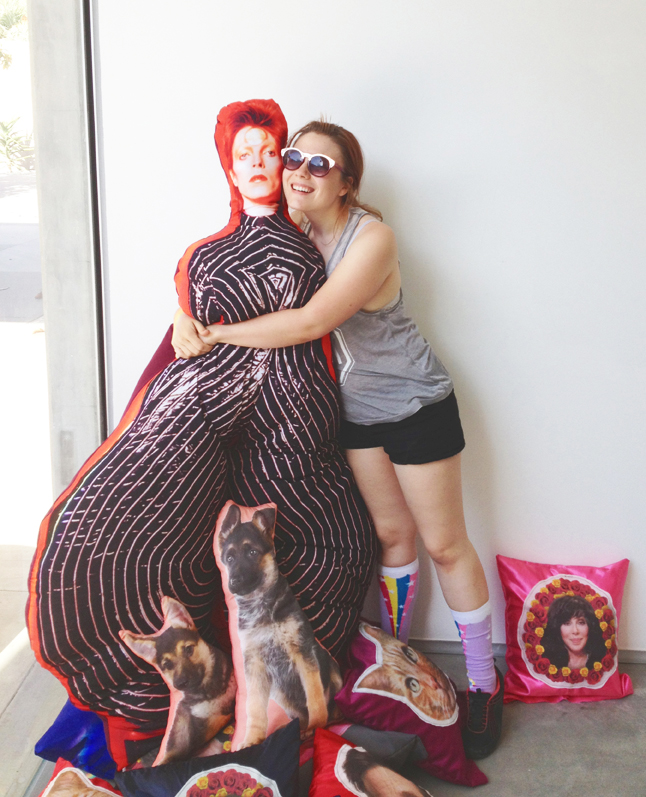 Demi Anter, a UCSB alumna and artist, hugs her life-size David Bowie doll while surrounded by PROXY SHOP pillows. The doll and pillows were originally made for her senior art thesis show, DEMOPOLIS, and are now sold online through her store, PROXY SHOP. Photo courtesy of Demi Anter.

At 10 after three, a girl wearing a flowing white blouse and silver sunglasses made her appearance at a table in front of the Coffee Collab. Her reddish hair framed her face perfectly, with blunt bangs hanging above her obscured eyes. She took a seat. In her hand was protein shake number one of the day.

“I hope I’m not out of it as I talk to you. I was up until six in the morning because my store launched today. But yeah, I’m feeling good, not like … ” she said, comically twisting her face into a grimace.

Demi Anter — La Quinta, California native — is an artist. In this modern age, artists are like a rare species. Anter perfectly fits the image of a recently graduated artist living a productive yet hectic life in hopes of paving a way to success.

The origins of her drive for art began a very long time ago at a 13th birthday party for her best friend. Her friend put on “Labyrinth,” the “cheesy ’80s movie” starring David Bowie as a goblin king.

“I became obsessed with David Bowie,” Anter gushed, “I had this heartfelt turning point moment when I realized, if I was ever going to meet him, which was my life goal, then I’d have to do something that made me famous, right? And he’d give me a hug and it’d be just magic!”

Anter eventually decided to enroll at UC Santa Barbara in the College of Creative Studies as both a literature major and an art major. However, the path to success wasn’t always clear.

“Fall Quarter of senior year, I was taking 29 units trying to finish. It was ridiculous. I was having a breakdown, it was terrible. So I realized my heart was way more in the art,” Anter said. “I dropped the lit major and graduated with an art degree. But yeah, when I was in college, what I did art-wise was … a ton.”

Anter is not joking when she says “a ton.” From spoken word pieces about sleeping with hipsters found at the UCen’s corner coffee shop, Nicoletti’s, to occupying a studio with a sculpture made of yards and yards of hanging fabric, Anter has done it all.

And when it comes to putting together a creative project, she is the kind of person that does anything but cut corners. For her end of the year senior thesis project, “Demopolis: Space//Magic//Art Show,” the artist spent five months just putting together the ideas that had been tucked away in her binder since the beginning of Fall Quarter.

Without even knowing it, this exhibit, which she described as “a city of parts of [her] brain,” would lead her to her next big project: her Etsy, Proxy Shop.

Demopolis had featured numerous fabric workings including pillows plastered with the faces of her muses such as David Bowie or Cher. A friend caught on. After “slapping [pictures of] them on Etsy,” Proxy Shop — named that for the sole reason that the word “Proxy” sounds cool by itself, but even cooler when accompanied by “shop”— was born.

Right now, her current project mainly consists of bringing a variety of quirky crop tops and tees to Proxy Shop. 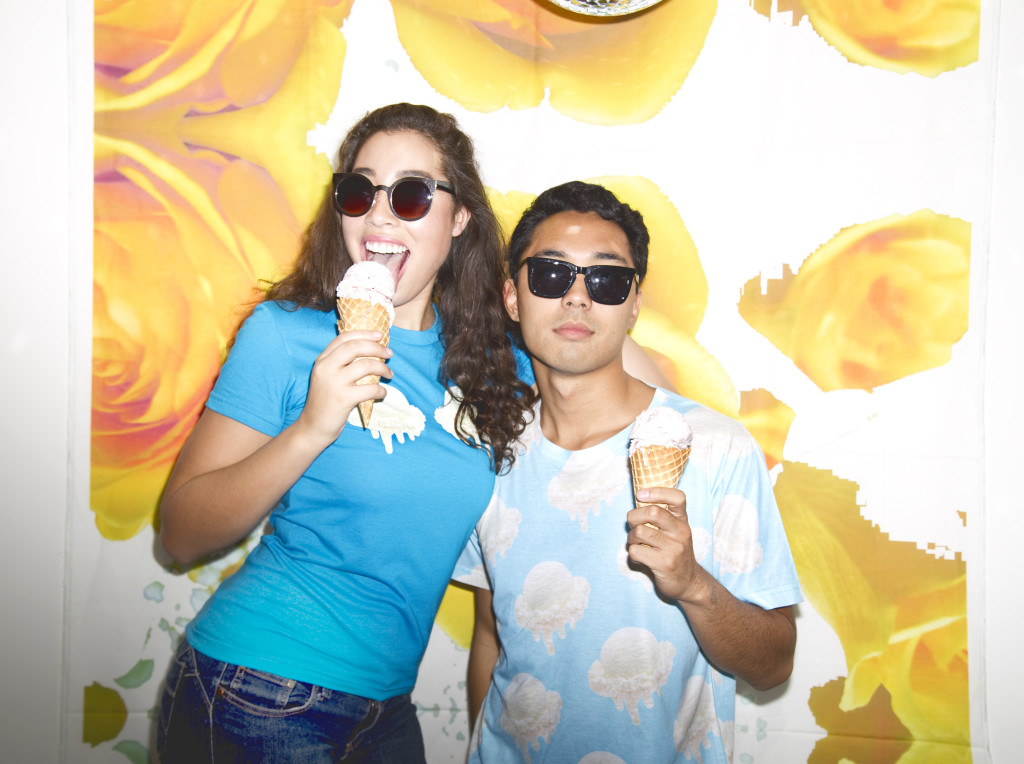 She said, “I realized with the Etsy stuff really recently that if I can actually make it work, then it can be something that allows me to work on other creative projects like TV without having to worry about a nine-to-five job … And I just had this realization that maybe that’s why I’ve been moving towards this.”

In a sense, Anter is one of many artists who are kicking down the “starving artist” stereotype. Nowadays, online marketplaces like Etsy or eBay are becoming vehicles for easier interaction between independent producers and customers.

“The cool thing about Etsy is that it’s not a super high-risk or big-investment to start it. But I also know that, for that reason, you still have to work harder to put in that extra work to get it to that level of a brand,” the designer disclosed.

The work being put in certainly shows. Proxy Shop opened last summer of 2014 and has since reached over 200 sales.

So what is next in store for Demi Anter?

Her goal is to move to Berlin, Germany. “I would use an internship to get into the city and meet other artistic people. There’s so much happening there; the art scene is flourishing. It’s a wonderful place to be,” she continued, “but my writing and reading [German abilities] are terrible. I hope that no one that interviews me in the future reads this for a job.”

Despite the twists and turns in the life of a young artist, Anter manages to get through the thick and thin with an unexpected mantra: “This is so silly, but sometimes, when I feel kind of bad about myself, I think, ‘you’re smarter than your average bear,’” she laughed. “But why I say it to myself is to remind myself that I can forgive myself for not always making the best decisions, and that’s okay. I have to recognize the successful things I’ve done as well.”

To shop for some of Anter’s yummy t-shirts, go to proxyshop.co. Proxy Shop will also be making its first-ever pop-up appearance at the Isla Vista Food Co-op on Tuesday, May 19 as part of The Catalyst Magazine IV Art Fest from 4:00 p.m. to 9:30 p.m. 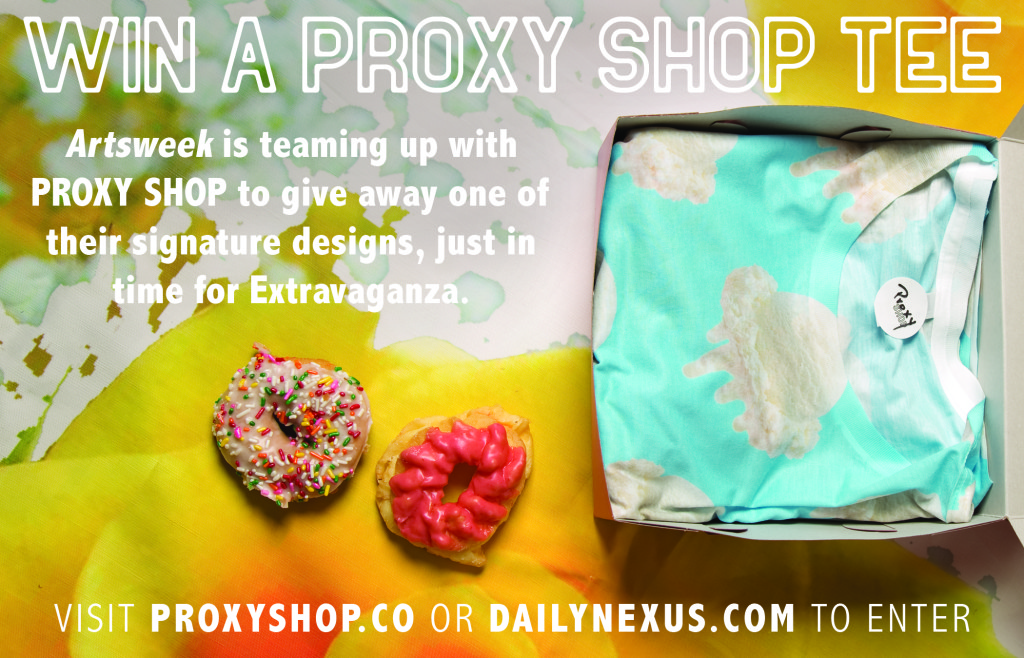 FREE T-SHIRT GIVEAWAY – PERFECT FOR FESTIVAL WEAR!
Artsweek is doing a special t-shirt giveaway with Demi Anter. The contest runs from now until Sunday, May 10 at midnight. A winner will be announced on Monday, May 11 and will receive their succulent t-shirt by Saturday, May 16 – just in time to wear for Extravaganza! To enter the contest, click on “log in” or “use your email” in the box below.