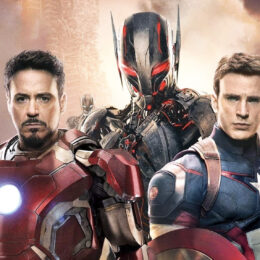 Like the Hulk, I feel I have two sides: one that wants to say how fun “Avengers: Age of Ultron” was and recommend that everyone see it. The other half thinks, “CRITIC SMASH!”  As much as I’d love to make that a gimmick and write half of this review in all caps, I shall keep calm and explain how this movie is simultaneously fun and useless.

The plot is entertaining enough, although it seems too similar to the last “Avengers” flick. Iron Man and the Hulk create an artificial intelligence called Ultron who, like all fictional artificial intelligences, wants to destroy humanity for your standard reasons. The Avengers assemble, fight both the enemy and each other, and bam! Stylized credits, quick glimpse of the large, purple Darkseid rip-off and then regular credits followed by a post-credits suprise scene. Stick around.

Anywho, what we get on screen is certainly satisfying by all means. While there is still some infighting amongst the Avengers, including the much-publicized and shamelessly fan-pandering (but still AWESOME!!!) fight between Iron Man and the Hulk, it’s not such an important piece of the plot like the first time around, and you don’t spend most of the movie waiting for these people to come together as a team.

The dynamic between the Avengers is still great; every character is significant and has a standout moment on screen. But Ultron is undoubtedly the most compelling character. Despite being a robot with unoriginal motivations, he still feels human through the way he speaks and acts thanks to the wicked talent of James Spader. Despite being a genocidal robot, he even gets a couple funny lines in! And it goes without saying that Ultron, as well as the rest of the CGI, look absolutely incredible.

In terms of more additions to the cast, while Elizabeth Olsen and Aaron Taylor-Johnson are fine as Scarlet Witch and Quicksilver (the latter of whom pales in comparison to the X-men version), Paul Bettany as the Vision overshadows them both. The makeup on Bettany is phenomenal, and he also gets some good lines and badass moments like Ultron.

But this movie is not without flaws. Joss Whedon may be the “god of the nerds,” but he is not Alfred Hitchcock by any means. Two established Avengers get a forced romance subplot that’s had zero buildup before this movie, and with that comes some seriously cheesy lines. Too often are there moments when Whedon practically stops the action just to emphasize a joke, which makes the joke seem less funny in hindsight (you’re trying too hard, Joss).

And towards the end, a certain character arrives at a pivotal moment in such a way that got me to say, “Well, that’s convenient,” and simultaneously think, “Why didn’t he show up to help earlier?” And there were a plethora of predictable moments, as well as a deus ex machina to cap off the conflict.

What’s probably most unfortunate about this movie is that, in the grand scheme of things, it doesn’t look like the events of this movie will be moving the franchise forward all that much. Thanks to “Avengers,” “Guardians of the Galaxy” and Marvel’s own press conferences, we know that this is all leading up to the two-parter “Infinity War.”

The movie teases what we already know and doesn’t provide any significant steps forward in terms of story, but provides marginally more material for the characters at least, hinting at what’s to come for the future standalone films.

In short, “Age of Ultron” is a filler movie. It’s a very fun filler with the humor and action we’ve come to expect from this franchise, but it definitely could have been less repetitive.

Alex Wehrung almost feels bad that he is no longer able to turn off his brain while watching a movie.

Just to make something clear: there is NO post-credits scene. What I originally wrote (and what someone changed) was:

“Stylized credits, quick glimpse of the large purple Darkseid rip-off and then regular credits. But surprise! No post-credits scene of the Avengers getting lunch. So don’t stick around.”

That was both a joke and a(n) (admittedly vague) recommendation not to stick around and watch text scrolling down the screen for a further ten minutes.