The Daily Nexus
On the Menu
One More Reason to Join Los Agaves’ Bandwagon
May 6, 2015 at 6:30 pm by Allison Wright 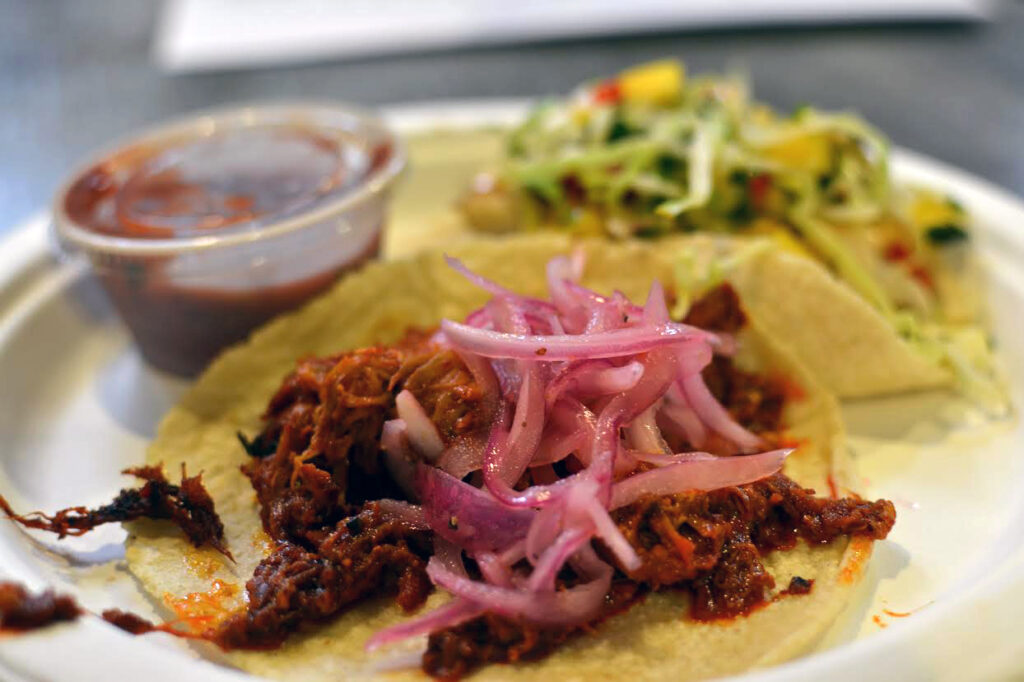 In honor of Cinco de Mayo (which, just as a reminder, should not be used as an excuse to drink like American Independence Day), Los Agaves, the local brand of upscale restaurants specializing in Mexican cuisine, revealed a series of pop-up appearances at the Santa Barbara Public Market located on 38 W Victoria St. Downtown. Beginning Tuesday morning, the brand took root in The Kitchen, the SBPM’s multi-purpose, fully functioning space for cooking demonstrations and tastings, where they will return every Tuesday throughout the month of May.

The temporary mini-restaurant offers a limited menu, but what it lacks in quantity, it regains in specialty. Only three items, the Tacos Rajas con Queso and shrimp or fish tacos, of the nine total can be found on Los Agaves standard in-house menu. In addition to these restaurant favorites, the pop-up kitchen features street-style tacos in a variety of meats, as well as a riff on their ceviche tostada that substitutes green apples, jicama and cucumber in place of avocado and guacamole.

I sampled two of the street tacos: one common and one rare. The fish taco comprised of grilled halibut topped with a chipotle sauce and mix of mango, cabbage and fresh red pepper, all smothering a homemade corn tortilla. While the tortilla was quite small, only the size of a saucer, the large catch of firm white fish and its generous verdure of toppings made picking up, let alone eating the taco, satisfyingly difficult. The first bite brought the aromatic chipotle to the palate, and each nibble of the thick, fluffy tortilla had a pleasant warmth on the fingers. While the subtly spiced sauce accented the hardy, slightly flaking fish, the taco as a whole paled in comparison to my other selection.

The Cochinita Pibil was a surprising sight on the pop-up menu. Quick to try anything new or difficult to find, I leapt at this traditionally cooked Mayan meat. Like the fish taco, the achiote- and guajillo adobo-marinated pork arrived on a perfectly round tortilla. But unlike the other dish, the cochinita pibil was more conservatively adorned. The faint magenta slivers of pickled onions complimented the bright, adobe-colored shredded pork. After carefully pinching one half of the taco and taking a bite, blood-like drops of the marinade fell onto my plate, making each subsequent taste of the tender cochinita (which means suckling pig, though the filling for this taco came from an adult animal) increasingly more primal. My incisors hungrily ripped into the citrusy and savory meat and the slightly acidic onions while I took in the earthy aromas imparted by the banana leaves that the meat was slow-cooked in. Let’s just say, this pork was killer.

Prices range from $2.95–5.50 per taco, with the seafare options falling on the upper end of the spectrum. While perhaps pricey, one could enjoy a full meal of paramount quality for under $7. The Los Agaves pop-up restaurant will be open for lunch from 11:30 a.m. to 2 p.m. and dinner from 5 to 8 p.m. for the final three Tuesdays of May. Whether looking to try Los Agaves for the first time or hungry for any new dish their chef creates, a trip to the SBPM should be in order for any taco fan.