The Daily Nexus
Opinion
The Disconnect Between Police and Students
April 30, 2015 at 6:00 am by Beth Lebens 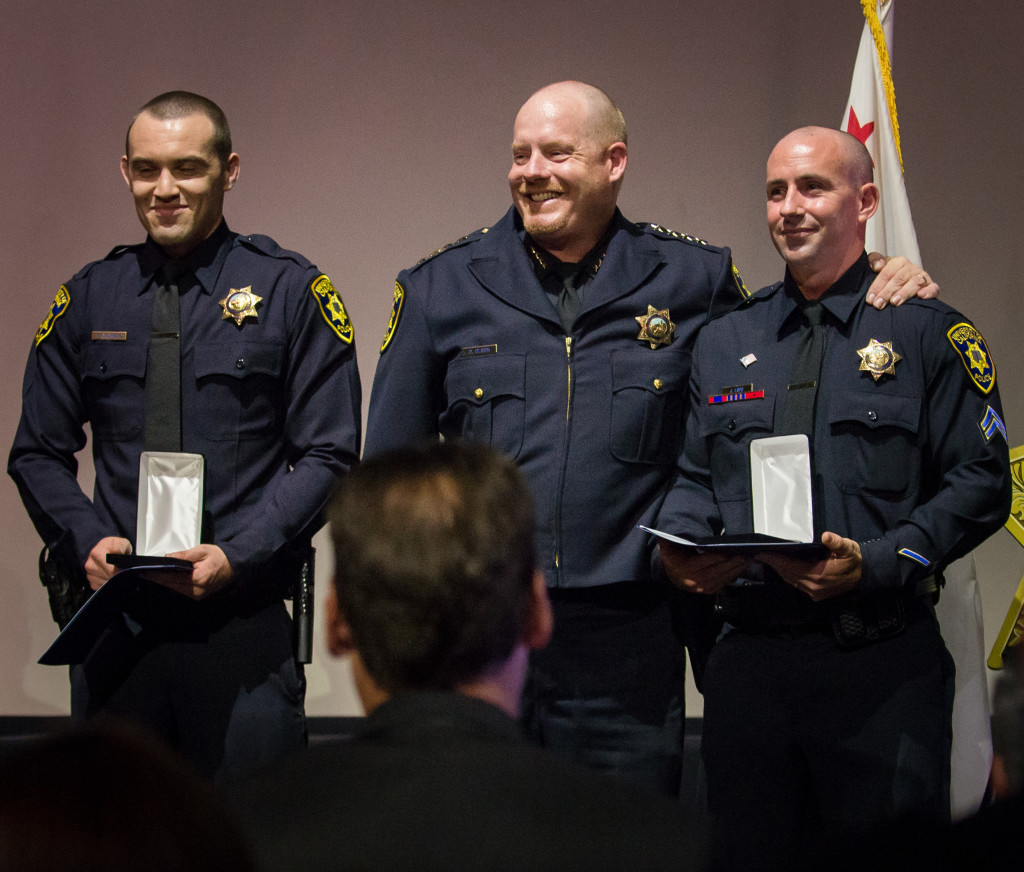 The Santa Barbara County Sheriff’s Office and UCSB Police Department held a public safety awards ceremony last night to honor the performances of deputies and officers who responded to the Isla Vista mass murder of May 23, 2014. While I appreciate law enforcement’s role in protecting our community, something needs to be said about the many oversights I witnessed at the event and the greater problems they clearly represent.

I attended the ceremony as a news reporter with every intention of writing an article covering the event and seeing it on the front page of the Nexus the following morning. Being a reporter, I scanned the audience in search of students to bombard after the ceremony to ask for comment. My goal was simply to bring student voice to my planned article. I did not see a single student in the audience — just officials, their families and public figures or their representatives making obligatory appearances. I grew uneasy trying to understand how an event pertaining to something that affected UCSB more than anything could entirely lack student presence.

Next, I realized the lack of trigger-warning for an audience about to hear a detailed narrative of the events of last year’s tragedy. Cops may be desensitized to such talk, but their lack of consideration for the unaccustomed civilian is just one more indicator of the disconnect between the I.V. community and its law enforcement. I felt more and more that the ceremony was far too self-serving. I looked at my program and realized the only tribute to the six victims was a collection of grainy photographs on the very back. By this time, I was dreading writing my article.

I resolved to do my job anyway and waited after the event while award recipients took pictures with their families. When the time was right, I approached a group of them. Then came the final straw. When I asked if any of the officials in the group could comment for the Daily Nexus, they looked at each other, clearly communicating annoyance, and dispersed, leaving one unlucky deputy in front of me. He looked over at his colleges like they had abandoned him, then he chuckled. I asked him my first question and he answered so swiftly it was insulting. His disregard for me was obvious and, at that point, I felt troubled not only about the insensitive, uncomfortable ceremony, but about the overall state of student-cop relations.

If I had the chance to talk to the award recipients who so quickly scattered, or if I had felt that the deputy with which I did speak respected me, I would have thanked them for their service to our community and done my best to have a conversation that would have fostered further student-cop communication. That conversation would not have undone the vast amount of tension between students and cops, but it would have been one positive interaction between a cop and a student. In I.V., that is something.

At this point, I would be remiss not to say there are officers and deputies who have consistently been willing to speak with me during my time as a reporter, namely Lt. Rob Plastino from I.V. Foot Patrol and Lt. Mark Signa from UCPD, and I am sure there are others. My interactions with people like Plastino and Signa leave me feeling hopeful about our cops, and in the days following, I defend our cops when a friend says, “Fuck the police.” The influence these communications have on my attitude proves how abstract the relationship is between UCSB students and cops, as it is built on a collection of small interactions between individuals from each. This is why my experience today was so alarming.

My brief, failed interaction with award-winning law enforcement personnel caused me to rethink the ceremony I had been covering. It aided my understanding as to why I felt so uncomfortable during the event and prompted me to forgo my news article and write up this opinion piece.

Many of our local officers really are well-meaning public servants and others are genuine assholes, but that remains virtually irrelevant until fundamental changes occur.

I.V. needs changes that bring students and cops together for an event to solemnly remember a tragedy a community shared by thanking first responders. Students and cops share the burden of making changes that allow for such unity, but today, it was in the cops’ hands to hold a less self-serving event and include their community — or to at least respect a student journalist who wanted a comment from a deputy with an oversized medal of valor around his neck.

Emergency personnel who prioritize the safety of others should not go unthanked, but a ceremony designed to honor such personnel should certainly not be uncomfortable and problematic, especially given that the relationship between police and students is so delicate.

Glad to see Sam and Alice were able to focus on what the article is actually trying to argue, way to add relevant material to a conversation we all seriously need to have.

Peter, we are all university students here. We shouldn’t be taking articles with spelling and grammar errors seriously because we hold ourselves to a higher standard. If you’re going to publish an article in a school paper the very least you can do is check for those mistakes.

Question for ya Allice. How much do you rely on spell check? Me personaly? I’m an English major in the Honors program and I suck at speling. Just becuase I sea red squigly lines on the page doesnt meen I miss the pt. of an artical.

Dearest Alice and Sam, A wise woman once said, “Everybody makes mistakes, everybody has those days. Everybody knows what, what I’m talkin’ bout, everybody gets that way.” Luckily, our fabulous ed staff and copy team caught all the mistakes in this article (as you can see in the version of this story that appeared in print on April 30, 2015). Alas… we happened to pull the wrong version of the story from our files while uploading. Good on you to notice, though! Glad to know people read the Nexus so carefully. By all means, spread the word. All publicity is… Read more »

Down with the Nexus!!!! TBL all the way

Oh please. These self-righteous Nexus writers commenting… This is why you guys didn’t get your fee increase. There are constant spelling errors in these articles. I have seen misquotes, mislabeling of people in photographs, and many more examples of your blatant disregard for quality journalism. TBL FOR LIFE

TBL is totally great, I’m not sure why you need to pick either Nexus or TBL. Journalism is journalism, and we both work with the common goal of reaching the public. We have our individual strengths – apparently TBL’s is proofreading Nexus opinion pieces. We appreciate your unpaid, freelance work. I’m sure if the Nexus had an entire week to edit stories, we’d be as error-free as you supposedly are at TBL, or maybe we’d even find the time to copy-read some of your stories for you in return. In any case, with only one UCSB newspaper, there wouldn’t be… Read more »

The Bottom Line verses Daily Nexus debate is a rivalry that shouldn’t exist in my mind, but if we are throwing punches, at least the Daily Nexus has not become a mouthpiece for a difunctional single party student government. Both papers have their merits.
The pejorative stance supporters of TBL have taken against fellow students at the Daily Nexus is childish and indicative of the toxic nature of TBL’s parent organization.

I wonder where all the vitriol inducing emotion is coming from?

Granted, yes I acknowledge the errors. However getting past that, there has been an opinion offered on a topic worth discussing.

There are times when information comes my way that is laced with “vitriol”. So, when I share the info with friends, I remind them to get past the vitriol and look for the content. Look for their talking points and facts.

I would say in this case… Get past the typos and errors and get to the content.

I don’t think you can call yourself a reporter when your “report” is just rambling about yourself.

Another disappointing and poorly written article by the Nexus. The quality of the Nexus has been declining for at least 4-5 years running. It has gotten so bad that it prints garbage like this on a weekly basis. The author of the article went to the CA Sheriff’s award ceremony and then complained that it focused too much on the cops and what the accomplished. What a BS complaint. The writer’ petty, childish and self centered thoughts and attitudes show a lack of intelligent thought about the issues. Why does the Nexus only print articles for the least competent and… Read more »

What we know: Most cops are anti-social predators hiding behind a badge – they aren’t either smart or educated enough to express themselves in public – only through collective coaching and the efforts of the Police Benevolent Association and their union reps do they stay out of jail themselves – they are coached to avoid contact with the public and the press in a non-official context. Most students are anti-social introverts hiding in an ultra-liberal enclave wishing “the man” and his laws would go away – they are socialized by their professors and activist groups to lash out of the… Read more »

Just for a brief moment Beth, can you please consider that the award ceremony is not about you. The ceremony is to bring attention to the officers who responded that night including one who received a medal of valor who happens to be a rookie and it is not an event for you to get attention from them. You have to forgive them if the over sized medal of valor is such a distraction but you are a reporter, you should pursue your story. Maybe you were hampered by the lack of trigger warnings that reporters usually get on the… Read more »

This was a public awards ceremony for law enforcement personnel, so I don’t understand why you would take issue with the focus being on the law enforcement personnel receiving decorations. Also, I find it very comical that you would take issue with there not being a “trigger warning,” common sense would tell you that they would speak about the events for which the cops were being given awards for.