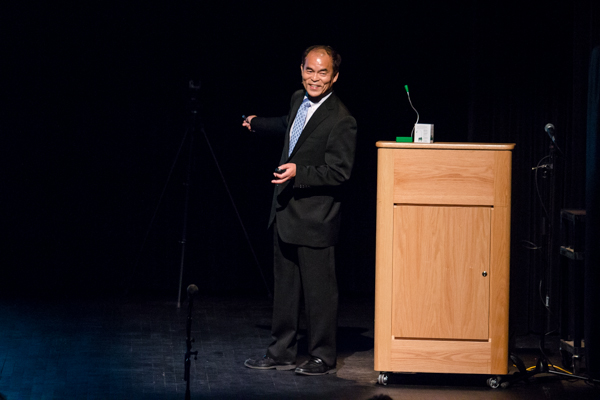 Nobel Laureate and UCSB Professor Shuji Nakamura gave a talk last night in Campbell Hall on his research on LEDs and his invention of blue LEDs in the early ’90s. McLane Brown/Daily Nexus

Nakamura spoke on how his research in developing blue LEDs has allowed lighting technology, among other things, to become much more efficient and environmentally friendly. Nakamura began studying LEDs when researching and publishing papers on the scarcely studied compound GaN for his Ph.D. and eventually invented the blue LED and white LED in 1993. The Royal Swedish Academy of Sciences awarded Nakamura the Nobel Prize in physics in 2014 alongside Isamu Akasaki and Hiroshi Amano, who contributed to his findings.

He has opened the door to affordable energy efficient lighting for every person in every nation — a monumental contribution to all of humankind. – Chancellor Henry T. Yang

“He was awarded the 2014 Nobel Prize in physics not just for inventing the best blue laser, but for being the first to create the brightest blue light, using indium gallium nitride,” Yang said. “Fast-forward to the year 2000, UC Santa Barbara was incredibly fortunate to have Shuji join our campus. His hire was like mounting the jewel in the semiconductor crown at UC Santa Barbara.”

“We are all here to witness first-hand the brilliance of professor Shuji Nakamura and his blue LED,” Yang said. “He has opened the door to affordable energy efficient lighting for every person in every nation — a monumental contribution to all of humankind.”

Nakamura began his talk with the history of LED lighting, from growing high-quality gallium nitride (GaN) crystals in 1991, to developing blue LEDs in 1994 and up to the present. The revolution in generating white light, achieved by combining blue light with a yellow phosphor, enables energy-efficient lighting, displays, medicine and the next generation of Blu-ray optical storage, according to Nakamura. 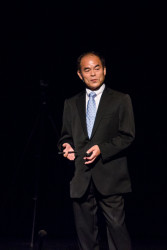 “To make the white color, you get the blue color and the yellow color and they make white. This is only two colors so it is cheaper,” Nakamura said, “I invented the blue LED 23 years ago, so since that time many people have told me ‘oh you will get the Nobel Prize,’ but it took 23 years.”

According to Nakamura, his inventions will allow the world to generate 185,000 fewer tons of carbon dioxide by 2030.

“Lighting accounts for 35 percent of energy consumption in California,” Nakamura said. “By 2030, 46 percent of electricity is saved.”

“Nakamura was the one who made the breakthrough, period,” Yang said. “End of the statement. And no one else was near that breakthrough. Shuji would win the Nobel when LED lightbulbs had replaced Thomas Edison’s incandescent bulbs at Costco.”

Haruna Morohoshi, a representative from Soraa, the LED manufacturer founded by UCSB professors Nakamura, Steven DenBaars and James Speck, said it took time for the world time recognize the potential in LED lighting.

“Most consumers don’t understand the energy saving aspect … how much you save every month,” Morohoshi said. “It takes a lot longer for consumers to realize the value of LEDs. I think that’s why 20 years after he invented it, he finally got the Nobel Prize. The world is finally recognizing the value of LED lighting.”

Fourth-year economics and accounting major Hajime Okamoto said he was intrigued by Nakamura’s research and speech.

“It was great and he was funny,” Okamoto said. “I had to come here because I was really interested.”