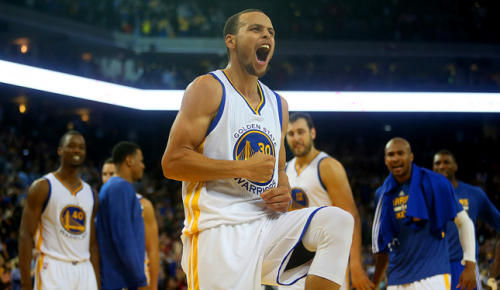 The Golden state Warriors finished off their four game sweep of the New Orleans Pelicans with a 109-98 victory on Saturday night. As the team with the best record in the regular season, the Warriors are many peoples’ pick to win the NBA Championship this year and now they wait for the other series to finish up to find out who their next opponent is. Here are some thoughts from the series as well as what the Warriors have to do to keep the train rolling in the next round:

The Warriors showed they could handle being down in games

In game two, the Pelicans took a 13 point lead in the first quarter, and with starters Steph Curry, Klay Thompson, and Draymond Green on the bench, it was the 33 year-old veteran Leandro Barbosa with his 12 points in the game who led the charge to give the team a one point lead going into halftime. Thompson and Curry took over in the second half, with the Splash Brothers amounting for 48 points total.

Game three saw the Warriors go down big again, this time needing a twenty-point comeback in the fourth quarter. Curry scored 40 points in the game including a ridiculous three-pointer in the final seconds of the game where he got trampled by two Pelicans’ defenders after he fired the shot. No foul was called on the play and the game went into overtime. The Warriors took control in the extra period and went on to win 124-119.

The Splash Brothers are awesome, but don’t forget about Draymond Green

MVP candidate Curry had a fantastic first-round series, averaging 33.7 points per game and Thompson was right behind him with 25 points per game. Both played huge roles and were able to take turns putting the team on their shoulders with the score close and the game on the line.

With these two players sharing the limelight, it’s easy to look past how big of a role Green had in the series. Averaging 12.8 rebounds per game and 2.5 steals per game, Green played a tremendous role on the defensive front. He also added 15.8 points per game, showing off his size and strength at both ends of the floor. Expect Green to play a large role in the next round as he will be asked to defend the opposing team’s top player, as he did against New Orleans’ Anthony Davis.

Game Plan For Next Series: Keep doing what’s been working

The Warriors will be hunted by whichever team they end up playing. It’s their job to stick to their game plan from the rest of the season. If the Warriors pass and shoot the way they have been doing it all year, I can’t imagine any team being able to beat Golden State in the second round. The Warriors will be well rested and they will have veteran forward David Lee back from a lower back injury.

Expect a lot of three-balls and for the Warriors to let Curry lead the way. He can dominate any team in the league with his shooting and when doubled teamed he always has an eye for an open teammate.

I expect the Warriors’ opponent to be the San Antonio Spurs, and Golden State will have to hope that their series with the Los Angeles Clippers goes the full seven games in order to make the winning team as tired as possible. While they have the advantage in experience, the Spurs are not as talented as they have been in past years and they aren’t getting any younger. The Warriors are too good to lose in the second round, but expect the series to be much more of a challenge than the first one.