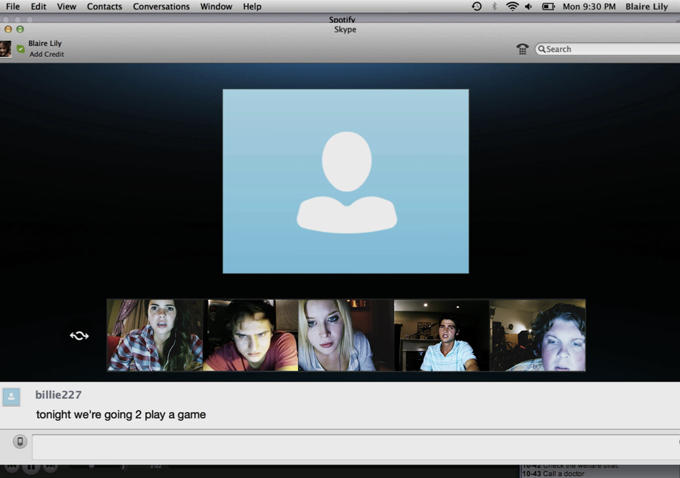 To be honest, I was planning to shit on this movie. It looked shitty, it sounded shitty, and given my jaded tendencies, I was expecting to have a shitty time. Right up through the film’s previews I cursed Nexustentialism for always assigning me these crappy movies to review. However, in the end, “Unfriended” actually managed to surprise me.

Don’t get me wrong, it was a shitty movie. It was silly and dumb and couldn’t scare anyone for a moment. The writing was awful. Hackneyed pussy-jokes and quips about partying made up almost all of the dialogue. Each character was plucked from a high school stereotype, and I begged them to die. The film revolves way too much around social media, and its overt critique of cyber bullying and teen suicide made me want to gouge my eyes out. And maybe it was just the booze I snuck in to soften the movie’s suck, but I found myself somewhat … interested in the piece of shit projected on-screen.

The entire movie consists of a rolling screen capture — edited in real time — of the laptop of some prissy valley girl with tits too big for anyone to believe she’s in high school. We watch her Skype with her equally annoying friends, look up YouTube videos and check her Facebook. At first, this style annoyed me to no end. It wasn’t until about 20 minutes in when I realized that the whole movie was going to be like this that I began to see a silver-lining of originality in an otherwise unoriginal work. It dawned on me that whoever wrote this movie is a genius. Not a creative genius, a financial genius. What producer wouldn’t want to pick up a movie this cheap to make? There were only five actors, no sets to build, and was entirely shot via webcam; this movie could have been filmed by a group of friends in one weekend. It’s ingenuity lay within its simplicity.

Unfortunately, simplicity was all it had. It was still a shitty movie and I wouldn’t recommend anybody spend their hard-earned weed-money seeing it in theaters. Simplicity does not alone guarantee quality or even entertainment. There are tons of fantastically simple films. “Glengarry Glen Ross”: two sets, a handful of actors — fucking genius, every second. “My Dinner with Andre”: two characters, one set — endlessly captivating, even though it’s nothing more than a plotless conversation between two guys over dinner. “Unfriended” was simple, although mildly interesting at best. Following the lead of the “Paranormal Activity” franchise, some producers set out to make a movie so cheap that even meager ticket sales generated by piss-poor internet hype could reap profit. This movie is junk food. It offers nothing, it has nothing and it is nothing. But at least we can marvel at how incredibly cheap it was to make. It’s the McDouble of film, and unless you’re fourteen at a slumber party and/or like to huff paint, I wouldn’t recommend it.

Kevin, this review transcended reality, it was so bloody awesome.