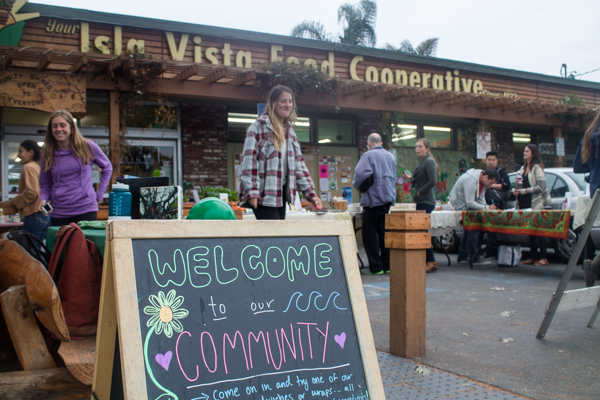 Community members gather at the Isla Vista Food Co-op to listen to a discussion on food sustainability and food justice. Paris Cullen/Daily Nexus

The Isla Vista Food Co-op and UCSB Environmental Affairs Board (EAB) hosted a community talk to discuss food sustainability at the Food Co-op on Tuesday night.

Three TEDxManhattan videos were presented at the talk, including “Why is Organic Food so *#@! Expensive?,” “How Ugly, Unloved Food Can Change the World” and “Cultivating Equality in the Food System.” Local guest speakers from I.V. were also featured and attendees received free coupons, cookbooks and snacks at the event.

According to Food Co-op Outreach & Education Coordinator Ashley Audycki, the event was held to prompt local discussion among university students and I.V. residents on sustainable food solutions and to allow individuals working on solutions to meet and exchange ideas.

Third-year biopsychology major and representative for the Merton cooperative house on Camino Pescadero Doan Ngo said she has a passion for food justice and for purchasing local, organic foods and has identified a way to do it.

“It all comes down to my conviction that eating organic and locally can have a prominent impact on our environment and economy,” Ngo said. “Before joining SB housing co-op and working at I.V. Food Co-op, I was aware of many food justice issues but failed to eat locally and organically with my very tight budget. I now believe that living cooperatively is the solution to make organic, local food financially sustainable.”

According to Ngo, as a shopper for Merton, she hopes to change her housemates’ routine of shopping for groceries based on price.

“I’m attending this talk is because I am currently a food shopper for our house, Merton Co-op, and I would like to deepen my understanding of the issue so that I can educate my housemates,” Ngo said. 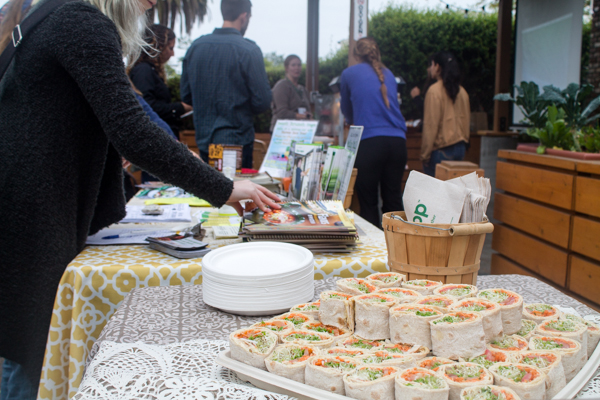 Ngo said she provides 18 people at the Merton House with organic foods for $100 per month to benefit the local economy as well as the environment which, according to her, is advantageous for multiple reasons.

“Sharing food with 18 other college students provide us the buying capital to support our local farmers and businesses while reducing food waste and carbon foot print,” Ngo said.

“The seeds for this project were really planted about five years ago by a group of students who saw that there was definitely an option for an alternative meal on campus that sought to launch a food cart that was student run,” Yang said.

According to Yang, students have voiced a need for more healthy and organic options on campus.

“We are hoping to really show both campus leaders and administrators — as well as other orgs — we could partner with that this is something students want,” Yang said. 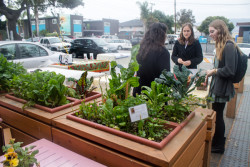 “There are two different things about Isla Vista that people don’t necessarily know about, and one is that there is a huge family population right here in I.V. and we serve over a thousand families a year,” Topitzer said. “We have a food distribution once a month that serves about 200 families a month as well as students — it is open to everybody.”

According to Topitzer, she works with the Cal Fresh program applications which provides food stamps to students and families, which are accepted at the Food Co-op, Costco, Farmers’ Market and Vons, among others.

“The idea behind it is to make it sound a little better, get rid of some of the stigma and just kind of change the face of that whole program,” Topitzer said. “Students who are eligible for work study or are working at least 20 hours per week are eligible.”

Fourth-year environmental studies major and chair of the Associated Students Food Bank Katie Freeze presented on how the Food Bank provides food to UCSB students and has been serving an increasing number of people since 2011.

“We have been doing a lot of work on food justice lately,” Freeze said. “Our need has been growing like crazy; we have served over 3,000 students. What we are trying to do now is to make our service more holistic. We are actually doing community outreach, providing educational resources to students as well as food to try and help them become self-sufficient in the future.”