The Daily Nexus
Tennis
Morgan Mays: Dedication From a Young Age
April 23, 2015 at 5:08 am by Daniel Moebus-Bowles 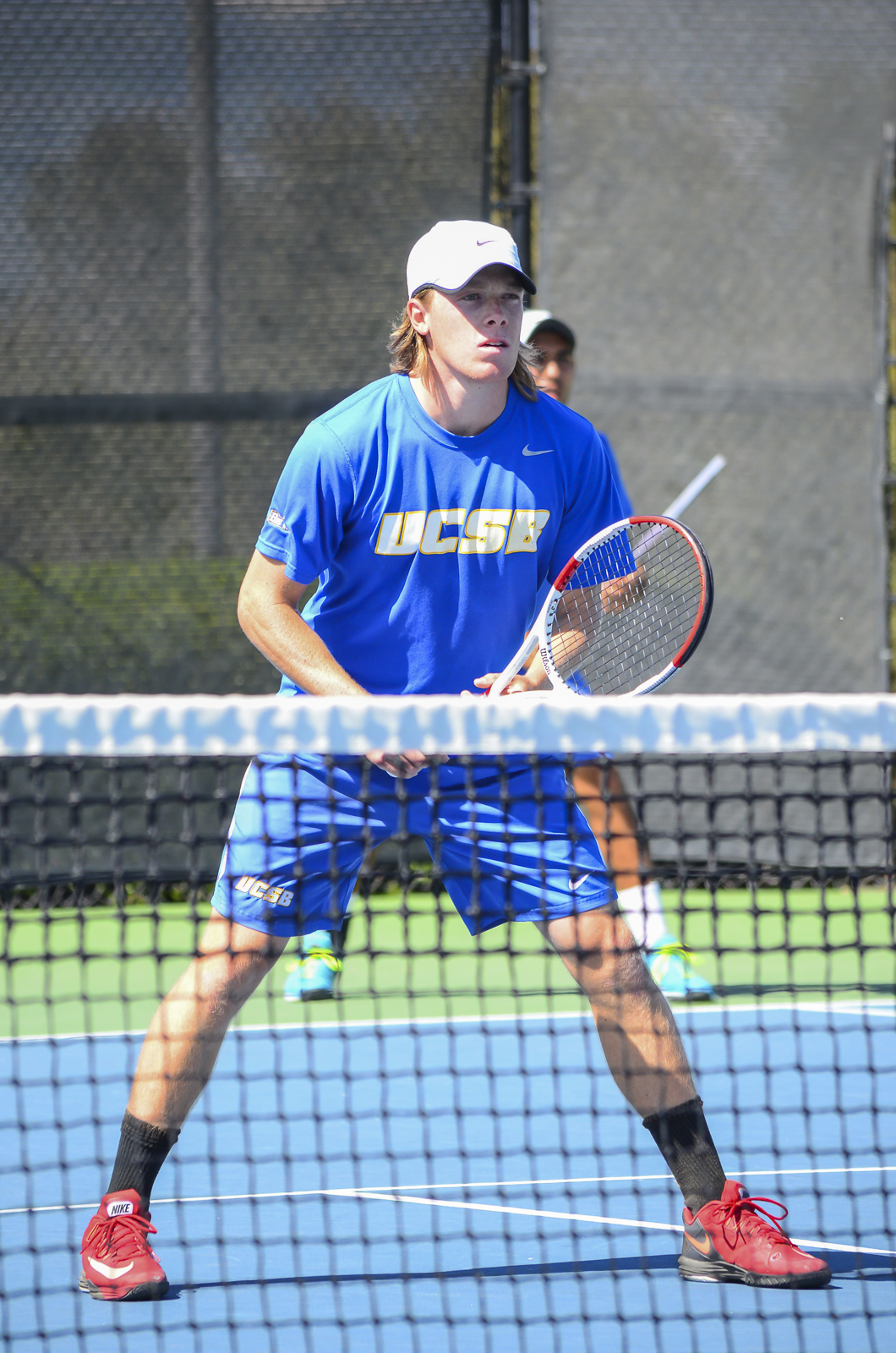 The journey of a serious athlete from the time that they are young to the time that they hit the real competitive field is quite arduous. It takes day in and day out dedication, work and determination to fully make a sport a life priority, and the demand employed by this lifestyle is not for everyone.

From the age of 10, this hard-hitting yet extremely rewarding journey has been the life of Morgan Mays, a red shirt sophomore on the UCSB men’s tennis team.

“That is really when I started to make tennis my focus,” Mays said. “I knew it was what I wanted to do and I really started working on my craft with a purpose.”

Being a tennis player does not involve the same path as, say, that of a football or basketball player, who would show what they could do by playing on a high school team. Top prospects in tennis gain their rankings and reputation from playing in tournaments and tours, so traveling year round is a necessity.

To make himself known, Mays had to be truly dedicated. He had to sacrifice attending a public high school, instead attending online to allow him to pursue his love of the sport.

Luckily, he was able to get a taste of the high school sports experience beforehand due to his undeniable talent. While in just the sixth grade, his first year of middle school, Mays earned a varsity letter competing for Trinity Preparatory High School.

He found homes in both Florida and California, so moving around all ends of the nation wasn’t unfamiliar. In Florida, he tacked on the accolade of being ranked No. 1 in the state for players 16 and under, and defended that rank with a victory in the Florida State Singles Championship.

As he traveled, Mays achieved such accomplishments as being labeled a 5-Star recruit, winning three ITF junior singles titles and an ITF junior doubles title. Along with that, he was ranked top-10 nationally throughout his entire junior career in his age group. As his game grew and progressed over this time, the idea of college life came closer and closer.

“When I was playing at a younger age I hadn’t really thought too much about college,” Mays said. “I was just trying to get better and hit the rankings, but when it came down to deciding on a school, I held education and tennis as my highest priorities.”

Mays decided to take his talents to Wake Forest University in North Carolina; a university which is well respected for both its academics and its tennis play. During his time there, the Demon Deacons sat in the top-20 of the rankings all season.

Mays posted a 9-5 overall singles record and helped contribute to a 6-4 stand in doubles play. He found his spot primarily around the fifth and sixth courts, which, although they weren’t the most glamorous spots, are still beyond impressive for a late addition freshman on highly-ranked ACC team.

“Wake Forest was definitely the right decision for me at that time,” Mays explained. “It was a really great and rare opportunity and I definitely enjoyed it. The academics were great, the people were very friendly, and the adjustment was pretty smooth. On top of that, they have a very successful tennis program and it was great playing in the ACC.”

Despite enjoying his time as a Deacon and contributing to their elite team, Mays had his sights set on other destinations to pursue success. He searched for a place with a chance to experience his own improvement as an individual while still contributing to the team.

“I think team success is great and it actually can strongly relate to individual success, so it is definitely important,” Mays said. “I experienced that at Wake Forest and now I was looking for fair opportunity to play higher up so I could have a chance to play in national circuits while still playing for a team.”

Being a California native, and perhaps a little worn out by the climate change of North Carolina, Mays wanted to return to the West Coast to compete on the court. UCSB presented itself as a strong competitor for his new destination as he still considered the option of returning to Wake Forest.

After learning of Santa Barbara’s divine Film and Media Studies program, which matched his interest of study, Mays decided to return to the Golden State, just miles from his home in Malibu.

“The college experience at Santa Barbara speaks for itself, the location speaks for itself and the academics speak for themselves too,” Mays said. “On top of that, the tennis program is very successful and [Head Coach Marty Davis] is a phenomenal coach that has helped many players climb to the next step in the sport.”

When Mays became a Gaucho just this past season, the opportunities that he had searched for came alive as he found himself playing around the top three spots and mostly holding down the number one spot for his team. He contributed to 11 doubles victories and posted a 13-7 singles record that featured a nine-match win streak.

Mays’ successes helped push Santa Barbara to a very successful season as the Gauchos climbed as high as No. 60 in the rankings and finished the regular season sitting at No. 62. With a 9-0 home record, they even made history by becoming the first UCSB men’s tennis team to go undefeated at home for the entire regular season.

“I’m so glad that I was able to come to this amazing school and help this program thrive,” Mays said.  “I love the team already and I think we have all of the tools to keep pushing and become a top-30 team in the nation. I would love to see that happen in my time here and hope our success keeps growing.”

Morgan Mays, a true competitor in the sport of tennis, has found a home at the University of California at Santa Barbara and will undoubtedly continue to strive for success as he always has in his career.

A version of this article appeared on page 11 of April 23, 2015’s print edition of the Daily Nexus.