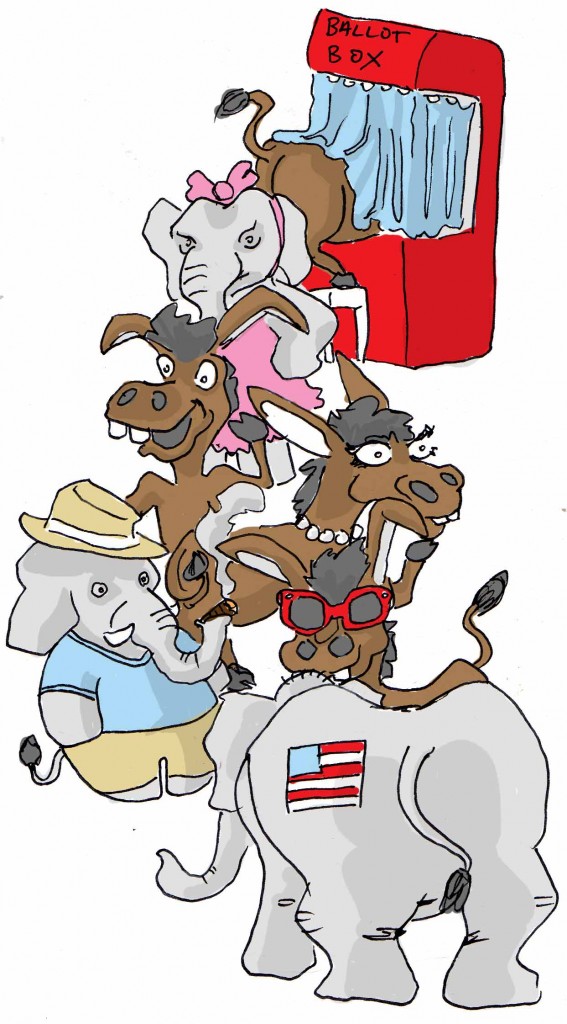 If there’s one thing young people love, it’s being didactically preached to about civic responsibility and the importance of voting. Stop any given 20 something you may pass on the street, inquire as to how he orshe feels about the constant onslaught of media coverage regarding this generation’s lack of political participation, and you’ll surely be met with smiles and perhaps a thumbs-up. The newspaper articles, the youtube campaigns, the punny t-shirts – keep it coming, because youngsters just can’t get enough of being told that as citizens of this great nation, it’s their duty to flock to the polls when election day rolls around.

Sensing a little sarcasm? If so, kudos to you. In general, young people don’t like being told what to do, and unfortunately this dislike grows even stronger where voting is concerned. And yet, my intention here is nothing other than convincing you to vote the very next chance you get. Today’s sad reality is that despite myriad efforts to bring this generation to the voting booths, there seems to be a serious shortage of people who will actually make the trip, even with the promise of an “I Voted” sticker hanging in the balance.

I try my best to be sympathetic. When I come across someone, as I too often do, who insists they have no intention of voting, I make every possible attempt to listen attentively and keep an open mind. But alas, I must confess – I don’t think there’s any legitimate reason not to vote. I’m aware this may be a divisive statement, but it’s one I’ve stuck by and will continue to uphold.

When it comes to staying home on that early November day, I’ve heard every excuse in the book, ranging from governmental disillusionment to unabashed laziness. Some of my fellow Golden State inhabitants claim that because we live in such a decidedly blue state, casting a vote for either party won’t make any kind of difference. This can be said by the resident of any state that remains unchanging in its political primary color, whether it be California or Kentucky. But where this belief falls short is anywhere outside of a presidential election. In local and statewide elections, for example, each vote really does matter. Think of some of the biggies, like Proposition 8, which, for a bleak period in this state’s history, outlawed gay marriage. That proposition had a large impact on a significant demographic, and was the result of votes cast by the general public. Votes have power.

What’s more, votes are relevant. The power that votes carry extends to each and every citizen of this country, not just to the serious-faced, suit-clad politicians constantly milling about on C-SPAN. The 2012 presidential election was the first one I was old enough to really follow and care about. I was a senior in high school, and more than mildly devastated to know that I would be just three months too young to cast my first vote in favor of Barack Obama. Even so, I tracked the news diligently, and watched each debate with avid and unwavering attention. One afternoon, after play rehearsal, I realized I had only 20 minutes to get home if I wanted to see the debate live, and began to throw various textbooks into my backpack with reckless abandon. Noticing my haste, a friend asked what all the fuss was about. I explained my reason for hurrying, and, to my shock and horror, he laughed. He told me that he didn’t understand how I could possibly be so invested in the election when politics as a whole were so entirely inapplicable to our lives. My friend firmly believed that his life would be the same no matter who stepped into the Oval Office next. Politics, as far as this friend was concerned, were for politicians, and politicians alone.

Whether we vote for a president knowing that he or she will make certain issues a priority, or on a proposition that deals with a specific issue, the outcome of our votes does impact our daily lives.

I’m not naive. I know that politics don’t always involve the purest of intentions, and that the good guy doesn’t always win. I know that some of the issues our country faced a decade ago still remain unsolved. I know that a single vote, or even a lot of votes, can’t change everything. But while I’m not naive, I am hopeful. I hope that when the next election day comes, you will march out the door with excitement, and exercise the right for which so many others fought so very hard. I hope you know that what you mark on your ballot is important. More than anything, I hope that even if altering history by partaking in an elaborate and fascinating political system isn’t enough for you, you’ll do it for the sticker.

Hooray! You are so right.