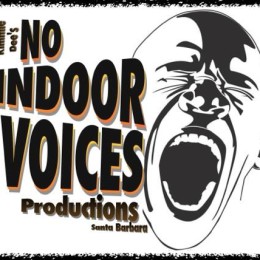 Brazilian restaurants, punching bags and dildo-related humor. Besides their affiliation with serious action, what do these things all have in common? They were all found at last Saturday night’s comedy show by “Kimmie Dee’s No Indoor Voices” at the Brazilian Arts Café. With “Stand Up Comedy with Pride!” as the night’s theme, comics from all over the nation gathered in downtown Santa Barbara to share their love for comedy and their support for the LGBTQ community.

The show took place in a cozy room in the back of the restaurant, a hidden room that you wouldn’t find unless you were looking for it. It’s a capoeira studio by day, comedy lounge by night. Seats filled quickly and authentic Brazilian juices were in hand of the predominantly lesbian audience.

Casey Ley brought San Francisco pride to the stage and gave us a taste of that unadulterated humor we’ve heard at SF Sketchfest and “This Feels Wrong.” What was his first impression of our suburban city of Santa Barbara? Let’s just say he was thoroughly impressed with a certain collection of high-end bong art (Fuzion Glass Gallery is a Santa Barbara treasure). He also shared stories of his contempt for working in retail as a grown man (but not before warning the kids in the crowd about glory holes).

Following Ley was none other than the event-coordinator herself, Kimmie Dee. Her Jersey accent came shining through as she gave us her uncensored opinion on social and political issues. She spoke on the recent controversy over Indiana’s “religious freedom” law, which would be amended to allow religious business owners to refuse service to homosexual consumers. According to Dee, gay people typically “mind their own business.” Religious groups? Not so much.

Comedian Sarah Hyland brought her Kentucky charm that has graced shows like MTV’s “Punk’d.” We all lie about our weight and Hyland is no different. She says that she struggled with major body issues as a child and “told people that [she] was born as a two-pound baby.”

It was a night of embarrassing stories, sexual innuendos and socially-conscious speeches. No Indoor Voices brought together four talented, openly queer comedians to create a night of entertainment which addressed topics that often go unacknowledged in our community.

Wow! Thank you! Not only do I appreciate the support of having you in the audience, but YOU GET IT!
I look forward to meeting you. (Sorry I missed you that night, needless to say, I had my hands full.)
Great writing by the way, not because it’s about us, but you’re a great writer and have restored my faith in journalists. Please keep writing!
Best,
Kimmie Dee