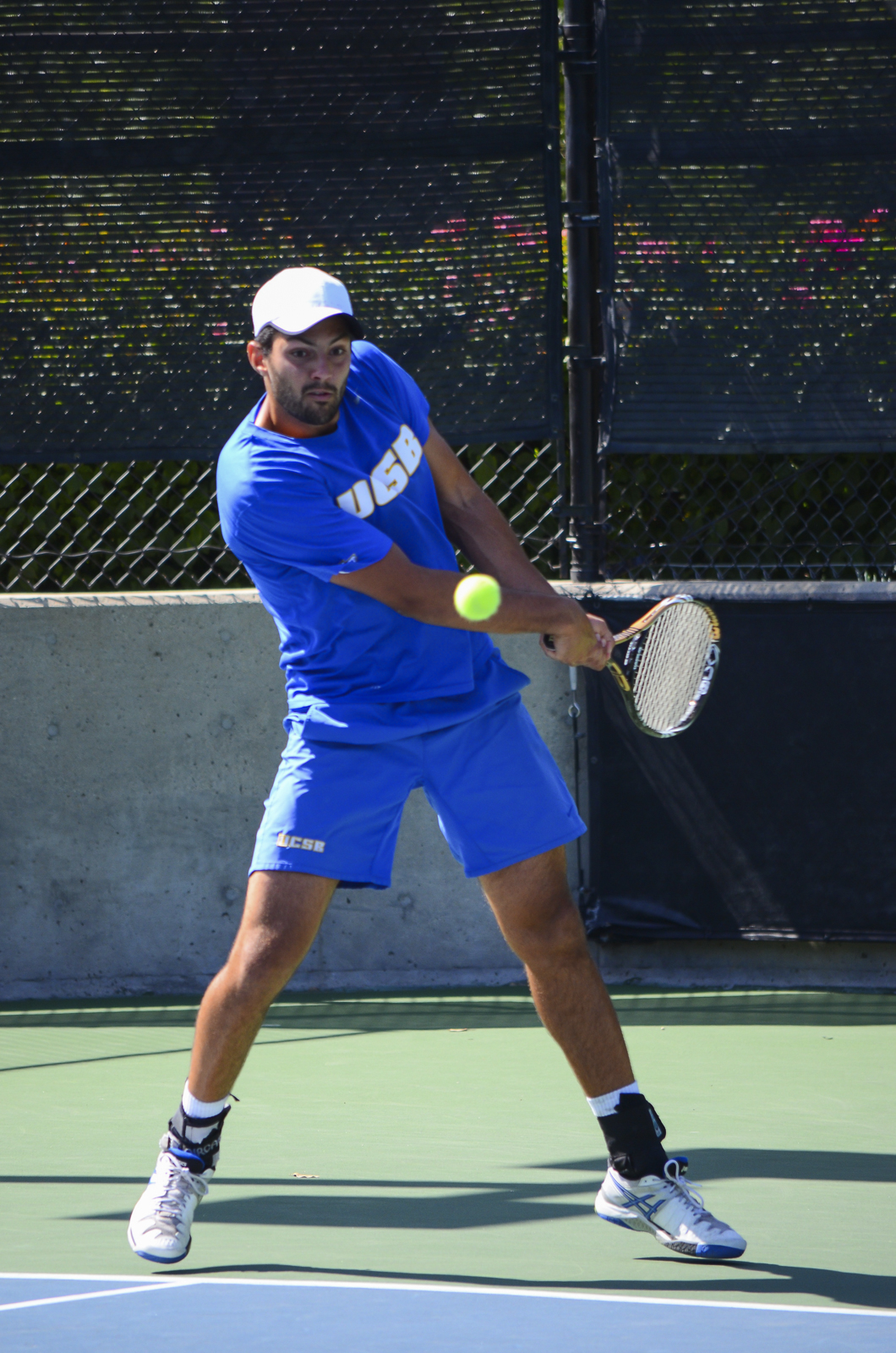 ​This past Saturday, the No. 70 UCSB men’s tennis team made history when it defeated No. 50 Cal Poly in its last regular season match of the year. The Gauchos took a one-sided 6-1 victory to go undefeated at home this year and become the first team in school history to do so.

​With this victory, the Gauchos capped off their season with an overall record of 12-9 and 3-2 in the Big West conference.

Adding to the excitement of the Blue-Green rivalry match was the fact that it was also Senior Day. Seniors Ziad Sultan and Tobias Galskov were honored as they played in their last match in Santa Barbara.

​“A day like today just brought everything full circle,” Sultan said. “Coming out and making history, and to do it against a team like Cal Poly was just the icing on the cake, and it feels great.”

​The match was exciting from the first serve in doubles play as all three matches had multiple lead changes. The Gauchos dropped the first on court one giving the Mustangs the edge, needing just one more win to clinch.

The duo of red shirt sophomore Morgan Mays and junior Andrew Riminton found themselves down 4-1 to start off on court three and battled their way back to force a tie breaker. They kept the doubles point alive winning six of the last seven sets for a 7-5 victory. The team of junior Nathan Eshmade and sophomore Erik Johnsson secured the doubles point in similar fashion, winning 7-5 on court two.

​The Gauchos took the singles matches by storm winning five of the six total matches, but the score doesn’t do justice to how close the match was. Three sets went to a tie breaker and two matches went down to the third set.

Sophomore Teague Hamilton was the first to finish for his team winning in straight sets 6-1, 6-2, on court six. Freshman Cody Rakela was the next to go with his quick victory of 6-3, 6-4, to put the Gauchos up 3-0, just one match away from making history.

​Eshmade was defeated on court two in straight sets by Garrett Auproux, giving Cal Poly its first point of the match. Galskov and Johnsson each won their first sets, but lost in the second set to keep the Mustangs in it.

As these two matches entered the third set, Mays looked to close out the match in the second on court three after taking the first set in an intense 7-6 battle.

​Mays was faced with the tough challenge of Poly’s 6’5 Corey Pang, who covers the front of the net, but still found a way to fire returns past him. Mays took the second set 6-3 and his teammates rushed the court as he sealed their spot in history. With a score of 4-1, and wins from Galskov and Johnsson to follow, the Gauchos improved to 9-0 at home.

​“This is a match that I think we really needed to win,” Head Coach Marty Davis said. “All the guys who won today are going to have confidence heading in the Big West Tournament.”

​The team’s season is not over yet as UCSB will head to Indian Wells next week for the Big West Conference Tournament.