The Daily Nexus
Spoken Word and Poetry
An Evening of Spoken Word: Beau Sia
April 20, 2015 at 12:11 pm by Janel Mendoza 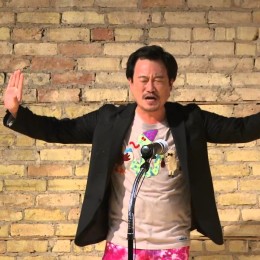 Beau Sia, renowned Asian-American slam poet, casually leaned against the silver 2008 Mercedes-Benz as his audience members nonchalantly walked by. Removing his heart-shaped sunglasses, he revealed himself and asked each group to think about and write down their idea or interpretation of love on a piece of paper — in the form of a word, phrase or question. After scribbling down their initial thoughts, people dropped the pieces of paper into a glass bowl. The theme of the night would be love.

Before Sia was formally introduced, spoken word performer and UCSB professor Kip Fulbeck invited three students to perform poems they created whilst in his Introduction to Spoken Word class. The crowd turned their attention away from the colorful three-dimensional art pieces hanging on the walls to the stage that was accentuated by a cement arch.

In a humorous poem about Brazilian stereotypes, UCSB student Raphaella Faria satirized the presumption that all Brazilians get waxes and live and breathe soccer. “We’re not born into families. We’re born into teams,” she said while enthusiastically sambaing across the room and aimlessly kicking a soccer ball to embody the common misconceptions about Brazilians.

In his highly descriptive throwback poem, Adrian Lara reminisced his high school glory days. From the first “Down! Set! Hut” to the final touchdown, Lara articulated his first and successful experience with the football. “It was the best time of my life,” the former football player admitted.

Stepping up to the mic next, UCSB senior Justin Kyung performed a piece called “The Holy Trinity.” Kyung, acknowledged for his honesty, listed and explained three essential parts of his identity — being Korean, Christian and gay. Through his self-exploration piece, Kyung set the mood for more poetry about individuality and love.

The opening acts came to a close and commotion inhabited the coffee house. DJ Tempest played transition tunes as Sia shimmied his way to the microphone. “Poetry isn’t just about words. There’s poetry in this body right now,” the author howled as he seductively and hilariously unraveled his tan trench coat.

In hot pink tie-dye pants, a gray graphic tee and leather oxfords to match, the vibrant artist performed popular poems from his newly released book, The Undisputed Greatest Writer of All Time.

At the end of his first piece, Sia apologized to the front rows, “I’m sorry if spit comes out of my mouth. Just know that sh*t is holy.” Reading directly from his recently published book, Sia then passionately performed “So You’re Not Into Asians.” He advised that, “You should not carry shame for what your heart tells you. Human beings develop their heart better without fear and guilt.”

Apologizing once again for the excess saliva that came with his p-p-p-poetry, Sia reminded a possibly wet audience member, “It’s holy, my brotha! It’s holy!”

The poet then asked the crowd to recall their first activity of the night: contemplating love. An audience member carried the glass bowl of thoughts and questions to Sia on stage as her friends cheered, “Go Emily! Bring that bowl!”

“Each one I pick, I’m going to improvise a poem based on what I read,” the performer explained. “Guess what? It might suck,” he jokingly warned. The coffee house shouted in support. The next half hour was filled with unpracticed and completely genuine poetry. “F*ck it. Let’s get vulnerable,” Sia said as he rubbed his cheeks, shrugged his shoulders and began to ad-lib.

Of the many pieces of paper he could have picked, the nervous but eager poet chose three.

The first read “I love turtles” so Sia did his best to recall all that he knew of turtles and profoundly described the creatures to be “[watchers] of the world, [ones] that will take this knowledge on, when all of this has passed us.”

The next paper was blank so the pensive writer titled it, “Nothing.” His last line, he admitted, was melodramatic and read, “It is the quiet that gives us the gift of fullness.”

The last asked a question, “How do I step up my game with the ladies?” He told the audience to choose between a poetic or direct response. Surprisingly, the caffeine-filled audience voted for a direct answer. Following this majority decision, Sia called out, “Be honest about who you are and your intentions. When you’re 95, you can say that sh*t. I’m 95,” the 39-year old poet comically said.

To add to the theme of love, Sia shared poems that he wrote at the age of 15. He clarified that this decision was a therapeutic one; his younger self needed the spotlight too.

From his unique shades and full-grown ‘stache to his powerfully-written works and impressive on-the-spot poetry, Sia certainly connected with the audience through intensity, laughter and literature. The world-renowned poet will be sure to come back soon. But, if you can’t wait until then, he promises “daily inspirational haikus on [his] Twitter feed,” good reads in his new book, The Undisputed Best Writer of All Time and even better updates on his website beausia.com.

Until then, Sia soon.