The Daily Nexus
News
A.S. Senate Dives Into Divestment
April 16, 2015 at 5:00 am by Noah Brennan-Greenbaum 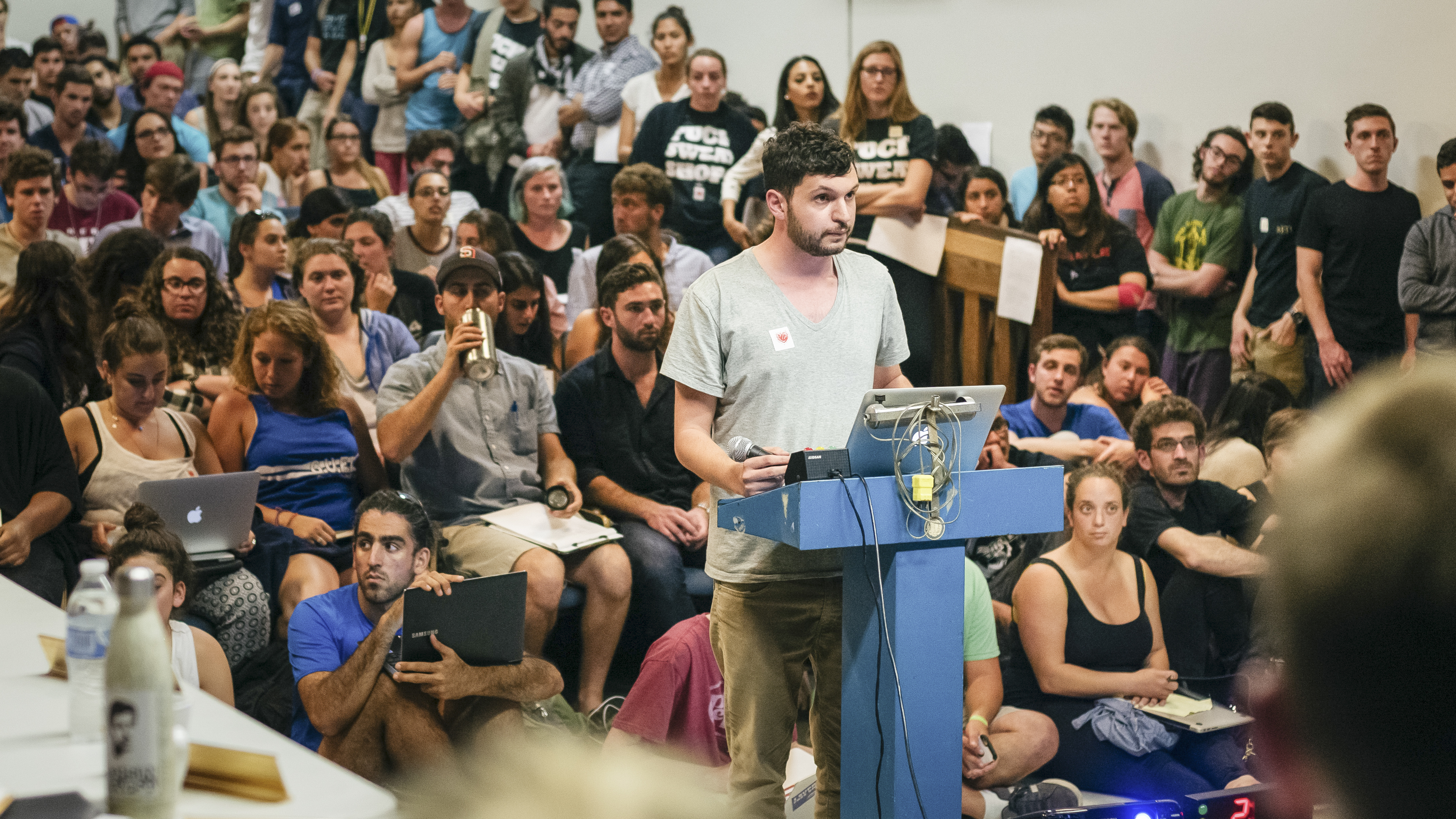 Impassioned students joined the A.S. Senate in the Old Little Theater and Girvetz 1004, making speeches to the senators concerning the Students for Justice in Palestine’s recent resolution. Hari Patel/Daily Nexus

The Associated Students Senate met Wednesday night in the Old Little Theater and then in Girvetz 1004 to discuss a resolution by Students for Justice in Palestine (SJP), sponsored by senators Xin Ma and Steven Kwok, which calls for the university to divest from businesses profiting from alleged human rights violations in Palestine.

Dozens of students signed up to speak during public forum, giving passionate arguments both in support and in opposition of the resolution. UCSB and UC Merced remain the only UC undergraduate campuses whose student governments have not yet passed divestment resolutions, with UC Irvine being the first campus to pass divestment in November 2012.

“This resolution never took into account that boycotting businesses affects business decisions that hurt the Palestinians as much if not more than the Israeli economy. Hewlett-Packard, one of the companies on the boycott list, employees hundreds of Palestinians engineers and other people in the technology industry.” – Second-year economics and accounting major Michael Torbati

Sociology graduate student Emily Schneider said students should stand in opposition to the corporations profiting from human rights violations currently being committed via the Israeli-Palestinian conflict.

“The problem there is not so much about religion, or other things that we see in the media, but the fact that there’s companies over there profiting off of the cycle of violence and we have the chance here as students to play a role in ending the cycle of violence for both Israelis and Palestinians,” Schneider said.

“The demands that BDS calls for amount to the destruction of Israel it’s as simple as that,” Lifton said. “The generally agreed upon solution to this conflict is a peaceful two-state solution. I want peace; I want an Israeli state, and I want a Palestinian state.”

First-year global studies major Marjan Abubu said he is in support of the resolution and called on Senate to stand up on behalf of people oppressed by corporations named in the resolution.

“We have the power to voice our opinions therefore we must speak out for those who cannot,” Abubu said. “Our unified voices cry out to denounce corporations that profit from cruelty and brutality.”

Second-year economics and accounting major Michael Torbati said the resolution is an attack on Israel and may have unintended consequences.

“Israeli existence is questioned daily. No other nation has to deal with the constant threat of annihilation from multiple fronts. It may not seem like it, but we are standing at one of these fronts right now,” Torbati said. “This resolution never took into account that boycotting businesses affects business decisions that hurt the Palestinians as much if not more than the Israeli economy. Hewlett-Packard, one of the companies on the boycott list, employees hundreds of Palestinians engineers and other people in the technology industry.”

I saw most of you running for platforms advocating for campus and social change. You all stand at a crossroads of continuing a tradition of activism and social justice that is the very reason that many of you can sit at these seats today. – Second-year math major Alonso Martinez

First-year biology major Michelle May said if the resolution were passed, it would alienate the campus’s large Jewish student population.

“UCSB has the largest Jewish population of any UC, therefore clearly the Jewish community feels comfortable being here and discussing that they are Jewish,” May said.

“This resolution alienates the Jewish community. There is no reason to pass a resolution that diminishes the happiness of such a large student population.”

Second-year math major Alonso Martinez encouraged the Senate to pass the divestment resolution near the end of public forum by putting the BDS movement into the historical context of past social justice struggles.

“As George William, a German philosopher once said, ‘The only thing we learn from history is that we learn nothing from history.’ Will you be the Senators that prove him wrong?” Martinez asked.

Martinez said the opportunity to pass the divestment resolution was in the tradition of past student-initiated changes such as Black Student Union’s call for changes to the ethnic studies program to accurately reflect the UC demographic and protests against UC complicity with the Vietnam War.

“I saw most of you running for platforms advocating for campus and social change,” Martinez said. “You all stand at a crossroads of continuing a tradition of activism and social justice that is the very reason that many of you can sit at these seats today.”

As of press time, no vote had been made on the resolution.

A version of this article appeared on the page 6 of Thursday, April 16, 2015’s print edition of the Daily Nexus.