The Daily Nexus
Opinion
Is Coachella for Everyone?
April 15, 2015 at 6:00 am by Katherine Anderson 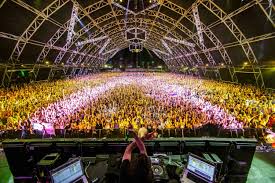 Coachella. It’s the word on everybody’s lips in the month of April. “Are you going to Coachella? What are you wearing? Who are you going with? Where are you staying? VIP or General Admission?” YouTube is offering live streams, H&M has produced a Coachella line. Stores like PacSun, American Eagle and Tilly’s are pushing “festival style” clothing. All the stars are attending. Even if you aren’t going, there are copious “NO-Chella” or “Too Poor to Afford Coachella” parties. You literally can’t escape the Coachella infestation.

Growing up in NorCal, I had no idea that Coachella even existed, or really that music festivals in general happened. People around me were into country music and I was pretty much on my own to find artists that I liked. I shudder to think of it, but my first concert was Ke$ha. KE$HA. (I know, I know.) It was a musical low. However, as I grew up, my musical taste grew with me and I realized I liked indie music and weird bands the majority of my friends didn’t know of. This interest in music bloomed in college as I met people who shared my taste. These individuals were the ones who first informed me of the magical place in the desert where hundreds of these artists flocked each year to play under the melting sun. Coachella seemed like a dream. To me and countless other die-hard music lovers, this was the place to go every year to see your favorite artists as well as new performers, and to be in a beautiful and magical place with thousands of people who are just as stoked to be there. The best part about being at a concert, in my opinion, is that moment when you are screaming the lines to your favorite song and you look over and someone catches your eye while screaming the same lyrics at the top of their lungs. There is an unspoken connection with someone who shares the same passion for the music that you love. It is inexplicable, but wonderful. Coachella takes that feeling and amplifies it into a weekend of ecstasy shared by thousands and thousands of people. However, the festival was not always the worldwide attraction that it is today.

Coachella started out small and almost failed at first. The festival skipped a year in 2000 due to low ticket sales and lack of a profit. However, with a bit of effort and a change in dates to from October to April, the festival was able to regain its strength and continue thriving. Over the next 10-or-so years, it went through a series of growth spurts until it became the phenomenon you see today. I mean, last year Justin Bieber showed up as a guest and this year Drake and AC/DC are playing! The festival is officially no longer the small indie-rock, Woodstock-esque event it was a decade ago.

As a freshman, I didn’t really know how big of a deal the festival was. My freshman year roommate and I bought tickets a few weeks before and went to the festival without any real plans or expectations. We crashed in a vague mutual friend’s campsite under a tarp and lived off PB&Js and Goldfish. However, the weekend was, to this day, the best weekend of my life. I was in it for the music and my roommate was in it for the fun and the Sahara tent. It was a potentially difficult dynamic, but it worked well. In my opinion, there is no reason to be bitter or resentful over people who are attending music festivals just for the fun. That’s what they are: fun. The way I see it is, I will get more out of the concert if I love the music and it has meaning for me. However, I think it is selfish to scorn the people who are attending the festival on a whim, without much concern for the lineup. Coachella has become more than just a music festival. It is a show. A giant, colossal circus filled with painted people, colorful structures and weed. You would be lying if you said you were going to Coachella just for the music. You go to Coachella for the Coachella experience. No matter how much you deny it, being able to go to Coachella is a declaration of status — both financial and social. It has become the ultimate “cool” place to be. Countless stars attend, and it is a fashion hub with thousands of attendees planning their outfits for months before the festival. The festival culture has officially become hugely commercialized. Gone are the days where only the hippies and the artists go to music festivals. It has become something that appeals to a greater part of the population and subsequently this “cool” event has exploded into the “mainstream.” It is like when your favorite band all of a sudden is on every radio station. You can be bitter about it at first, but after a while you have to sit back and appreciate and support their success. I say let the public enjoy Coachella. It is an unreal experience that everyone deserves to have. Yeah, everyone who is going might not know every song of your favorite bands in attendance, but they will be there enjoying the music with you. What is so wrong about that?