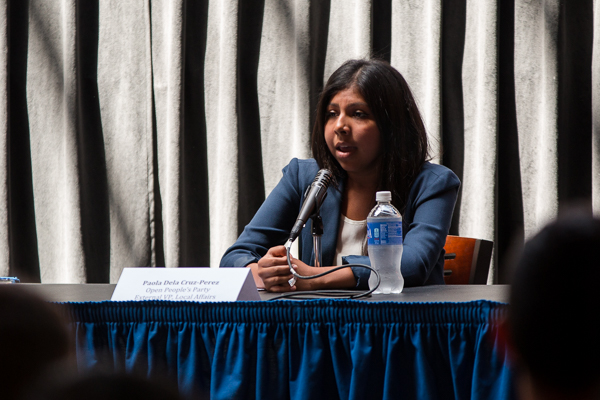 Candidates for the position of Associated Students External Vice President of Local Affairs (EVPLA) met in the Hub Tuesday afternoon to answer questions from students about their ideas, plans and credentials regarding their A.S. executive candidacy.

Second-year history of public policy major Paola Dela Cruz from Open People’s Party (OPP) and third-year political science major Brandon Morse from Free Thinking Patriots (FTP) are running for EVPLA. The office of EVPLA primarily concerns university and student relations with Isla Vista and the surrounding areas. The EVPLA office negotiates with campus administration regarding parking for Halloween and Deltopia, consults with local law enforcement agencies and distributes important information regarding I.V. and its surrounding areas to the campus community. In a 50-minute debate, the candidates for EVPLA were asked questions about what issues they would address and how they would address them if elected.

One of the issues brought up during the EVPLA debate was student housing, particularly the high cost of living in I.V.

This used to be an activist community until the ’70s when Reagan came in and pretty much crushed that spirit. I think that we should foster that activism spirit once again. – Brandon Morse of the Free Thinking Patriots (FTP) Party 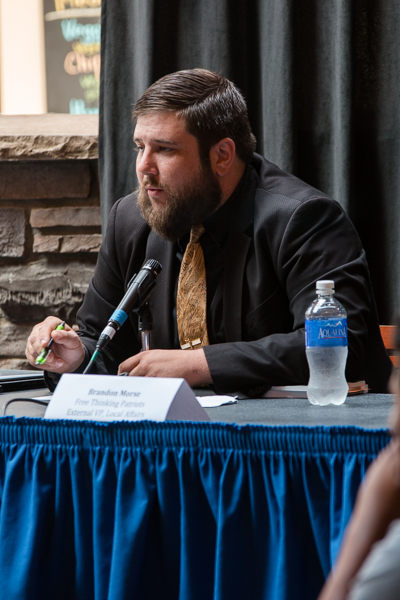 Brandon Morse tells the story of how he managed to get by without adequate housing. Stephen Manga/Daily Nexus

Morse said he was a homeless student during his first quarter at UCSB, and said he supports increased university housing.

“My first quarter here at UCSB I spent sleeping under park benches and in different people’s houses because it wasn’t affordable even for myself,” Morse said. “I am now living in student housing, and I think the fact that UCSB is expanding student housing is an excellent step in the right direction.”

Dela Cruz said she would pursue implementing temporary housing for homeless students if elected to the EVPLA office.

“One way I am going to address the Isla Vista housing crisis is by creating temporary housing on campus that is available to all students,” Dela Cruz said. “This would give international students and regular students someplace to live instead of sleeping on couches or in cars.”

Addressing concerns of representation of students of color, both candidates said they had extensive experience dealing with the issue.

“Throughout my two years at UCSB, I have worked hard to ensure that students of color are represented in every space that I am in,” Dela Cruz said. “As a senator this year, I have created a temporary committee to create a housing application grant that would alleviate the need of students who cannot afford housing applications.”

Morse said he has been involved in discussions with many community groups about issues that affect minorities.

I believe that our community needs self-governance in Isla Vista. This is something we have been pushing for years because the county is continuing to underserve our community. – Paola Dela Cruz of the Open People’s Party (OPP)

Answering a question about Assemblymember Das Williams’ self-governance bill AB-3, Dela Cruz said she was a strong proponent of the legislation.

“Since the very first day that Assembly Bill 3 was introduced, I have been part of the dialogues and meetings that have taken place in our local community,” Dela Cruz said. “I am in full support of this bill. I believe that our community needs self-governance in Isla Vista. This is something we have been pushing for years because the county is continuing to underserve our community.”

According to Morse, the structural changes outlined by AB-3 are not enough to incite change in I.V.

“I think it is a step in the right direction, but it doesn’t do nearly enough,” Morse said. “I think that it’s a way to appease the students at this particular point in time. What we really need is representation, and the way that we get representation is through cityhood, not through the current structure.”

In regard to addressing rape culture on campus, Dela Cruz said there have been a lack of programs to educate students about sexual violence at the university and in I.V.

Morse said he wants to bring back the activism culture of I.V. in the ’60s and channel efforts toward anti-rape culture.

“This used to be an activist community until the ’70s when Reagan came in and pretty much crushed that spirit,” Morse said. “I think that we should foster that activism spirit once again.” 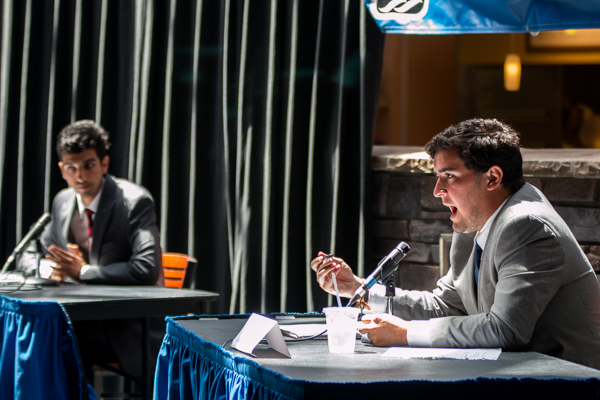 The EVPSA office is authorized to advocate for students primarily on the state, system-wide and national levels. The candidates for EVPSA answered questions which focused on advocating for students’ interests on the state level, discussing funding issues within the UC and collaboration with the University of California Student Association (UCSA).

If we work more closely with others working for the same goals as us across the state, we can be far more effective than when we meet just once a month for a board meeting. – Independent Candidate Mohsin Mirza

Mirza said he would work with existing lobby groups to pressure the state government to increase funding for the UC and push the UC system to slow growth spending.

“I have been working within the association’s Lobby Corps and also in a number of clubs and OSL groups, and I feel like engaging with them will be one of the most important things I can do if elected,” Mirza said.

Lopez said educating UC students and California residents is the best way to create change in the UC system.

“I believe the most effective way we can fight back against cutbacks in our system and raises in tuition is to advocate for average students to know what’s going on, because when average students understand the systems that affect them and the ways that they affect them, their parents and friends will understand,” Lopez said.

Referring to UCSA meetings, Mirza said A.S should be working with UCSA members throughout the year rather than once a month on issues facing higher education across the state.

“If we work more closely with others working for the same goals as us across the state, we can be far more effective than when we meet just once a month for a board meeting,” Mirza said.

Lopez said he would make an effort to involve students in UC Regents meetings and student conferences if elected to office.

“If I am elected as EVPSA, every time that we go to a conference I am going to put a priority on students that have never been to one,” Lopez said. “When we have a critical mass of students who understand the issues that face them, that’s when we can advocate for real systematic change.”

Debates for other A.S. positions will continue on Wednesday and Thursday in the Hub. Elections will take place April 20-23 on GOLD.

Stop reporting ‘rape culture’ and other bigoted feminist nonsense as fact. Do your homework on feminist falsehood, fraud and misrepresentation or join the Rolling Stones crew as imposters.

I wonder if you think that anybody’s going to honestly take you seriously, especially with that username. No, really, I’m genuinely curious.