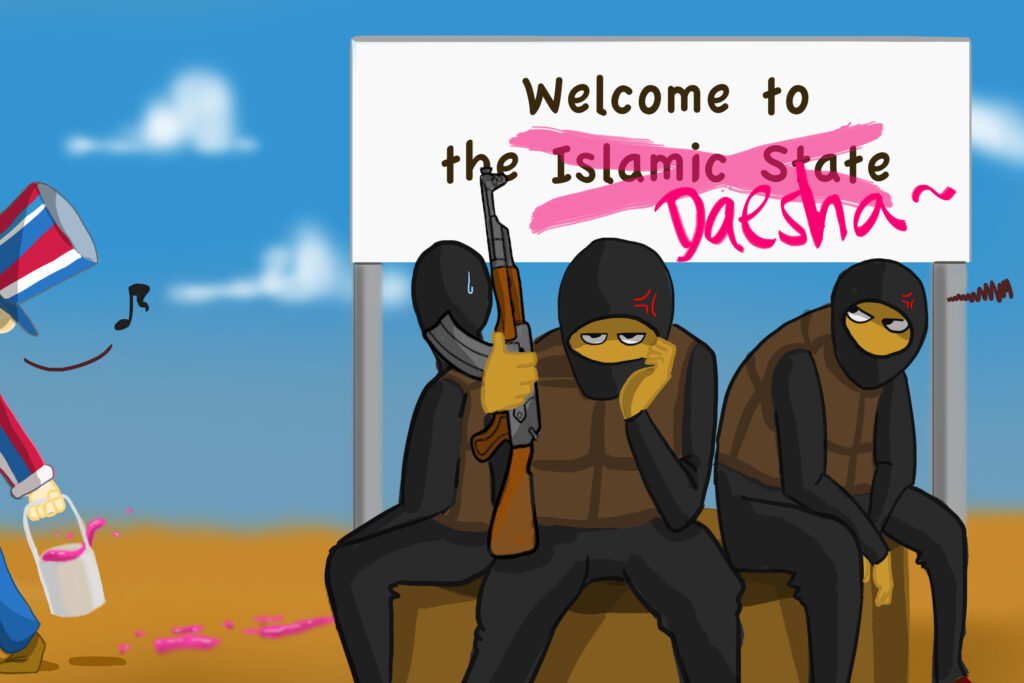 When a group of militants captured swaths of territory in Iraq and Syria last June, journalists and public figures employed a common vocabulary to document the events. Words like, “assault,” “brutality,” “extremist” and “terror” peppered press releases and news articles with identical language. The parallel locution conveyed a unified message: universal condemnation of the illegitimate combatants.

Despite alignment in word choice and repudiation, a key detail of the story eluded consistent address. No one knew quite what to call the surging combatants. Prior to 2007, the militants operated as a loosely affiliated branch of al-Qaeda called “al-Qaeda in Iraq” (AQI). After al-Qaeda disassociated with the group for being too extreme (yes, seriously), AQI changed its name to “Islamic State in Iraq.” The organization expanded operation to neighboring Syria in 2013, adopting the name “Islamic State in Iraq and Syria” (ISIS) to reflect their new territory.

When the radical combatants gained national attention in 2014, politicians and media largely referred to thegroup as, “ISIS.” As the conflict wore on, however, the organization’s nomenclature continued to evolve. In addresses to the media, the Obama administration began to use the acronym, “ISIL,” substituting the word “Syria” for “Levant” in an attempt to more accurately translate the group’s Arabic name. To further complicate matters, militant leadership rebranded the organization once again, announcing in a video that they should now be referred to simply as “The Islamic State” (IS).

The terror group’s constant identity crises delighted rhetoricians. Speechwriters and journalists bounced between acronyms and full titles, employing all three of the group’s designations depending on which name fit their sentence structure best. All of the terms effectively referred to the organization, so why would it matter which title a writer chose?

In September, however, the French government challenged the practice of using any of the names at all. Foreign Minister Laurent Fabius announced that he would now refer to the organization solely as“Daesh,” an already familiar title to the Arab world, but one that was foreign to most Americans and Europeans. Secretary of State John Kerry, Australian Prime Minister Tony Abbot and various global media publications adopted the term soon after.

Adding another, lesser-known name to the mix may seem unnecessary or confusing, but closer consideration of Daesh’s tactics suggests that the group’s self-proclaimed names possess insidious power. Each variant of the organization’s preferred title acts as a deliberate, powerful piece of rhetoric all on its own – part of a concerted effort to represent something the group is not.

Since the start of its bloody conquest, Daesh has employed an impressive propaganda machine to construct a particular image. The organization’s ability to dispense a powerful, cohesive message is central to maintaining the international support network that makes it so strong. The name, “Islamic State,” is a key selling point for this carefully crafted brand.

The title refers to the group’s stated goal: to establish and rule over a united Islamic state, or “caliphate.” By using “IS” in their title, Daesh claims to represent a legitimate governing body. The name credits the organization with undue deference; the militants ruling over stolen land in Iraq and Syria fall far short of the conventions for statehood.

Using the group’s preferred title helps spread the illusion that a group of radical militants deserves international recognition. Simply claiming statehood does not earn violent subjugators the rights of a state. Referring to Daesh as such is both inaccurate and empowering to their message.

The organization’s use of the term, “Islamic” poses similar representative issues. While Daesh does practice a radical, literalist interpretation of Islam, the group does not typify the Muslim community. Last June, Daesh propagandists demanded that Muslims worldwide pledge allegiance to their newly formed “state.” Islamic leaders around the world condemned and refused the call to action, but fear the residual effects of a religion held hostage.

Adopting the term “Daesh” allows the international community to disengage the damaging implications of “Islamic State.”

Daesh’s claim to represent all Muslims fuels Islamophobia and sows the seeds of domestic distrust. The organization wants Western society to shun Islam: it fits the “us vs them” narrative that the group uses to radicalize young people. Referring to Daesh as “Islamic” fuels the same hatred that fills their ranks, while alienating the members of a faith who oppose their actions.

Adopting the term “Daesh” allows the international community to disengage the damaging implications of “Islamic State.” The title, already widely used in Middle-Eastern nations, is actually just another acronym. “ISIS” translates to “DAESH” in Arabic. The term carries a very different connotation, however, because the Arabic language makes rare use of acronyms.

“Arabophones are not as used to hearing [acronyms] as Anglophones are,” translator Alice Guthrie explains on her blog. “Thus, the creation and use of a title that stands out as a nonsense neologism for an organization like this is inherently funny, disrespectful and ultimately threatening of theorganization’s status.”

Reducing the group’s lengthy title to six letters is more than a matter of abbreviation. The name is a patent sign of disrespect – funny sounding gibberish to the ears of the so-called “Islamic State.” In the Arab world, “Daesh” has transformed into a word of its own, punctuated like a normal name and standing for nothing more than the scorn of its speaker. The term replaces the troubling implications of a propaganda-laced title with a lingual slight that derides its very subject.

If the term’s symbolic utility doesn’t persuade you, perhaps you’ll use it just to spite the radical organization. Residents of Mosul tell The Associated Press that Daesh threatens to cut out the tongue of anyone who uses the name in public. For a group that so carefully guards their image, the disrespect that “Daesh” implies is infuriating.

It’s fitting that a silly sounding word has such a profound impact on an organization committed to megalomania andillusions of grandeur. In defiance of their assault rifles and explosives, a simple change in title can belittle Daesh and dismantle a key mechanism of their propaganda.

The name wrests the power of language away from the militants and back into our hands. It replaces a misrepresentative title with one that’s better suited. A nonsense name befits a nonsense movement.

One thing we do know is the name means little and what really matters is that these Muslims are intent on fulfilling Islam’s goal of building a worldwide caliphate just as Mohammed set out to do 1,400 years ago.

I’m curious; do you have any semblance of a life beyond springing to the chance to whine about Muslims on a college news website?