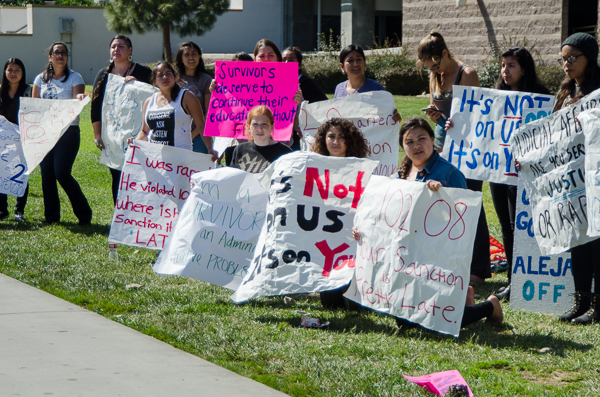 Protesters hold signs on the lawn outside the Student Resource Building, decrying UCSB’s alleged mistreatment of survivors of sexual assault and lack of adequate punishment of perpetrators. Vivian Bui/Daily Nexus

Students gathered for a sit-in outside the Student Resource Building on Monday in protest of the university’s alleged mistreatment of sexual assault survivors and lenient punishment of perpetrators.

Alejandra Melgoza, a second-year Chican@ studies and history of public policy double major, organized the event in response to the alleged mishandling of her case by the Office of Judicial Affairs when she reported she had been sexually assaulted. Melgoza claims she was repeatedly silenced and mistreated by Judicial Affairs staff, with her assailant receiving a suspension for two academic quarters and set to return to UCSB this upcoming fall quarter to continue his studies.

Amidst protesters’ loud chanting, Melgoza said she was discouraged by Judicial Affairs when she reported she was sexually assaulted.

“I was raped in my dorm on January 18, 2014,” Melgoza said. “I ended up sitting down with a Judicial Affairs officer and unfortunately she discouraged me greatly. She said there was not enough evidence — that it might be a long and arduous process, implying that I would never win.”

If I cheat on a test, I am going to get suspended on the spot. But if I violate someone else’s body, that is not seen as something serious and the consequences are for a lifetime. – Alejandra Melgoza

According to Melgoza, universities across the country are failing to properly address reports of sexual assault and provide support to survivors.

“I couldn’t stay silent because it’s such a huge problem,” Melgoza said. “Universities across the nation are protesting this because people are angry that such a horrible violent crime is not being treated seriously. If I cheat on a test, I am going to get suspended on the spot. But if I violate someone else’s body, that is not seen as something serious and the consequences are for a lifetime.”

The university has released a statement on the matter, refusing to comment on the individual case but affirming the services available for students experiencing sexual assault.

“In order to protect the privacy of individuals, and to encourage future reporting of cases, we do not discuss details of individual cases. The University provides individuals with confidential advocacy services through CARE, our Advocate Office for Sexual and Gender-Based Violence and Sexual Misconduct,” the statement reads.

The university also affirmed its adherence to UC policy and state and federal law.

“We have a thorough student conduct process that we recently strengthened by moving sexual assault investigations to our Title IX office in accordance with UC policy and government guidelines. We take concerns raised by our students extremely seriously and as such we look forward to having an opportunity to meet with our students involved in today’s action to continue to discuss their concerns in detail.”

Protesters called for UCSB administration and the UC system to restructure sexual assault policies and sanctions to allow for harsher repercussions for sexual assaulters and improved support for survivors. With these changes, protesters hope to eliminate the culture of silence surrounding the issue of sexual assault.

“The only things the university can do are suspensions, expulsions and bans from campus — none of which they do very well,” Kauffman said. “I’ve personally never heard of anyone getting expelled for sexual assault. The maximum consequence for people who are found guilty of sexual assault is a two quarter suspension.” 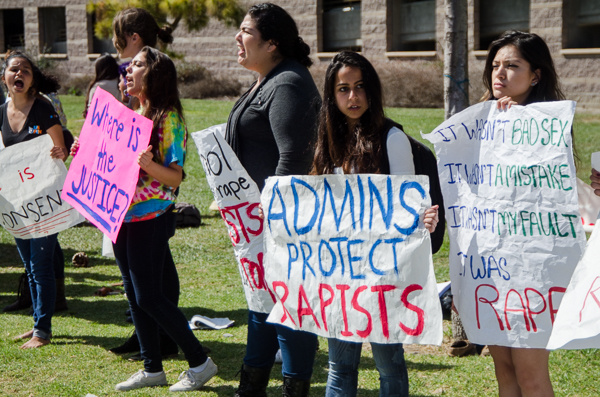 According to Kauffman, staffers of the university’s existing support system for survivors are not properly trained and should be more accommodating to those who have been sexually assaulted.

“There is just consistent mishandling — the people who work in these spaces like the Judicial Affairs Office are obviously aren’t trained on how to talk or work with survivors,” said Kauffman. “When you’re going through a process that takes over a year and you’re constantly asked things that trigger you to think about something painful, that’s a big deal.”

According to Tanya Cortez, a friend of Melgoza and second-year math major, when Melgoza went to pursue the case, Judicial Affairs allegedly reported no longer having evidence of the case.

“Her perpetrator left for personal reasons and when he came back, that’s when she felt very uncomfortable,” Cortez said. “She went again to pursue it … and they had like no records of their case. She had already reported [the crime] in spring, and they had no idea where this case was.”

At the end of the day, life doesn’t stop. – Alejandra Melgoza

Second-year sociology major Marlene Alcantar was among the line of students holding giant signs to protest the mistreatment of survivors and said change needs to be implemented across all UC campuses regarding sexual assault policy.

“I’m here to support Alejandra but also any other survivor that the system has not given justice to,” Alcantar said. “I wish the system was not so lax.”

Melgoza said every survivor goes through different experiences and must do what is comfortable for them to move past their experience.

“Finding a way to empower yourself is the best way to make this happen; for example, I just released myself to social media,” Melgoza said. “At the end of the day, life doesn’t stop. I want to make sure that these policies are enforced so I can keep moving on with my life and reach my goals.”

[Update: A previous version of this article state the university did not return requests for comment. The university’s public affairs department released a statement on the case yesterday. This article has been updated accordingly.]

`If I cheat on a test, I am going to get suspended on the spot. But if I violate someone else’s body, that is not seen as something serious and the consequences are for a lifetime.’ This is not at all accurate. Suspensions for cheating are very time consuming too. I agree that sexual assault is a huge problem at UCSB. Here is an economical solution: prohibit all sexual contact between UCSB students. At any accusation, review only whether any portion of either student’s behavior was voluntary. Expel or suspend any student participating in voluntary sexual contact. A huge amount… Read more »

Sex is a healthy, natural act that provides joy and stress relief to many people. It is not to be confused with rape, which is a crime. In what ways do you feel instruction is poor? I don’t think you understand how funding works. Professors aren’t slacking because we are improving in other realms of UCSB, i.e. support to survivors and events that are alternatives to trashing IV. Also, the whole issue here is that Office of Judicial Affairs is claiming that they don’t have evidence to prosecute the rapists. How would that be any different if sexual behavior was… Read more »

Of course you are right, but TAs now at UCSB teach many more students per class and per quarter than 10 years ago. Many departments cannot grade work anymore, or do so at a much reduced rate. Professors who teach the large courses do so for a few years now and then burn out.

UCSB simply does not have the resources for adjudicating sexual relation problems, unless the process is vastly simplified.

Not in the middle
Reply to  inthemiddle

Just saying, the point totally went over your head.

And I guess while they’re at it, the school should try to prohibit swearing too.

My point is utterly simple: UCSB simply does not have the resources to adjudicate complex sexual assault cases. I know very well how the UCSB budget works, and indeed, for the last 15 years really, there has been a systematic defunding of instruction here. Go look at any of the shabby lecture halls and instructional rooms and compare them with the relatively plush Student Affairs building. Judicial Affairs has nothing close to the resources required to do a good job at investigating and prosecuting sexual assault cases, or counseling survivors adequately. And that is the main point of the protest…… Read more »