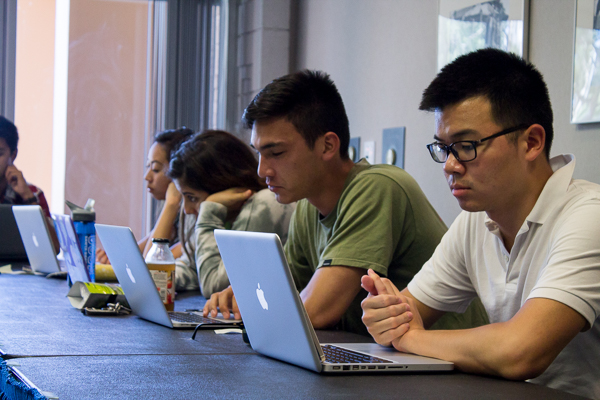 The Associated Students Finance and Business Committee met yesterday in the State Street Room in the University Center to hear funds requests from eight student organizations.

The committee voted to partially fund one organization, table two requests indefinitely, recommend one organization to seek funding from senate and not fund four requests. They started the meeting with $12,009 in the culture weeks and graduation fund, $3,196 in the senate unallocated fund, and zero dollars in all other funds including the sports teams, OSL and Student Initiated Outreach Program (SIOP) funds.

Mujeres Unidas por Justicia, Educacion y Revolucion (M.U.J.E.R.), an advocacy group for Chicana and Latina students, requested $3,006.60 for the food and venue for their annual MUJERcitas conference, which has brought in around 150 high school girls each of the past three years.

Committee chairman and third-year history of public policy Jimmy Villarreal said the committee had to deny M.U.J.E.R. of all funding, because their request would come out of SIOP.

UCSB Cycling Team president Richard Lo requested $1,000 from Finance Board to offset the cost of airfare to road nationals, as the team has been unable to get funding from other sources.

“We are looking to send four men and three women to road nationals in May,” Lo said. “We have already looked at rec sports and other external funding, but we haven’t gotten any.”

Villarreal said the committee had no money to grant the team.

“We are zeroed out of our sports funds, but we will discuss if we can find any other source,” Villarreal said.

The Film Studio requested $500 for purchasing food, a red carpet and rental of I.V. Theater for their upcoming annual festival.

“We are currently organizing our fifth annual Santa Barbara Digital Film Festival,” the representative said. “The event is open to the entire campus. Anyone can submit.”

The committee motioned to deny the Studio all requested funds and suggest they take their request to senate.

“It is already a small club, and it is mostly made up of the officers, which are either graduating or studying abroad next year,” the representative said. “We are really looking to recruit new students, because recently we have made a lot of progress in what we have been able to do for breast cancer awareness.”

The committee denied the club’s request, but committee advisor Cindy Lopez suggested they request the $250 startup, which they would be guaranteed to receive if they meet the basic criteria.

The Japanese Language Café (JLC) requested $280 for food and drinks for their quarterly potluck and karaoke party, which is historically their biggest event, but the committee denied their request.

According to Villarreal, the committee’s shrinking budget restricted all of their decisions.

“We are getting toward the end of the year, so we’re low on funds now,” Villarreal said. “We allocated them to all the different student groups and we’ve had a lot of nice events.”