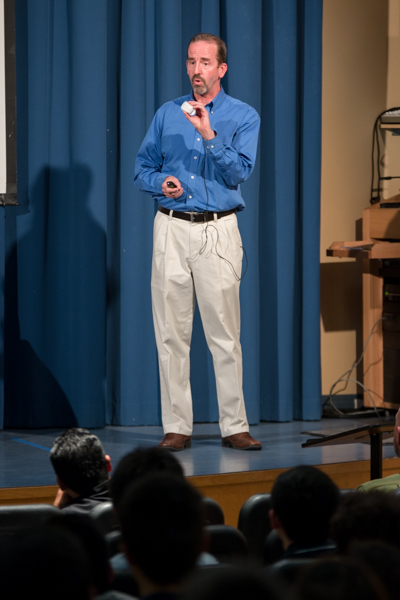 Five professors from various university departments spoke about recent developments in their research and other ideas at the third annual UCSB TEDx talk on Saturday in Embarcadero Hall in Isla Vista.

Technology, Entertainment, Design, or TED, is a nonprofit organization aimed at spreading general knowledge about the world and new ideas through a series of conferences. The organization hosts a main event every year in Vancouver, Canada, but also promotes independently organized events on a local scale called TEDx. This year’s TEDxUCSB is titled “Unveiling the New: In the Pursuit of the Next” and was organized by the Regents and Chancellor’s Scholars Association (RCSA).

“TEDx breaks through the brilliant shroud that surrounds all this knowledge and allows us all to see it, allows us to think about it, allows us to spread it around,” Trout said. “‘Ideas worth spreading,’ that’s the TED motto.”

The attendee application required potential audience members to submit their own idea worth spreading, and answers were projected onto a screen as audience members entered Embarcadero Hall. The submissions ranged from the colonization of other planets to healthcare reform and the emotional struggle of the research process.

Rios, the first presenter, spoke about the need to reassess current education strategies in order to effectively teach millennial students. According to Rios, this generation is considered by some authors and scholars to be the “dumbest” and most “narcissistic” generation yet, an idea he said he disagrees with.

Rios said the key to educating a globally connected millennial generation is to modify current strategies of education to be more emotional, citing studies that found millennials are more focused on personal connections and making an impact on society, rather than earning more money at the expense of others.

“When we teach to the heart, the mind follows,” Rios said. “When we connect with [students] in an emotional way, in a compassionate way, it opens up avenues for them to learn in an academic setting.”

Doyle spoke next and discussed his 20 years of research in control engineering, including the creation of an artificial pancreas to automate insulin delivery in patients with Type 1 diabetes based on a concept called feedback control.

“If I were to break down feedback control into a very simple definition, it’s these three words: ‘sense and respond,’” Doyle said.

According to Doyle, insulin pumps and glucose sensors are currently available to help diabetes patients, but only focus on either the sense or respond parts of the equation.

Doyle also said using a control algorithm in a chip or tablet connected to the sensing and responding technology allowed his research group to create a device to monitor and secrete insulin to stabilize the patient’s blood sugar levels to be in a healthy range, closing the feedback loop broken by diabetes, and thus treating a disease that currently affects millions.

“The improper secretion of insulin leads to diabetes, which is a worldwide problem,” Doyle said. “It probably touches many of you in the audience, unfortunately. Friends, family members, neighbors — close to 400 million people in the world suffer from diabetes, and about half of them aren’t even diagnosed.”

“It’s biochem — it’s literally what I like, and he’s applying it to a real world situation,” Battu said. “It’s really innovative and state-of-the-art — the top of his field.”

Franklin’s talk focused on the growing, education-based gap between economic classes and how computer science, an increasingly important field, can help close this gap. Franklin said she believes computer science can be used to combat inequality by integrating it into fourth-through-sixth-grade curriculums, exposing underprivileged children to computing early in life.

“All of these children would see that everyone can do it,” Franklin said. “There is nothing special about being in computing. Anyone can be in computer science.”

Franklin said she and a team of computer scientists created a summer camp called Animal Tlatoque, which combined educational workshops on culture, art and computing and, according to surveys, successfully heightened children’s interest in computer science.

“By integrating computer science into an engaging, interdisciplinary camp we could really get students to get excited about it,” Franklin said.

“Emotions are very confusing because we have a whole culture in the West which makes fun of emotions and ignores them and says they’re not important,” Scheff said. “When they do happen, they’re a pest.”

“It’s a field that is harassed, especially in English, by the ambiguity and circumstantial grasp of emotion terms,” Scheff said. “Pride can be a good thing. You should be proud your children accomplished so much, but it can also be the seventh deadly sin.”

According to Scheff, each emotion has a different signal of resolution — a different way the hormones produced by the emotion are metabolized by the body — and this signal is the healthiest way to deal with emotions.

“When you’re talking about grief — if you lose someone that’s close to you, your body prepares to sob with tears … if that is delayed, you feel grief … fear, grief, shame, anger are not negative when they’re not obstructed,” Scheff said. “They go through your body — they’re something you need to do, just like breathing.”

Duque spoke about reformulating common complaints about the educational system and trying to make the educational community understand that the current system shrinks students’ worlds by encouraging them to become competitive and answer-focused learners.

“I think we mostly have things we can agree on when we think about school. School works for some kids and doesn’t for others,” Duque said. “We’ve got a collection of complaints about schooling but … then what?”

Duque said he built a new set of complaints when he examined a kindergarten class in a dual immersion Spanish-English school designed to give underrepresented children a better chance to succeed academically. According to Duque, the students initially sought out other students to learn with, but the openness had decreased by January of the school year.

“It begins to look like the children have learned that the world is not only theirs to explore, but that other people are either competitors for a place to declare what they know or they’re people who already possess knowledge,” Duque said. “Other people are threats and at least part of the time, other people are to be feared.”

According to Duque, students’ passion for learning can only be encouraged by drastically changing how the students are formally taught.

First-year economics math major and volunteer for the TEDx event Dixon Bourne said the event taught him to be more courageous.

“I’m going to try to be less cautious,” said Bourne. “Just try things and not be afraid to fail. That’s probably one of the biggest things I learned.”

Eric Seeberger, a second-year mechanical engineering major and TEDx attendee, said his “idea worth sharing” is about the increasing importance of finding sustainable energy solutions.

“I think that the most important technology we should be researching is becoming energy independent,” Seeberger said. “Solar power is important and in the far future, nuclear fusion would probably be the best way to sustain that.”

Third-year electrical engineering major, Event Coordinator and Speaker Liaison Mary Alice Callaghan said she was amazed by the wealth of opportunities and ideas available to students in everyday life.

“What I took away from this conference, even more so than last year, was that there are just so many great minds and great opportunities on this campus — these great talks came from professors on our campus,” Callaghan said, “You think of TEDx as this really cool, once-a-year event that you come to experience these ideas, but they’re really out there all the time if you just go looking for them.”

According to Trout, the TEDx model is important because it shares cutting edge ideas while fostering a sense of community.

“TEDx embodies a mission that is important to me and important to all of us,” Trout said. “Not only is it presented to the community, TEDx is made by the community. Speakers of the sciences, arts and humanities — they all come together and present their ideas to you. They unveil the new and they allow all of us to pursue what’s next.”

Trout said this year’s TEDx is especially important to him because TEDx 2014 was the last time he would see high school friend Chris Martinez, member of last year’s TEDx crew and victim of last May’s shooting.

“When he [Martinez] found out we were putting on the TEDx event, he was so excited to be a part of it, to be part of what it was, part of what this is,” said Trout. “This TEDx is important to me personally now because it involves him. However, I would rather celebrate his life and what he did by showing you all awesome things rather than mourn him for too long.”