The Daily Nexus
News
Divestment Resolution Passes to A.S. Senate
April 10, 2015 at 1:11 am by David Jackson and Peter Mounteer 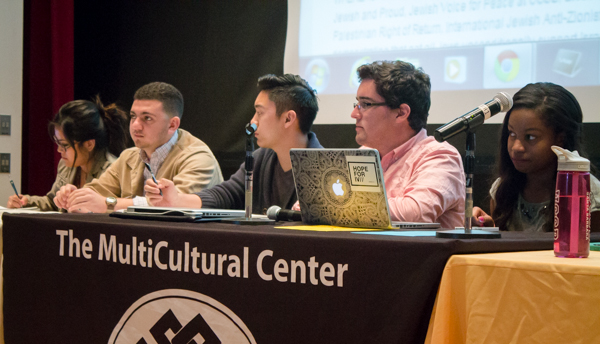 The divestment committee listens to people express their thoughts regarding the issue with the Jewish holiday next week at the meeting at the MultiCultural Center. Paris Cullen/Daily Nexus

The Associated Students Senate External Affairs Committee formally passed to the A.S. Senate, by a secret vote of six-to-one, a resolution to divest from companies profiting from human rights violations in the Israel-Palestine region.

The one dissenting vote, made public shortly after the vote was taken, came from off-campus Senator and third-year student Michelle Moreh. The resolution, sponsored by Students for Justice in Palestine (SJP), urges the UC Board of Regents to withdraw its investments from companies selling arms and weapons to the Israeli government for or by the Israeli military on the grounds that such companies profit off of the military occupation of Palestinian-controlled territories, and that such investments are contrary to the obligation of the UC to promote equality and human rights for all.

This is the third year in a row a divestment resolution related to the Israeli-Palestinian conflict has been brought before the Senate, with prior iterations of the bill defeated in the past two years. The Senate is expected to vote on the resolution at their weekly meeting next Wednesday.

Rabbi Evan Goodman, executive director of Santa Barbara Hillel, said the idea of tabling the resolution came in light of Yom HaShoah, or Holocaust Remembrance Day, which takes place next Wednesday and Thursday.

“While this resolution has been moved to committee and is expected to go out to the student senate, there are those who bring forward the idea that there is a Jewish holiday next week that would require it to be pushed another week,” Goodman said. “There is no one who is not Jewish who can tell me or the Jewish community that our holiday … is a reason not to bring this forward.”

“Actually, it’s really patronizing for someone to have proposed that there are Jewish reasons, … that they, out their sensitivity for me and my community, would not want to bring it up,” Goodman said. “So I urge you to pass this out of committee so the Senate can deal with it and the campus can go on to dealing with this and other issues.”

SJP member Nia, who requested to not have her full name disclosed, said she supported tabling the resolution for an additional week in light of Yom HaShoah.

“It’s SJP’s mission to work against all forms of oppression, so we feel it’s really important to recognize that and honor that day for all Jewish students, and just let them know that we stand in solidarity … and recognize that and push it back another week so that it’s not at a time when a lot of people are sensitive,” Nia said.

Second-year psychology major Niki Elyasi said she found it “patronizing” and “offensive” to push the resolution vote back another week.

“First of all, the week after week four, April 23rd, is Yom Hazikaron [Day of Remembrance for the Fallen Soldiers of Israel and Victims of Terrorism], so if you are doing your Jewish holiday searching you didn’t do an amazing job because … you’d have to wait ’til week five if that’s your logic,” Elyasi said. “Also to say that you are standing in solidarity with Jewish students when Jewish students feel attacked by a resolution that you’re bringing up to me is just a little bit ridiculous.”

Moreh said she was concerned about the BDS (Boycott, Divestment and Sanctions) movement’s insistence upon the “Right of Return” for the 700,000 Palestinian refugees that are said to have been forcibly removed or evacuated from the territory that now constitutes the political boundaries of Israel.

“If the Palestinians who no longer live in Israel were to return to Israel that would mean Israelis would be a minority, so Israel would cease to exist in its current state,” Moreh said. “To my understanding, that would mean the end of Israel.”

Second-year sociology major and co-author of the divestment resolution Anumita Kaur defended the passage of the resolution and said allowing Palestinian refugees return would not threaten Israeli sovereignty.

“We at SJP (Students for Justice in Palestine) absolutely stand by the Right of Return,” Kaur said. “We believe the people that were kicked out of their homeland have the right to return. However, I do challenge the notion that that would destroy the state of Israel altogether.”

Kaur also said she believes in the right of self-determination for both Israelis and Palestinians.

“I don’t think that one people’s self-determination has to mean the end of another’s,” Kaur said.

Second-year political science major Stevan Abdalmalik said he advocated for the ability of students from both the Jewish and Palestinian community to make an effort to listen to empathize with one another.

“I’ve been able to have real dialogue between both the Jewish community and the Palestinian community,” Abdalmalik said. “I highly encourage all of you, no matter how much you personally believe in your cause, to reach out across the aisle and to have open conversation that starts with unification between the two sides.”

According to Abdalmalik, after engaging in discussion about divestment with students from both sides of the issue, he was able to find common ground.

Stupid fucks. Now our school is going to stick the middle finger to the company that hires so many of its engineering graduates.

1) The decision to postpone the vote from Holocaust Remembrance Day to Israel’s Memorial Day for fallen soldiers and victims of Terror to “show solidarity with the Jewish community” is actually a slap in the face to the SB Jewish Community, as the Divestment resolution itself is an attack on the Jewish Community and on Israel’s existence. 2) The author’s assertion that the resolution calls for Divestment from companies that “sell arms and weapons to the Israeli government” is false, as out of all the companies listed on the resolution, the only one that could feasibly be argued to be… Read more »

Hmm, interesting. Why would the pro-Israel community insist on bringing this to a vote next week? They’re not fooling me. Its part of their strategy to portray the pro-divestment community as anti-Semitic bigots who would push for divestment (as if fighting for justice is wrong) near a holocaust remembrance day. They are dirty and nasty, but its how they work. They will do and say anything to stop it, even in the face of the facts. Facts aren’t on their side, so they use offensive rhetoric. now we will here them reference Nazi’s, Hitler, among other things (which has nothing… Read more »

Trying to demonize, delegitimize and apply double standards against a pluralistic, tolerant and democratic state such as Israel, by siding with genocidal groups such as Hamas, Hezbollah and Iran, has nothing to do with human rights. It is just raw, undisguised anti-Semitism.

BDS is an anti-Semitic, racist movement, plain and simple. There are 49 Muslim majority countries in the world that identify themselves as Muslim and where Islam is considered the official religion of the state. But the BDS movement doesn’t seem to have a problem with that. They have a problem with only one nation, the Jewish one, which they wish to be supplanted with yet another dysfunctional Muslim state.

Today Muslims slit the throat of UN workers, they gang-raped black Animists in Mali, they burned Hindus alive in Pakistan, and they bombed an outdoor market in Somalia.
++
Woe to those who call evil good and good evil,
who put darkness for light and light for darkness,
who put bitter for sweet and sweet for bitter.