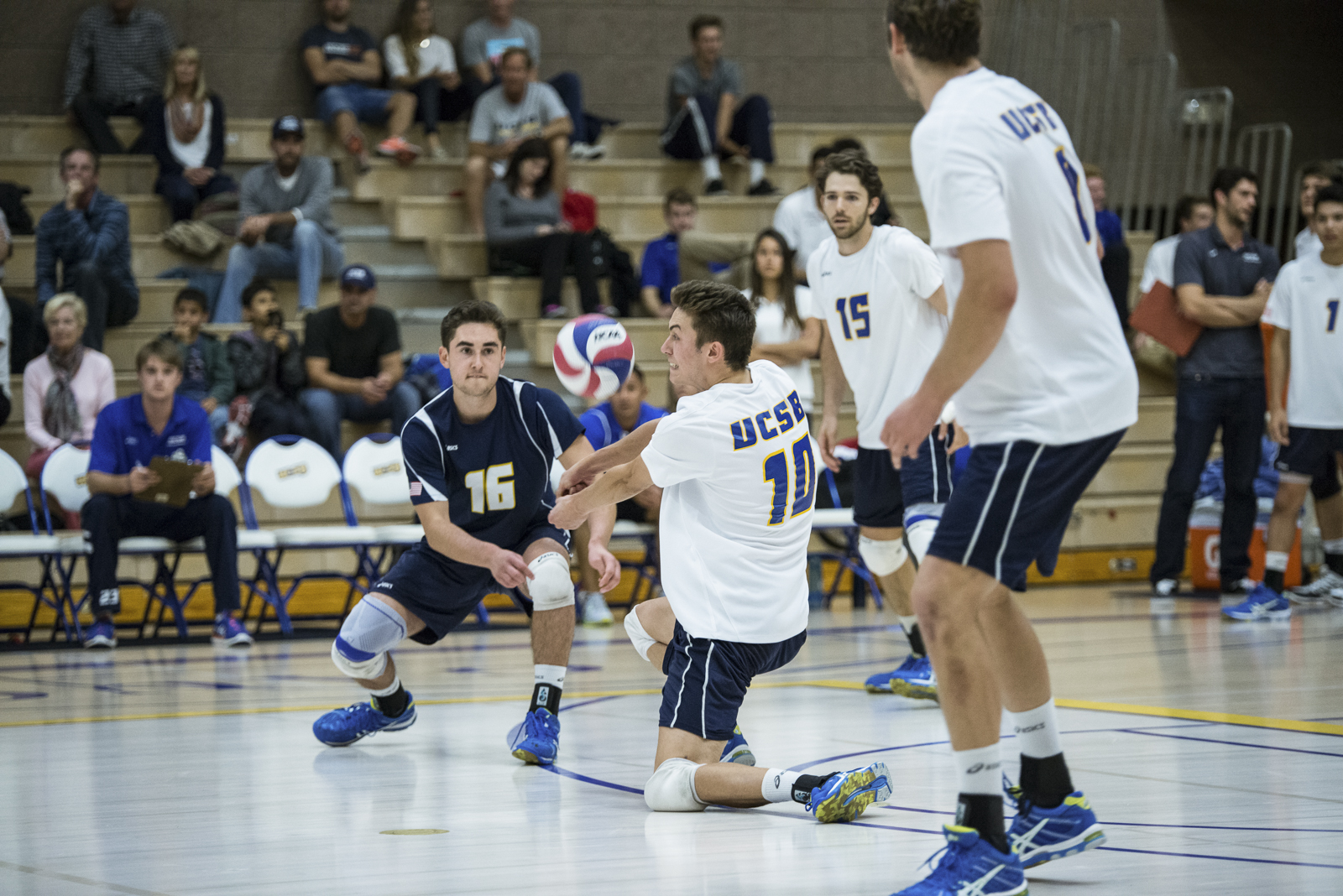 It’s hard to call any loss a “good loss,” but this one almost felt like one for the UCSB men’s volleyball team. No. 4 UC Irvine defeated No. 9 Santa Barbara last night in Rob Gym in five sets, as the Gauchos played an extremely hard fought match against a team that would be a lot of people’s picks to win the national championship this season.

The loss brings UCSB’s record to 14-9 overall and 10-9 in MPSF. The squad currently sits in fifth in MPSF standings, as it tries to finish in the top four in order to gain a home court match in the first round of playoffs with three matches left. UCI’s record now stands at 23-4 overall and 17-3 in MPSF as the Anteaters battle with Hawaii for the top spot.

“I thought that we improved a lot from the last time we played these guys,” Head Coach Rick McLaughlin said. “Game five was all them and they deserved it. They played unbelievable, and we didn’t have a chance and that’s why they’re where they are … It’s no surprise that they’re at the top of the league.”

The Gauchos came out of the gate with a high level of energy that must have come from their nine days off since their last match. Playing the role of the underdog, Santa Barbara surprised the Anteaters with an extremely strong first game, winning it 25-20. They took the set amidst a low hitting percentage at .152, instead backed by the team’s strong defense led by junior setter Jonah Seif’s eight digs.

Games two and three didn’t go as smoothly for the Gauchos, with UCI winning both, 25-23, 25-22. Senior libero Michael Brinkley played an amazing match on defense with 19 digs in total. Sophomore outside hitter Tamir Hershko added 11 digs along with nine kills.

Senior opposite Zack La Cavera was a force the entire night for UCI. The lefty hit 22 kills on 43 attempts, consistently acting as senior setter Roberto Frazzoni’s go-to hitter. The Gauchos had a difficult time blocking and defending him the entire night.

“La Cavera is a great player, and he stepped up and had a great match for them tonight,” senior outside hitter Kevin Donohue said. “All we can do is learn from this and next time hopefully we can slow him down a bit.”

After the Anteaters went up 2-1, the Gauchos fought back to win the fourth set 25-21 and send the match to a decisive fifth game.

In a match which looked to end with suspense, the opposite occurred as UCSB was never close in the set, ultimately losing on a missed serve from sophomore opposite Jacob Delson.

“We have to receive serve a little better at the bigger times,” McLaughlin said. “They stepped it up; credit to them, because they served some bombs in game five but we have to match that every step of the way.”

The Gauchos now look towards their next match on Friday night against UC San Diego.  The Tritons are 2-23 overall this season, 0-19 in MPSF matches. It will be a match the Gauchos will hope to take quickly before focusing on Pepperdine and Stanford next week to close out the regular season. The match is UCSB’s last at Rob Gym this season and the team will be honoring its seniors before the first serve.
UCSB takes on UCSD Friday at 7 p.m.

A version of this article appeared on page 12 of April 9, 2015’s print edition of the Daily Nexus.