The Daily Nexus
Music
Estrogen Levels on the Rise: Rainbow Girls and The Wild Reeds Play SOhO
April 9, 2015 at 3:54 pm by Brianna Guzman 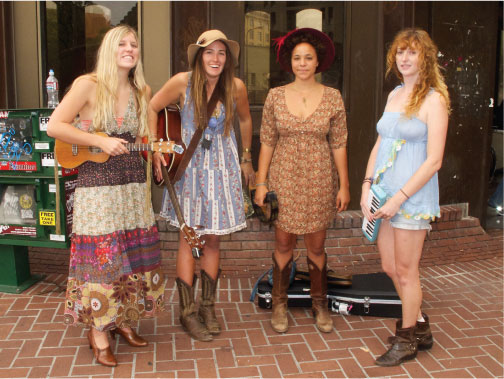 “We wrote this song after some guy told us we should be backup singers.” This sentence left the lips of one of the members making up Rainbow Girls as they delved into the song “She-Bop Nation.” The audience was instantly transported to the sights and sounds of the ’60s and ’70s. Rock ‘n’ roll, funk and gypsy sass radiated through SOhO Restaurant and Music Club as the ladies showed the audience what they were made of, which does not amount to “backup singers.”

Local I.V. legend Rainbow Girls consists of four badasses: Caitlin Gowdey, Erin Chapin, Vanessa May and Savannah Hughes. Clad in velvet bell-bottoms, each member brought their own presence to the show while never outshining their fellow lady performers. The group was founded following an open mic night in 2010, and they have toured all over the States as well as busked through the streets of Europe.

Rainbow Girls released their debut album in May 2013, and since then, their community of loyal followers has grown. All throughout the night, audience members rocking retro clothing swayed to the tunes. During an empowering song about how fun it is to be naked, a man with dreads gathered in a bun — dubbed “Pineapple Head” by a fellow fan — danced without a care in the world.

The evening continued on with a slew of songs like “Old Man Goat” which featured keyboards, bass, guitar and a dash of tambourine. The diverse set of instruments the women play includes the accordion, harmonica, banjolele, mandolin, bass, cello, keys and the ukulele. Vast instrumentation sets Rainbow Girls apart from your average girl band.

To heat up the night, indie folk band The Wild Reeds came on as openers. The delicate harmonies of the lead ladies were what some people might call “on fleek.” But I won’t attribute the term to The Wild Reeds, because the words don’t do them justice. Their harmonies were flawless. Kinsey Lee, Mackenzie DeWolfe Howe, Sharon Silva, Nick Phakpiseth and Nick Jones proved that an opening act doesn’t always equal bathroom break before the show. The soulful group kept everyone on their feet with their folky tunes about love and life. “Where I’m Going” and “Of All the Dreams” stood out as favorites of the crowd, which ranged from 21 to 45.

After the sets, both bands were easily accessible at their merch tables, friendly and eager to meet fans. Full of charm and truth, the acts brought a lot to the table. Songs about love, loss, being naked and being empowered as women echoed through the dimly lit venue as drinks clanked and the crowds cheered. It was a memorable night, to say the least.

Those cowboy boots in the middle are the coolest things i’ve ever seen. Not the short booties, though, we can ignore those ones.