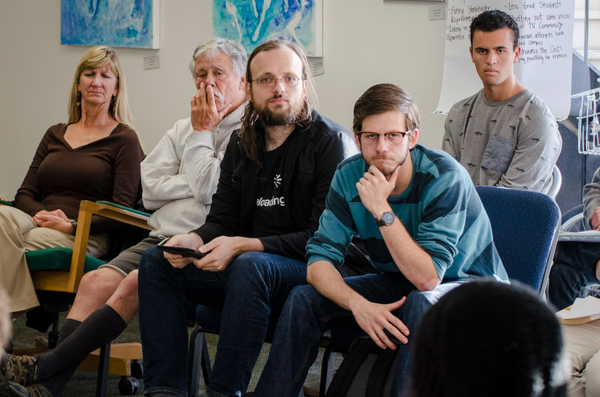 Residents and students look on as meeting discusses topics such as county representation on the proposed I.V. governing board and the results of this year’s Deltopia. Alex Nagase/Daily Nexus

Williams’ Assembly Bill 3 (AB 3), introduced in December to create a CSD for I.V. by act of the state legislature, will be amended to include more detailed plans for the proposed special district before it will be voted on. Tuesday’s meeting was part of a series of meetings that have been hosted by Williams to establish and clarify the bill’s language regarding the creation of a CSD. During this Tuesday’s meeting, stakeholders discussed the extent to which students should be allowed to be involved in self-governance, whether or not county representatives should be on an I.V. governing board and the events of last weekend’s Deltopia festivities.

Associated Students Executive Vice President for Local Affairs (EVPLA) and fourth-year psychology major Cameron Schunk said he is in favor of having self-governance representatives from both the university and the county holding positions on a governing board for the CSD.

“I want the cooperation of UCSB and the county. Basically, I want their advice,” Schunk said. “That’s a big part of it for me. There are a lot of complicated things that we want to do with this CSD and I think that both entities have expressed that they might be comfortable with an ex officio seat.”

I.V. Recreation and Park District (IVRPD) board member and long-time I.V. resident Pegeen Soutar said any group with an interest in I.V. governance can run a candidate for the board.

“If there’s other entities … that have a real concern about what’s happening at that level, they’re going to find a candidate and they’re going to put their support behind that candidate,” Soutar said. “That is the electoral process and I don’t know if we need to make it super complicated.”

IVRPD board member and fourth-year global studies major Jacob Lebell said the university and county’s support will be necessary to form a governing board.

Esther Aguilera, Representative for Santa Barbara County Third District Supervisor Doreen Farr, said Farr’s stance on the proposed governing board will not be stated until Williams’ final version of the self-governance bill is signed into law.

“What I see is her [Farr] waiting until the government signs it [AB3],” Aguilera said. “When that’s signed she will decide whether to endorse it or not. I think as it stands right now she’s undecided.”

Alumni Affairs Office Assistant Vice Chancellor George Thurlow said the two organizations he is a member of, the Chancellor’s Coordinating Committee and the UCSB Foundation Board of Trustees, are in favor of I.V. self-governance, but are awaiting to see what the final plans are before endorsing the stakeholders’ plans.

“Those two very big players at the university are committed to a process that brings greater self-governance for Isla Vista,” Thurlow said. “What’s not clear I think is, ‘What is that? What form does that take?’ And we’re still not sure what exactly the chancellor can do vis-à-vis a piece of legislation. There’s still some huge questions that aren’t answered. … Finances and boundaries and board makeup.”

“We’re all being asked these questions: ‘What boundaries do you want? What board representation do you want?’ We’re all providing our opinions, in some cases impassioned arguments,” Freeman said. “But the university and the county … are in some ways not participating in the process that we’re having right now because they’re simply saying, ‘I’m waiting for you all to come up with what you want and I’ll say yes or no.’”

In the discussion on the differences between this year’s Deltopia compared to last year’s riots, Schunk said the reduction of crowds by half and the number of medical transports dropping from 50 in 2014 to only nine this year is evidence that I.V. residents are taking charge of the event.

“I think what we proved to them is that we can add our own structure to the event and the community can really come together and take charge of some portions of it,” Schunk said. “Over time I’m hoping the police force can be reduced and the police feel it is less of a necessity to be here.”

A.S. Senator and second-year history of public policy major Paola De La Cruz said she noticed a difference in the amount of trash on I.V. streets during the cleanup process the day after Deltopia.

“When we went out to clean for Adopt-A-Block compared to last year the amount of trash that was on DP and other streets was just, like, ‘Oh my gosh, did Deltopia even happen?’” De La Cruz said.